Michelle Obama is more than just a dress 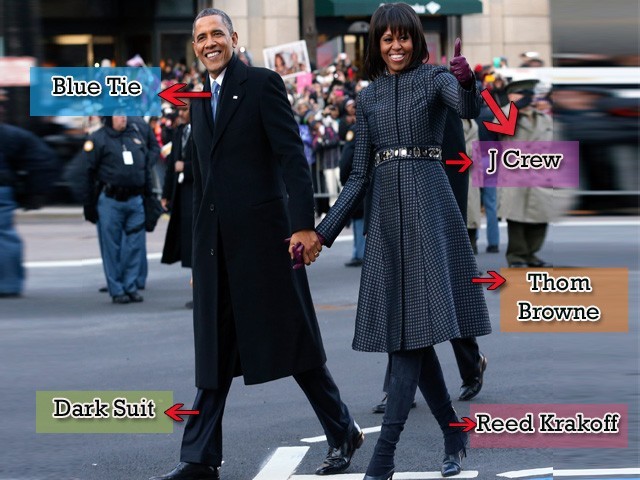 We were too razzle-dazzled by her new bangs to even notice her remarkable achievements.

Yes I admit, after spending eight hours at a news desk in Pakistan, I curled up in front of my laptop –to follow more political theatre – in this case President Barack Hussein Obama’s (BO) second inauguration.

Since The Guardian does great ‘live text’, embedded with videos, tweets, and (to-be) memes, that’s where I was keeping up with the Obamas.

By the time I checked BBC and elsewhere, I not only knew ‘who’ she wore, but also what Natasha and Malia were wearing!

I understand tracking fashion is all good fun (and good money for Thom Brown and J Crew) but Michelle Obama is more First Lady, than “mom-in-chief” and definitely more than just a dress.  She worked for the eighth largest revenue-generating law firm in the US. Take it from someone who worked on legal ranking guides for a living, that’s no mean feat.

Richard Adams was curating The Guardian feed and I was a bit peeved by the time I tweeted:

And as fab as the rest of the chatty Guardian writers, he replied:

He posted my tweet on the live-text feed as an observation. We both rooted around and neither of us could find a more detailed description than ‘dark suit’ for what President Obama wore. By then I was slightly (or maybe quite) irate.

There it was. Again.

A female figure in a position of influence and after four years of living in the public eye, for some she remains a cut-out doll to draw dresses on (Jason Wu got to do it twice, GO Wu for hogging First Lady fame.) She didn’t overcome racial biases and work in a high-powered law firm or put her career on the back burner to skillfully raise campaign funds or persuade multinationals to support her healthy-lunches-for-kids drive.

We were too razzle-dazzled by her new bangs.

US Secretary of State Hillary Clinton is more than just a former first lady, she runs the United States Foreign Service at a time when US foreign involvement is critical to political (Arab uprisings) and economic hotspots (the Eurozone). And she did it all in a range of colourful power suits.

It was a sad but honest moment when in an interview in 2010 she admitted maintaining appearances “will be an additional requirement” for women which they will have to meet. On the same occasion the moderator asked which clothes designer Clinton preferred.

Secretary Clinton replied, “Would you ever ask a man that question?”

So it only made sense when most recently she went ‘au naturale’ – no make-up, just her black frames and floppy hair. The media went dizzy trying to catch its tail as one side gave her a ‘whoot whoot’ and the other frowned. She laughed off the attention, because if Clinton walked into the Situation Room in flip flops, they’d still pull the trigger.

Bringing this closer to home, Pakistan Foreign Minister Hina Rabbani Khar became a household name, not for ground-breaking (if any) policy gains but for carrying a Birkin on an official trip to India.  While social media twittered and tweeted, most people didn’t care to question her credentials – if she was capable enough, capable at all.

I wish I knew how Khar responded to the furore over her fashion. Or I wish I cared. What I do care about when it comes to Khar is, will she disarm an escalating situation between India and Pakistan over the line of control (LoC)? Or have we relegated her to be the face behind which the real work is done by ‘the men’?

So, yes. Fashion is business which Michelle Obama can promote with the gentle wave of a J Crew-gloved hand. Or Asma alAssad can crush under a bloody Louboutin heel.

But really, are we so brainwashed and so mired in old-fashioned muck that we cannot see a female in power for who she is and not who she wears?