Diary of a candid teenager 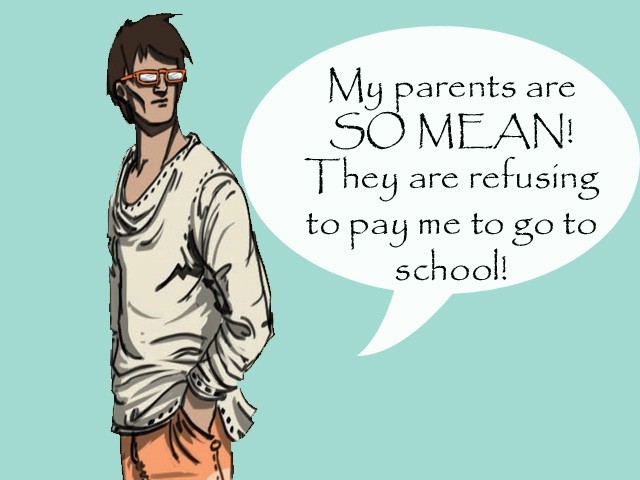 They act like I am their step-child! ILLUSTRATION: JAMAL KHURSHID

I told the man and his mad-about-fashion-wife that this thing was irrefutably not in my control. They refused to listen.

I was earnestly doing the most I could.

‘You’ve got to understand!’

The husband exclaimed again, wagging his index finger at me.

I am (or think I am) good at enduring callous words thrown at me by the husband, but certainly not the weapon owned by his wife; emotional blackmail.

It is not that I become sentimental and lose myself (that is so cool); it is just because she makes me go through all of this to torment me, obviously!

It is so annoying! If I turn my face away, she starts (forged!) sobbing and that irks me even more.

Did I mention that these two are something called ‘parents’?

I guess you guessed that already!

I offered them options – many options. Last month, for instance, I came up with a very reasonable choice; I asked them to pay me Rs3,000 (per subject of course) that they wanted me to study for.

I received point-blank ‘No!’

Well, they do not mind paying thousands of rupees to tutors (and offering them daily feasts) but they mind this.

Shame! When will they develop some sense? Things are not done like this!

I am not bad. I have no desire to break their heart (though they have shattered mine a couple of times.) It is my large heartedness and cool headedness that I take pity on them.

The hot-headed couple does not understand that they are crushing me; along with my independence they are taking my kind-heartedness for granted.

Just look at my age; I am so young!

I know how to nip the evil in the bud and I do it just right. I try to do the least possible ‘homework’ that I can. Thank God I have been ‘privatised’ by almost every school in the city and now I only have tutors to suck my blood – at least, I don’t have to wake up early and sleep early! I make it a point to count my blessings amidst my heart-ache.

But then, they accuse me of nasty acts. There are maids and servants in the house, but I just look like the most suitable target.

She ‘lost’ her purse and started accusing me. She thought that I had committed the malicious act because I wanted to buy a new pair of jeans the week before! Seriously, someday they will have to be accountable for their vindictive deeds.

Things are not going well. Perhaps, they want me to ‘take a big step’ like run away or even commit suicide; to be honest, the latter sends shivers down my spine.

The two say that I have run out of excuses and I am vulnerable – unable to prove my stance. Let me tell you, they don’t let me speak. They interrupt me so often that I forget my point. That is also why I remain on Facebook most of the time. It doesn’t ever interrupt me.

They treat me as though I am an adopted kid. Oh God! Why you did this to me? Sometimes I wonder if I was exchanged with a bad baby in the hospital!

The nurse must have been smart enough just as public hospital nurses are. They were not that rich back then and had to resort to public healthcare. Don’t worry, I am the one who has suffered the most; it is the good side, after all, which remains at a disadvantage.

However, I still wish that they had the bad baby – that they so deserve.

I am their only kid so it is quite likely that I am adopted (as back then they were not rich so family planning could not be something of their choice.) I wish I had siblings so that the wife and his husband would have more brains to cook, not just mine!

They have to listen; they will have to face consequences, otherwise. I have told them that the Supreme Court is out there, for me. Yet again, my considerate nature comes in the way. I don’t want them to spend their entire life in jail; worse, visit them on weekends in jail.

I don’t desire anything – I mean the grades and all that paperwork. I am a poor, humble being and I am doing this much for them, again my philanthropic spirit.

The results are going to be announced towards the end of this month –and believe me they are bound to be disappointed.

I will not be shocked, thanks to my foresight!

A freelance writer who has diverse interests ranging from politics to culture and society. Saanwal is a brilliant A’ level student, pursuing his study via the innovative practice of home-schooling.