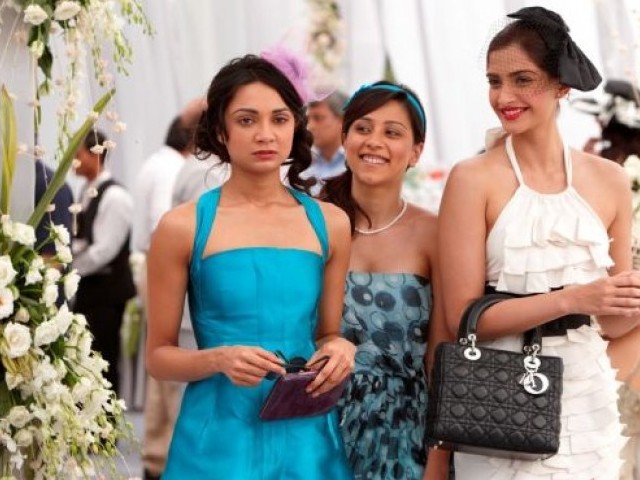 The biggest appeal of Aisha are the clothes

My sole purpose of watching Aisha, was to see how Sonam Kapoor who claims to be an avid Jane Austen reader would recreate her master piece ‘Emma’ on the silver screen. Alas! Aisha was no ‘Emma.’ Although it was an adaptation of the book, the film could very well be touted as a desi Sex and the City.

Aisha Kapoor (Sonam Kapoor) is the archetypal uptown girl from super rich Delhi. She’s smart,  sassy and devotes her time to animal rights, art exhibitions, polo matches and shopping sprees along with her newly found obsession – matchmaking. The film takes us on her journey of finding a suitable match for small town Shefali (Amrita Puri), where she tries to hook her up with a mithai scion’s son Randhir Gambhir (Cyrus Sahukar). But first she must transform this behenji into a diva with the help of BFF Pinky Bose (Ira Dubey). This challenge gets a tad bit difficult because of childhood friend Arjun Burman (Abhay Deol) who terms her new projects as a meddlesome mess. He is always on an ‘Aisha’ criticising spree.

However, Arjun is not the only hindrance in the girls plans. The entrance of Non-Resident Indian bombshell Aarti (Lisa Haydon) come feelings of jealousy, pride, ego sends our protagonist into a scurry.

Styling it with Bollywood:

Welcome to the life of the high flying rich young Delhi chicks that are sweet, svelte and stylish. The film completely dazzles with its style quotient. Rhea Kapoor comes across as quite a benevolent producer as each frame is picture perfect. Finally a fun youth oriented, female centric film where the issues are relevant and rib-tickling for anyone who has been through match making.

The brilliant soundtrack from Amit Trivedi will set your feet tapping instantaneously.

Abhay Deol is a charmer throughout the movie and churns out another impeccable performance.

Sonam Kapoor plays the role of a rich spoilt brat to the T – minus her nasal tone which proves to be quite distracting when it comes to the dialogue delivery.

Funny man Cyrus Sahukar will manage to tickling your funny bone as always, as rich mithai scion’s bhaiyya type son, while Lisa Haydon and Arunodoy Singh provide the eye candy. The real surprises are Ira Dubey and Amrita Puri who give power packed performance as the bindaas city babe and the behenji trying to turn mod.

The downside of Aisha:

Unfortunately, the film was not substance oriented and hence relied on clever dialogue, performance and styling. The Austen storyline remains untampered with but the original depth is missing. Although the love story was simple the characters in the book were complex. However, director Rajashri Ojha’s characters seem superfluous and overly obsessed with L’Oreal, Chanel and Ferragammo. The story takes a bit of a backseat. The pace of the film is slow as well (perhaps a result of all the high heeled stilettos?)

Anyone who did go to see the movie  obviously went to see it for the outfits,  styling and latest fashionista in tinsel town Sonam Kapoor. So for those expecting a dose of glamour and glitterati wont be let down, but those expecting a brilliant film full of soul and life should give this one a miss. That is unless you are dying to know if marriages made in heaven or whether they be stage managed and if Arjun’s opinion really matters? And most of all can Aisha succeed as a matchmaker?