India and Pakistan, please stop before it is too late … 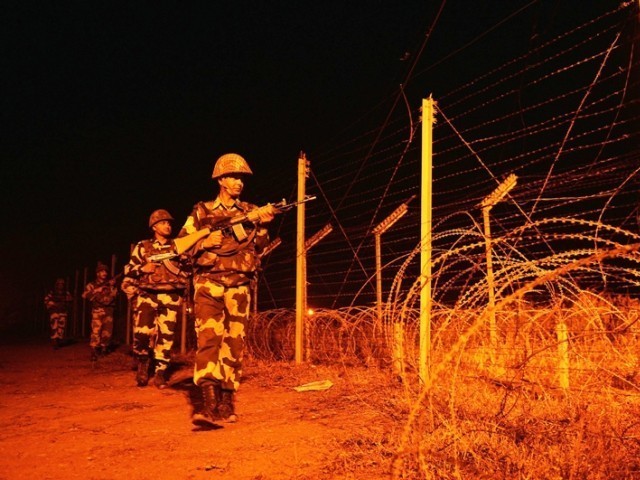 It is a confrontation triggered by Indian violations and Pakistan's reactions. So both sides are playing some role. PHOTO: AFP

With the pressure being built up in India about the Line of Control situation, it has brought to the fore the question of how we Pakistanis respond to it.

Do we aggressively answer back in the press and other media?

Is it better to continue to quietly urge a resolution through discussions?

Or is it an option to just ignore the furor and let everything settle?

The stakes are extremely high, simply because this is a nuclear region and any error can lead to huge unintended consequences. Just to paint a scenario in the future of such a cataclysmic error…

Imagine a few months from now a Pakistani and an Indian are sitting together in the Bay area, around Silicon Valley in US. They are in their early 40s, have seven figure salaries, lovely children and great houses. They are avidly involved in their social lives and have great friends. From the outside you would be envious of their lives, but, the truth is that they are distraught and bereft of hope.

How could they do it, they keep asking each other?

How could they destroy our homelands?

But unfortunately, that is what has happened.

In a nuclear conflagration triggered by frenzy about LoC violations, everything from Balochistan to Assam (including Bangladesh) is now suffering from nuclear fallout. The region will be dangerous for decades due to radiation. No access, relatives and friends dead or missing, starvation prevalent and the world economy is itself , in recession – after all almost one in five people lived in this region.

Well ask someone in October 1962, around the time of the Cuban crisis or those who remember the last face-off in 2001 between Pakistan and India. I vividly remember a drive along the border for almost a 100km to Narowal, when everything had been evacuated. A desolate drive never to be repeated in a lifetime, I hope.

But the lesson is, it can happen and brinkmanship is hardly the required behaviour.

So, to the present line of control situation!

“Beheading a soldier is inexcusable. However, knowing the Pakistan Army, I can say for sure it is not in our culture to do something like that. It’s a court martial offence,” said Musharraf. “The politicians and media in India are being hysterical about it,” he added.

I am not an expert to comment on his assertions, but the report by The Hindu on the LoC – which has investigated the actual story – rationalises the events. According to that investigation, it is a confrontation triggered by Indian violations and Pakistan’s reactions. Thus, both sides have played a role leading to this fight.

It is time to sit down and talk it over. We don’t want two countries with nuclear arms to go to war. Both sides can preserve their self-respect and yet have a rational discussion.

Simla in our collective history is a great example of even handed negotiations. However, I guess I live in an ideal world.

What we have going on today, is a barrage from the media in India. Maybe commerce is playing a role and ratings are the reason for this furor – whatever it is, this then drives and motivates politicians. You get hunger strikes and the extreme point of view takes over. One politician gets up in the Parliament and demands 10 heads to be sent back in compensation.

Is this  for real?

Are you really asking for murder to be sanctioned now?

And then the Pakistan media will want 10 heads back!

We could play tit for tat for the rest of the year.  So much for Aman ki Asha!

Oh, for some responsible people who will show maturity!

So why is better sense not prevailing? Maybe it is filters of a thousand years of history and the partition; regardless, sense should prevail because both parties don’t have options left.

Till now, Pakistanis have been cooler in their reactions. The media here has also not taken as much notice, perhaps because Tahirul Qadri, the Supreme Court and rental power case have taken prime importance. This quiet handling should continue and more discussions should occur sooner than later.

The LoC mechanism to sort skirmishes has already been activated. If that does not work, then the Foreign Secretaries or even Foreign Ministers should meet.

More headlines, alarmist columns or beating the drum is not the answer.

Exhibiting maturity and dignity is.