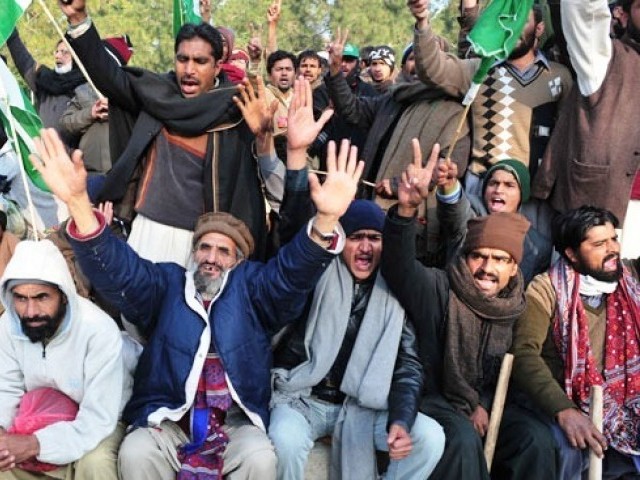 My heart bleeds when I think of how my fellowmen have been disappointed yet again, and the real tragedy is that they don’t even know it. PHOTO: AFP

Qadri is no hero, though in the manner that he swept in and out with thousands on his side, one wonders where he hides his red cape.

One also wonders about the source of that unswerving confidence.

Anyone would agree that his arrival was anti-climactic – where was he when the nation was crippled without electricity and gas, when food became entirely unaffordable and when democracy was beginning to feel like the wrong choice?

What has prompted his untimely bulletproof ‘revolution’ now, just two months ahead of elections? Surely, he could have stepped in when the election commission was being formed, and somehow made sure that he had the chance to actually contest, provided he gave up his Canadian citizenship.

Swelling support seen for Qadri showed us that the lower and middle class are emotionally charged and extremely disappointed in the government’s performance over the past five years.

Having spent a large amount of time among the crowd, I felt genuinely grateful that a significant percentage of the masses had finally taken to the streets – the stage was set for the most powerful revolution, though how can one bring a revolution without any tangible demands?

Hats off to the crowd for their resilience and endurance, that allowed for a surprisingly peaceful four days, and to Qadri for being adored to the point of ‘godliness’ − high up in his protected vessel.

Not a single supporter present questioned the timidity of a revolution from behind bulletproof glass or his hypocritical words, “be lions, not mice”, as he exhibited nothing but mouse-likeness.

Four days later, Qadri lovingly embraced all those he spoke so strongly against and returned to nothing but a piece of paper and a first-class ticket back to Canada.

My heart bleeds when I think of how my fellowmen have been disappointed yet again, and the real tragedy is that they don’t even know it.

I salute the mastermind behind this action film that left 180 million people flabbergasted.