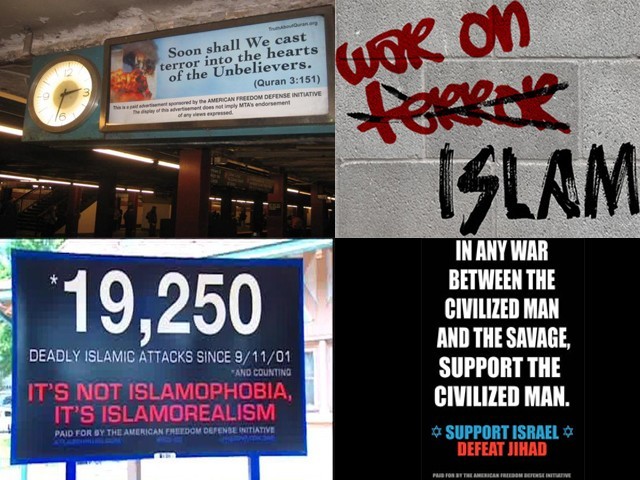 Offensive ads have been showing on New York City buses and in subway station.

“In any war between the civilised man and the savage, support the civilized man.”

Beneath that, in blue, were two Stars of David, and the words,

Below that, in red text, it read,

Surely, this is politically incorrect in a world where human rights discourse has more or less permeated consciousness.  If teachers in colleges made such statements, many would boycott their classes – if employees at the office water cooler called Muslims savages, it’d be the subject of a workplace controversy.

Why was the ad not been banned as hate speech?  Shouldn’t the Metropolitan Transportation Authority (MTA) be protecting its passengers from harassment?

Muslims have been the subject of institutional racism since 9-11 – profiling, discriminatory laws, and violence both in the US and abroad.  Some profess that the MTA itself is racist.  SWAT teams regularly patrol the subway and conduct racist spot checks. Perhaps, it was only a matter of time that words like “savage” depicting the “other” as primitive, fierce, ferocious, and barbaric – and who must be conquered and civilized would be eventually normalised.

Never mind that such reference is reminiscent of a discredited colonial imagination.

According to US District Judge, Paul Engelmayer, prohibiting such ads would violate the First Amendment right to free speech.  Only very limited forms of speech –incitement, defamation, and “fighting words” are forbidden under American law – and the ad was not amongst these categories. Furthermore, to prove the point, the ad’s proponents, the American Freedom Defense Initiative (AFDI), a right winged pro-Israel advocacy group, led by Pamela Geller, rushed to court.

Engelmayer’s reasoning is internally logical and reflects a studious adherence to precedent and an unflinching commitment to a constitutional principle – albeit in a political vacuum and is thus willfully blind to socio-economic imbalances.

And this is where free speech law fails us.

Free speech doctrines are not concerned with Israeli crimes against the Palestinians; the economic apartheid, the systematic use of sophisticated weapons, the ethnic cleansing, the expulsions, and occupation. Free speech law sees the world as black and white and flat. It purports to be a neutral witness to the ravages of history. All speech is equal and equally sacred – whether or not it is biased against a community that has suffered historical oppression at the hands of the one the speech maker sympathises with.

This – according to absolute free speech proponents – is the only possible way to protect it. MTA’s intentions may be “benign and noble” in seeking to derail the ad, but are no cure for a First Amendment violation. The doctrines must protect the “free flow of ideas and opinions” – regardless of whether some speech has the backing of tanks, billions of dollars, and a heavy duty Washington lobby, is disfavoured or unpopular or, as in the case of these ads, someone doled out  $25,000 to make it.

The AFDI claimed the ad was in response to one by WESPAC Foundation that said:

“Be on our side. We are the side of peace and justice. End U.S. military aid to Israel.”

In contrast the AFDI’s views are plainly racist. They reference a website on the ad which has articles and one of which states:

Islamic societies are among the least developed cultures, the product of nomadic civilization. Their culture is primitive and barbaric, and they hate Israel because it is the sole beacon of modern science and civilization and technology in the Middle East.

In this context, the court had no problem finding the ad demeaning to Muslims. It also found that it violated the MTA’s standard proscribing speech that demeans a person or group on account of,

What they found instead was that MTA’s “no demeaning standard” was content based and thus unlawful.

Content based restrictions in “designated public forums” such as on buses and in subway stations (and unlike jails, military bases and airports) are subject to,

“Strict scrutiny and must be narrowly tailored to serve a compelling government interest.”

The MTA standard was unlawful as it protected certain groups, but not others.  The court contended that ads that demean based on

Holding that the MTA can’t pick and choose what to broadcast, the court cited a list of potentially demeaning statements that would be permissible under MTA rules:

“Southerners are bigots”; “Upper West Siders are elitist snobs”; “Fat people are slobs”; “Blondes are bimbos”; “Lawyers are sleazebags”; or “The store clerks at Gristedes are rude and lazy.” “Democrats are communists”; “Republicans are heartless”; or “Tea Party adherents are barbaric.”  “John Doe is a child-abuser”; “Jane Doe runs a Ponzi scheme”; or “My neighbors, the Does, are horrible parents.”

But let’s get real.

Most of the above statements are a bit spiteful but are not directed against historically oppressed groups. The “no demeaning standards” conforms to human rights principles in recognising the discrimination suffered by certain communities – Blacks, Latinos, Asians, Africans, immigrants, Catholics, Muslims, Jews, Sikhs, Hindus other religious minorities, disabled, gays and lesbians, women, youth, elderly people, people who face multiple such oppressions. Thus it’s not so bad when you poke fun at an overweight male Protestant Caucasian investment banker – but it becomes disturbing when you direct aspersions at a Mexican migrant labourer or a Black welfare mother to promote an idea or a product.

Although economic status is not explicitly mentioned in MTA’s nine enumerated categories (a missing element in US civil and human rights law) in Pakistan it would be callous to have railways porters or female cotton pickers represented in ads for clothing for the rich, but an ad poking fun at an upper class woman sporting $1,000 shoes seems inoffensive. Speech becomes unacceptable, even hostile, according to its social, economic, and political context.

What then is the solution?

It’s desirable to want some political context to free speech – but then it wouldn’t be free anymore and who knows with the slippery slope argument. In contrast in Pakistan, we place heavy impositions on free speech – Article 19 grants it and subjects it to any:

“Reasonable restrictions imposed by law in the interest of the glory of Islam or the integrity, security or defence of Pakistan or any part thereof, friendly relations with foreign States, public order, decency or morality, or in relation to contempt of court, commission of or incitement to an offence.”

Perhaps the best revenge is justice in the people’s court. Within days, activists had defaced almost all of the AFDI’s ads – expressing, ironically, their own freedom of expression which came at the cost of a spray paint can and a possible charge of disorderly conduct.