The Afghan army and its failure 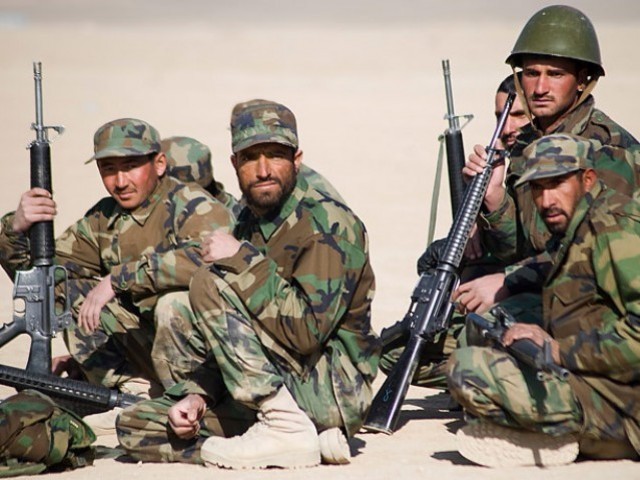 President Obama has made it clear that these troops will not be seeking permanent settlement in the country. PHOTO: REUTERS

US President Barack Obama with his Afghan counterpart Hamid Karzai has announced that the Afghan army will now operate directly from Afghanistan from this spring.

While Karzai has expressed happiness over the announcement, he was heard saying that an indigenous army would mean that Afghanistan will not be able to put the blame on foreign troops in case of human rights violations in its own country.

However, a very small number of US troops may remain in the region for assistance and training purposes. President Obama has made it clear that these troops will not be seeking permanent settlement in the country.

In an interview, NATO Commander David Brenow has said that 352,000 troops will comprise the Afghan national army to combat 30,000 Taliban fighters. He also said that the number of NATO and US forces may be between three and five thousand.

Now, as the US and NATO forces are leaving Afghanistan in 2014, and Afghan forces are ready to start operation, the Afghan president has also demanded to strengthen the Afghan air force to combat any insurgency.

However, it seems that an autonomous army is not the solution. The main question is that if Taliban use guerilla fighting against the newly constituted Afghan army, will the Afghan army be able to put up a defence?

A defence against the kind of warfare which earlier, more accomplished armies were not able to contain?

Another important concern is the corruption which has spread in Afghan society. Afghan warlords are more loyal to personal interests than to the national interest. Most Afghan analysts are of the opinion that this local army will obey warlords, and cater to their interests, instead of striving for collective security.

Hope will remain lost till this situation prevails, till the various warlords don’t unite, and consider Afghan security as their own security.