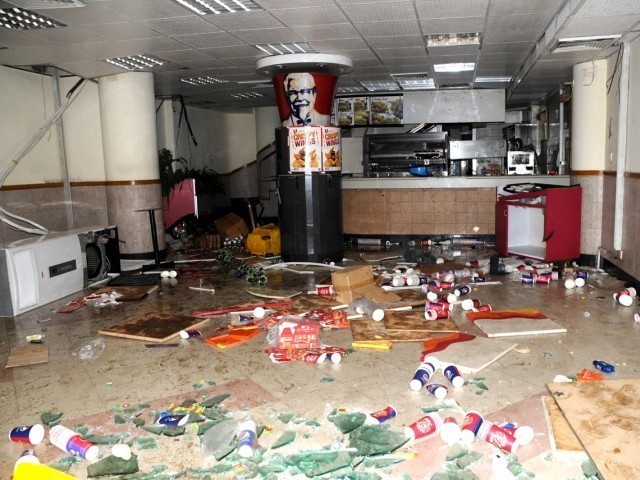 KFC stores in Karachi have been attacked five times in the 15 years the franchise has operated in Pakistan. PHOTO: FILE

The mobile phone slipped from his hands.

Eight years had passed since Jahangir had visited a newly opened foreign fast food chain in the upscale urban badlands of Karachi.

Since then, much had changed in the dark metropolis, but as he lay shaking on his bed, Jahangir could still smell French fries gone soggy…with blood.

He could still see in his mind’s eye, a jostling dark mass of screaming, orc-like beings with beards as long as their blades, smashing up what once used to be a KFC outlet.

A KFC outlet he had once worked at…

“Fatburger has come to town…” he murmured to the thick, empty terror-laden air, as he ran his psychiatrist’s call through his head again and again.

Could he? Would he? Was eight years enough time to heal the wounds that Jahangir could still feel all over his body and mind? The scar on his left leg was a constant reminder of what a crazed Islamist militant with a chicken bone could do to an unsuspecting fast food employee in the middle of a riot.

The scars in his mind, however, were much worse. He still remembered the screams of his colleagues, as they were burnt alive by the mob. He still remembered hiding without moving for hours on end, waiting for the terrifying scrapping sounds in the refrigeration unit to die down, only to find out…his remaining companions were hiding, and slowly freezing to death inside.

“Drones” he whispered softly, his eyes lighting up.

Having lived through the trauma of working in Pakistan’s fast food industry, Jahangir let out a low moan; a guttural, throaty expression of pure understanding and empathy. The article was excellent. In its nuanced, subtle and loving attention to terrorism, drone attacks and Pak-US ties in the midst of Fastburger’s launch THIS, Jahangir realised, was his own story; the narrative of serving food in a country torn apart by war and violence.

Tears streamed down Jahangir’s face as he read the following lines:

Pakistanis increasingly flock to American food outlets even as ties between the two nations are strained by U.S. drone missile strikes in the northwest of the country.

“They do…” he sobbed, remembering his love of handing over extra packets of ketchup to loving, outstretched arms – the very arms that later grabbed him and stabbed him with a chicken bone.

“In food, people don’t look at relations between countries. They just want to eat.”

“LIES! LIEEEESSSSSS” he shrieked, only calming once he read:

Taliban insurgencies along the border with Afghanistan, nationwide bombings and political unrest have plagued Pakistan’s economy, limiting growth to an average of three percent a year.

And then there, right in the middle of the story of Fatburger’s launch was Jahangir’s moment of catharsis:

KFC stores in Karachi have been attacked five times in the 15 years the franchise has operated in Pakistan. In September, when Pakistanis protesting an anti-Islam film made in the U.S. poured onto the streets, mobs attacked banks, movie theatres and damaged a KFC store in Karachi.

Jahangir stands in front of Fatburger.

Clenched in his hands is a crumpled, tear-stained print out of the article: Pakistan Loving Fatburger as Fast Food Boom Ignores Drones.

After eight years, one chicken bone injury, the loss of his job, much of his sanity and love for fast food made by foreign companies – Jahangir steps into Fatburger and orders himself the biggest meal on the menu.

He eats in silence, alone.

He eats with memories of terror, loss and Kentucky Fried Chicken.

Every time he feels the memories overwhelm him, he touches the paper upon which is printed the words that brought him solace; the article that tells him he is not alone in this mad world; a report that truly captures how dangerous the fast food business really is in Pakistan.

He thanks the reporter and the editor between mouthfuls of burger and fries:

“Thank you. Thank you for saving my life. All I wanted was for someone to understand how I feel. And now, someone finally does.”