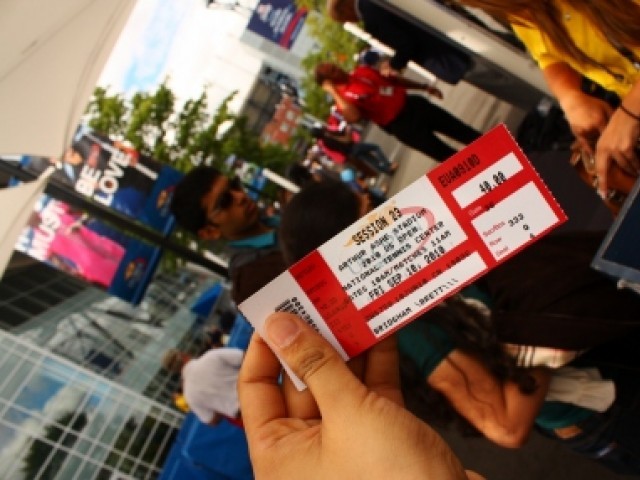 A ticket to the game

Watching Pakistan’s Aisamul-Haq Qureshi almost win the Men’s Doubles Final at the US Open in New York was not a bad way to spend Eid.

Throw in a velvety lump of gulab jaman gratis the Bengali uncle at Spice Corner, beaming from behind the counter in an embroidered black kurta; some papery pista-encrusted bakhlava from the toothless Palestinian landlady, her troop of grandchildren hurtling through the building in a jumble of satin and plastic wands; and a cup of spongy ras malai from Curry in a Hurry, served by a waiter in a Jinnah cap with a retro Shahrukh Khan-Madhuri Dixit video playing on the TV – I’d say Eid was downright unforgettable.

We hadn’t planned on it. I was expecting it to be a pretty ordinary Friday, minus the 100-odd phonecalls to the 100-odd friends and family scattered across North America, an attempt at cooking sheer khorma wearing gold bangles and a chiffon shalwar kameez that still smelt of neem leaves from my jahez trunk,  followed by dinner at the Lebanese place down the street when my husband came home from work, and a two-person Eid jamaat in the living room, infused with jasmine incense for added effect.

But all that changed when Aisam Qureshi and his Indian partner Rohan Bopanna – nicknamed the Indo-Pak Express – zoomed into the US Open Men’s Doubles Final on Wednesday, September 8th, making history as the first Pakistani to reach a Grand Slam Final, in the first major tournament that an Indian and Pakistani – sworn enemies from birth, some would have us believe – were playing on the same team.

I’m not a huge tennis fan, but when I read the news that night on my laptop, sitting in the blissful calm of our  TV-less apartment, I made up my mind: “We have to go”. There were no two ways about it. We had to go support Aisam, even if we didn’t understand why the deuce the commentator kept saying “Laav” every two minutes.

24 hours, a Craigslist hunt, and a hotel lobby rendezvous later, we had four Friday tickets to Arthur Ashe Stadium in our hands and a breathless mixture of hope and disbelief in our hearts – what if they won?  They had made it this far. Could it  be? Could this historic India-Pakistan duo beat the Bryan Brothers, identical twins playing tennis together from the age of 2, with 65 Double’s Titles titles to their name ? Could Aisam be the hero and ambassador that Pakistan so desperately needed, in this her darkest of hours, on this blessed Eid day?

1:30pm – Half way through the second set, 4-4. We had gradually inched to the edge of our seats. Anything could happen now. I was trying to control the urge to holler a “Buck up Aisam buck uppppppp!”, an almost genetic reflex after a lifetime of cricket-watching – which, it turns out, is a very different experience from tennis-watching – but every so often a screeching ”Aisam!” would escape from our girly green corner, much to the horror of the surrounding goras.

We didn’t care. It was bad enough we had to forego the face-paint and gigantic flag in our hurry to catch the 7 o’clock train.  Tennis needed some good old desi jazba.

I still wonder, if we had cheered a little louder, prayed a little stronger, would an invisible force have lifted up Aisam’s arm for that winning stroke?

But though the Indo-Pak Express didn’t win the title, Aisam was still the hero. He was the hero in that 23,000-seat stadium, packed with Americans, a pocket of Indians and just a handful of Pakistanis, with his youthful smile, passionate smashes,  an endearing hint of nervousness, and the heartfelt speech at the awards ceremony that brought everybody to their feet.

He was our Lahori boy who started  playing tennis with his mother when he was 14 because it beat staying indoors doing homework.

He was a real guy. And he proved that with talent and hard work, you could get anywhere. More importantly, he showed to all Americans watching the game that day why Pakistan deserved respect – respect,  and right now, more than ever, assistance. The Bryan Brothers have donated $5,000 to the Qureshi family’s relief fund for flood victims, and with Aisam in the limelight, one hopes that other atheletes follow their example.

Thanking the Bryans for their donation, shouting out an Eid Mubarak to the crowd and happy birthday to his sister back home, and expressing to America a simple message “We want peace just as much as you do.”  Aisam brought out the best of Pakistan.

What is Eid about? Contrary to my childhood convictions, it’s not about eidi; it’s not about  new clothes or food either. It’s not even about giving or sharing, though that comes pretty close.
I’ve realized that Eid is about family. It’s about the triple hugs, the smell of roses and frankincense, and the crisp whiteness of everything, from your dad’s kurta to the new tablecloth to the grin on the face of  the cook’s 6-year old son and the milky sweetness of your mother’s superb sheer khorma.

It’s about piling up in the car for the annual visits to your endless roster of relatives, from Anarkali to Multan Road to the Gulberg III cemetery; the date brownies at your phuppo’s and the anday ka halwa at your khala’s, playing Taboo or Monopoly with your cousins till midnight or watching Michael Jackson videos on your chacha’s new TV system while the grown-ups laughed boomingly away in the drawing room, because no matter what you would always be eight years old in their eyes, and that was a great feeling.

I wasn’t with my parents this Eid, nor my cousins or khalas and khaloos, chachas and phuppos. Eid dinner consisted of my husband and I with a remotely-related United Nations-veteran New Yorker-aunt and a third cousin whom I had never met in my life, at a Chinese-Indian fusion restaurant on Lexington and 28th.   Stir-fried bhindi and gobi manchurian.

But I was with family. It was Eid, I was a proud of Pakistan, and Aisamul-Haq Qureshi had waved at me. It was a good, good day.