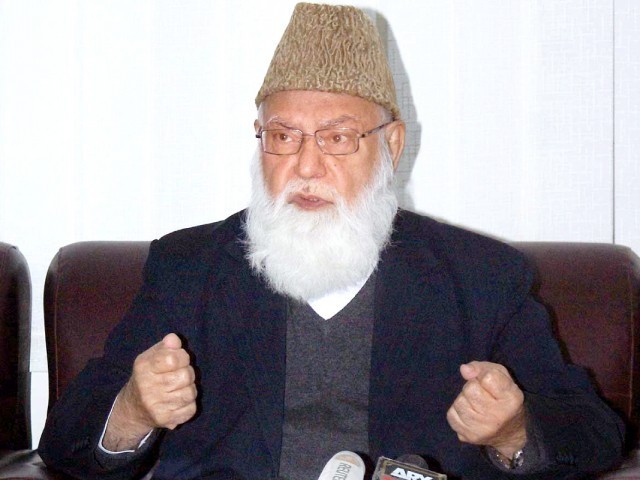 I remember that emotive slogan, and the zeal which surrounded Qazi sahib’s leadership. PHOTO: FILE

The sudden demise of two towering personalities, Professor Ghafoor Ahmed and Qazi Hussain Ahmad, are irreparable losses for the Jamaat-e-Islami (JI.) Both figures served on key slots in the party. I pray that the departed souls are bestowed with eternal peace and their followers and families are given enough courage to bear their demise.

When I was a college student, I often heard the slogan ‘zalamo Qazi aa raha hai’ (O wicked people, Qazi is coming). It was the early 1990s and Qazi Hussain Ahmad was the Ameer of JI.

The suburbs of my city were plagued by an alleged smuggler, who was a member of the Punjab Assembly named Muhammad Akram alias Bella Butt. This lawmaker was notorious for grabbing lands, setting homes on fire and dislocating families forcefully to settle personal enmities.

As the general elections were around the corner, the residents of the area searched desperately for someone who could counter Butt’s brutality. Some of them also related their grievances to Qazi sahib.

In order to address Butt’s atrocities, Qazi sahab decided to march towards the area where he was based – the Basin village bordering Wagah. Some JI workers gathered in the area a night before the scheduled date. Foreseeing a tumultuous encounter, law enforcement agencies deployed heavy contingents.

On the other hand, Butt gathered hundreds of outlaws and criminals with ammunition in his sanctuary to retaliate and combat with the JI and its supporters.

Heavy aerial firing and tear-gas shelling was undertaken by the law enforcing agencies to disperse workers and prevent Qazi sahib from reaching the destination. He and his caravan were halted outside the village by the police.

They departed only after the force provided the assurance of justice for aggrieved families of the area. A big threat of massacre was staved off after an agreement signed between stakeholders.

Since then, I remember that emotive slogan, and the zeal which surrounded Qazi sahib’s leadership.