Pressing questions: Should Misbah call it a day? 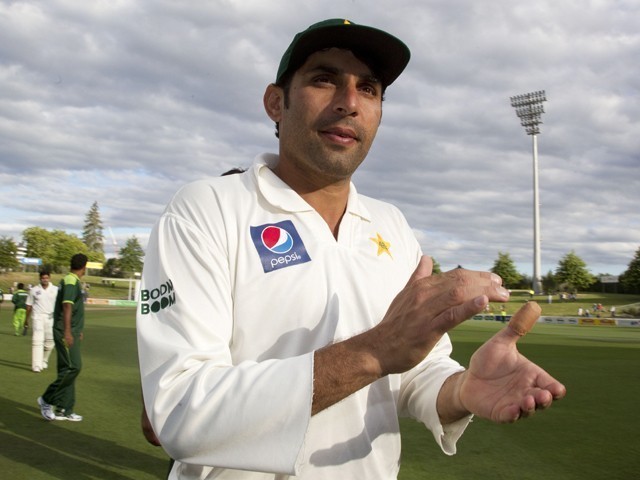 Misbah has done a lot for the team, but he is just not suited for the ODI format. PHOTO: REUTERS

A series victory typically covers a team’s weaknesses as the focus then revolves around how the series was won, which players performed exceptionally, and then generally how good the leadership and management was.

However, such is not the case in Pakistan’s 2-1 series victory over India.

It is a great feat no doubt! Beating India in India and almost clean sweeping them is an achievement and a half; however the Pakistan Cricket Board (PCB) should not shy away from assessing the overall team performance during the series and fixing the ODI team.

Pakistan’s Test and T20 teams are quite brilliant in my view. The Test team has a stable batting line up where all the batsmen have scored heavily over the past two seasons and the bowling remains a threat with the world’s best spinners.

The T20 team has a settled feel under the leadership of Hafeez. It has explosive batsmen as well as accumulators, and the bowling is potent with the likes of Ajmal, Gul, and Afridi – the leading T20 bowlers in the world.

The ODI team however, requires some tweaks.

The series win over India was largely due to the brilliance of Junaid Khan, the efficiency of the overall bowling attack, the markedly improved fielding, and Nasir Jamshed’s superb form with the bat. Besides him, only Mohammad Hafeez and Younis Khan displayed some semblance of form with the bat; no other batsmen looked in touch.

The ODI team’s middle order, Misbah’s position in the team, the vacant all-rounder slot(s), and the wicket keeper are key issues that need to be addressed by the PCB.

1. The middle order requires more fire power! Misbah has got to go!

A middle order comprising of Azhar Ali, Younis Khan, Misbahul Haq, and Shoaib Malik looks quite ugly on paper. On the field, it looks even uglier.

That is not the middle order of an ODI outfit. For a Test team, it looks great; but not for ODIs. You absolutely cannot have Azhar, Younis, and Misbah playing for the same XI. If the three of them bat 50 overs, they would collectively put on 100 runs.

Failing to capitalise on an opening stand of 140 odd in 23 overs and folding in a chase of 167 clearly demonstrates the inability of Pakistan’s current middle order to push for runs in ODIs.

One cannot expect an Azhar or a Younis or a Misbah to maintain the sort of momentum that was required to build on the platform provided by Hafeez and Jamshed in the second ODI. Nor can one expect constant rotation of the strike or a push for singles to apply pressure on the fielders when any of the two are at the crease together.

One of the biggest reasons for Pakistan’s failure to chase 167 in the third ODI was Misbah’s ‘swashbuckling’ innings of 39 off 82 deliveries. His approach was simply to block, block, block, and eventually he sucked the blood out of Pakistan’s chase -which should have been a cakewalk.

Misbah has failed time and again. His supporters argue that besides him, no one in the team has the ability to stay at the crease, and that without Misbah, Pakistan would not be able to play 50 overs.

Misbah occupies the crease, and blocks 75% of the deliveries he faces. He scores at a strike rate of 40, and loses his wicket after being around for over an hour when he should have initially seen the ball as clearly as a football!

For Pakistan’s sake, for our sake, and for his own sake, please someone sack him from the ODI team!

Misbah has done immensely well as a leader of the team and his contribution as a captain will always be remembered, but more so in test matches than ODIs.

His supporters say that Misbah was responsible for taking Pakistan out of the rut following the spot fixing scandal. But, they forget that Misbah only took over the Test team. The ODI team was still under Shahid Afridi, who played as a big a role if not bigger, than Misbah did in the aftermath of the spot fixing saga.

It was Afridi who led Pakistan to the semi final of the World T20 and the World Cup. It was Afridi under whom we managed to end 2011 as the leading ODI team of the year in terms of W/L ratio.

If it wasn’t for a spat with the coach and the then PCB chairman, Misbah would probably never have replaced Afridi as captain of the ODI team.

If Afridi can be sacked while leading the team to the World Cup semi-final and a series win over the West Indies, so can Misbah (despite the series win over India,) where he hardly played any role at all.

In Azhar Ali, Umar Akmal, Asad Shafiq, Shoaib Malik, and the untested Haris Sohail, Pakistan has a capable pool of middle order batsmen who can become the core batting line up in ODIs for Pakistan.

It is highly unlikely that Younis Khan (nor Misbah) will be around in two year’s time for the World Cup in 2015. It is time that the PCB asked Misbah and Younis to move on from ODIs and the team management started working on the above mentioned (five) batsmen by giving them ample of experience over the next of couple years leading to the World Cup.

Mohammad Hafeez has shown that he is ready to take over the captaincy of the ODI team. With him and Nasir Jamshed, Pakistan finally have a well settled opening combination!

It is time that more attention is paid to the middle order.

With Shahid Afridi’s and Abdul Razzaq’s ODI careers coming to an end, the selectors need to search for a capable replacement or two.

No, Shoaib Malik is not the answer.

A large factor driving the success of Pakistan’s ODI team in the 90s was the presence of brilliant all-rounders in the mould of Wasim Akram, Abdul Razzaq, Azhar Mahmood, and Shahid Afridi.

They were all attacking cricketers – primary bowlers and hard hitting late order batsmen.

Pakistan is sorely missing similar cricketers in its ODI line up.

Asad Ali and Anwar Ali, both of whom were part of the squad that travelled to India, have similar reputations in domestic cricket; however they remain untested in the international arena. Neither got the chance to display their talent though.

Hammad Azam is another player who has a glowing domestic reputation for being a finisher. His batting is explosive and his steady medium pace can be more than handy in the middle overs of an ODI.

Hammad did no wrong, yet he was dropped from the team without getting enough chances to display his potential.

The PCB and the team management need to blood these youngsters soon and provide them with more exposure to international cricket. At the same time, they need to continue looking for all-rounders who can potentially replace Afridi and Razzaq in the long term.

3. Where are the good keeper batsmen?

The wicket keeper’s position has troubled Pakistan for a long time now.

Kamran Akmal was quite efficient behind the stumps in the series against India. But the reason he is the first choice keeper is because he is a very good batsman.

Yet, he has been a miserable failure in T20s and ODIs since his return to the team.

He failed continuously during the World T20, and he hardly scored a run in the T20s and ODIs against India.

The PCB selectors really need to work hard to find a good keeper batsman for Pakistan.

I hope that the series win over India does not mask these issues with the team and that the PCB takes some notice and fix them in time. The success of Pakistan’s Test and T20 teams has been based on specialist players who have fulfilled their roles really well.

It is high time that the same kind of attention is paid to the ODI team and specialists are included in the squad.