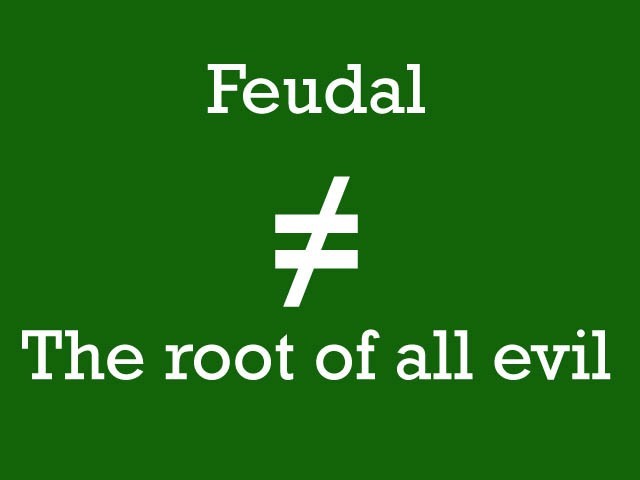 Lately, feudalism has emerged as a rallying cry in Pakistan to assert a need of a revolution instead of an evolutionary democratic process that supposedly guards vested interests of corrupt feudal elite.

Renowned Pakistan musician Salman Ahmad wrote a piece published in The Express Tribune on December 31, 2012. I have tried in the following paragraphs to rebut his argument by pointing out factual inaccuracies in the piece.

Mr Ahmad begins with castigating the ‘feudal elite’ of the country while citing the instance of the chilling murder of Shahzeb Khan, gunned down in Karachi by the ‘sons of corrupt feudal elite that Bilawal represents’.

Aside from inherent flaws of inductive reasoning employed by Mr Ahmad, feudalism has come to be a whipping boy when it comes to a simplistic explanation of multifaceted problems faced by the country – a scapegoat to absolve ourselves of necessary introspection.

Lately, feudalism has emerged as a rallying cry in Pakistan to assert a need for a revolution instead of an evolutionary democratic process that supposedly guards vested interests of a corrupt feudal elite.

The term feudalism can be contextualised in two different but intertwined expressions.

One expression deals with the structural issues of feudalism, that is, feudalism as a mode of production, while the other addresses normative/societal aspects of feudalism.

There is an utmost need to take into account two different expressions of feudalism ahead of tarring the things with large brush strokes.

As Mr Ahmad has spoken highly of ‘revolution’, ‘class warfare’ and ‘struggle for the rights of the downtrodden’, it surely warrants inviting Karl Marx into the debate. In a classic Marxist definition, feudalism is “the economic situation coming before the inevitable rise of capitalism”.

One doesn’t need to be rocket scientist to conclude that feudalism is not the defining parameter of the political economy of Pakistan.

Data shows that by 1999, 88% of cultivated land in Pakistan was in farm sizes below 12.5 acres,while just over half the total farms in 1999 were less than five acres in size. These statistics would hardly emerge from a feudal economy.

The dominant share of Pakistani exports comprises agricultural products just as the different agri-economies of the world, which precisely has nothing to do with the feudalist mode of production.

Coming to the latter normative/societal expression of feudalism, which is largely used as a pretext to malign politicians, it connotes authoritarian and above-the-law attitudes.

A careful study of prevalent societal norms in Pakistan shows that this authoritarian and above-the-law attitude has become a hallmark of many different institutions of our society.

While we have seen many from the ‘corrupt feudal elite’ at the gallows, sentenced in courts and held in solitary confinements in jails; when was the last time an army general was tried in courts?

When was the last time, if one may ask, that a ‘corrupt feudal elite’ brought an entire city to a standstill as we have seen done many times in Karachi?

When was the last time a single one of the terrorists of banned outfits, who are wreaking havoc all over the country and killing people at will, was hanged on charges of treason and mass murder?

If feudalism implies ‘immune to the law’, then the emerging ‘feudal elite’ in Pakistan is not the rural feudals of Punjab, Balochistan and Sindh, but the power brokers, including both state and non-state actors, who form the bulk of the power structure in Pakistan.

Again to recall Karl Marx, they are “cultural vestiges of a dying system”, while feudalism as a mode of production is gone long ago.

Mr Ahmad goes to great lengths to discredit the current PPP-led government by terming it as ‘the rule of the gangster’. He falsely claims that it was President Zardari who appointed ‘his son as chairman of the PPP for life’ – while the fact of the matter is that Bilawal was appointed as chairman not by his father but the Central Executive Committee (CEC) of the PPP in Naudero after Benazir Bhutto’s death.

BB appointed her husband to look after the party affairs in order to avert a split in the party in case of any untoward situation.

‘Dynastic politics’ is another stereotype stood on preconceived notions in lieu of historical facts. Since Mr Ahmad has cited the example of the Bhuttos to lay down his standpoint, I will try to dissect the phenomenon in context of the Bhuttos.

After the hanging of the PPP chairman ZA Bhutto by the Zia regime, it was his wife Nusrat Bhutto and then his daughter Benazir Bhutto who led the resistance movement against the Zia dictatorship.

Keeping in view an extensively patriarchal society, his sons Mir Murtaza Bhutto and Shahnawaz Bhutto should have taken over the party, if it were about dynasty at all. But this was Benazir Bhutto who chose an uphill path of organising a democratic front, the Movement for the Restoration of Democracy (MRD), against the Zia dictatorship instead of taking up arms, like Mir Murtaza who formed the Al-Zulfiqar Organisation (AZO) to avenge the death of his father.

She made her place in the labyrinthine political arena of Pakistan by hanging in there in the face of gigantic hurdles. She was there fighting the horrors of dictatorship when others opted to sit back and watch. For this very reason, in the 1997 elections, Ghinwa Bhutto, the PPP (Shaheed Bhutto) chief and widow of Mir Murtaza, lost by a huge margin to Nisar Khuhro, a stalwart of the PPP in Larkana.

That contest was largely one-sided even though people were then emotionally charged in the wake of Mir Murtaza Bhutto’s recent assassination. A widow of a Bhutto should have won in her home constituency if it were all about Bhuttos and dynastic politics.

Coming from someone who is currently a US resident who passionately exalts Mr Jinnah, it sounds paradoxical to say the least to mock the ‘gora accent’ of Bilawal Bhutto. Instead of objectively discussing the message delivered through the speech, Mr Ahmad resorts to personal attacks to malign the entrant. As for Faiz sahib, it takes little effort to find out the relationship between Faiz and ‘feudal’ Bhutto who not only paved the way for commutation of Faiz’s sentence in 1960 but also appointed him as advisor on cultural affairs at the ministry of education when in power.

Faiz was a people’s poet and knew very well how to respect people’s decisions.

It’s high time to let the people decide what they deem best for themselves and respect their decision. Random Plato quotes are good, but not good enough to conceal intellectual dishonesty and personal dispositions.

We live in different epoch when we don’t need the ‘philosopher kings’ of Plato or technocrats for that matter.

All we need is to respect the people’s voice.