Tahirul Qadri, the Bhutto boy, and the establishment’s last play 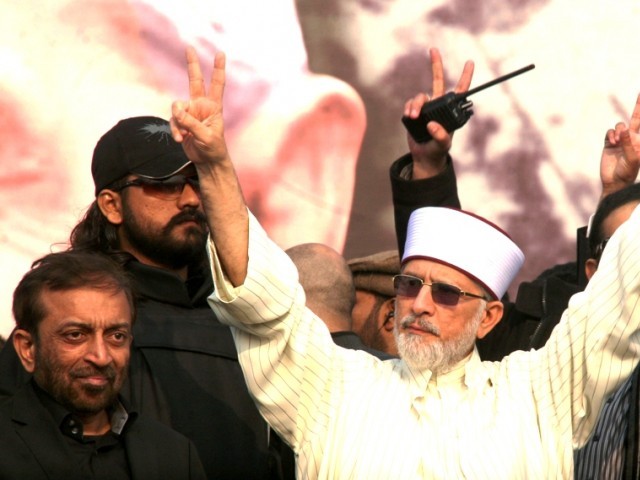 The establishment learnt from their failed experiment - went back to the drawing board, came up with Tahirul Qadri. PHOTO: SHAFIQ MALIK

Based on the political events of the last 10 days, one of the most commonly asked questions in Pakistan is:

As in what is going with the whole Qadri parade, what is up with Bilawal’s launch, and generally what on earth is going on in Pakistan?

Simply put, there are two sides going up against each other and all of these events, or whatever you want to call them, are just parts of that.

Who are these sides and what are they after?

One side to all this is the establishment.

For the last five years, the establishment has played one hand after another against a democratically elected government but failed, as for once, the largest opposition parties refused to play along with them. So a year ago, they launched their own horse in the race who initially did very well but later fizzled out like most of the establishment’s schemes.

So one side to this fight is these guys, but why are they doing this?

The answer to that is actually very simple but not very commonly discussed.

What the establishment is after is something dubbed as the ‘Bangladesh formula’. For years, our army and their army have been messing around in politics without much success. No matter how many times they took over, they were always kicked out eventually and in this process they ended up earning a bad name. But about four years ago, the Bangladeshi army finally cracked the code to solve this complicated riddle. The play was that the army does not get involved; instead a caretaker government needs to be formed that would include all branches of the state including judiciary and the military.

This way the army would get a seat on the table, but it would not be the bad guy as the caretaker government would make it a ‘joint effort’. And just to make things more ‘legitimate’, smaller insignificant parties would be invited to become part of the caretaker setup. That would then decide the rules for elections which would be delayed from their actual date as the new structures being designed just happen to take about two years to complete.

Obviously, the army has the strongest say as well as the most powerful guns and, of course, they have better logistics than anyone else on the table.

Also, in this space of about two years, the caretaker government would take all the tough decisions that need to be taken, with regards to foreign affairs and economy as the democratically elected politicians simply do not ‘get it’.

This is what is called the ‘Bangladesh formula’; a coup without the shame of a coup.

Since its success in Bangladesh, our establishment has been itching to use it here too, but have never really found the right time.

The play is simple – Karachi’s law and order gets ruined by the ‘third hand’ for at least two straight weeks, in the mean time about 500,000 people start marching on Islamabad from Lahore on January 14, all the while the Pakistan rupee keeps falling against the dollar.

The Lashkar-e-Qadri enters Islamabad, holds the city hostage and one thing leads to another – the army gets called in. And while this all of this is going on the courts get involved.

This is what the establishment is making a play for, as this opens the door for their attempt at the Bangladesh formula.

The other side which is made up of political parties, sans MQM, has been fighting the establishment long enough to realise that a play is being made.

In the last ten days, they have hammered out a date for elections which is supposed to be mid-may.

They are nearly done finalising the caretaker setup and they intend to put it in place by March 17, 2013.

The PPP, sensing an opportunity to play the victim yet again, found this to be the perfect time to launch their 24-year-old Chairman Bilawal Zardari in the political foray.

The bet PPP is making is simple – give the loyalist the grandson of Bhutto. And then, of course, hope to God that people forget that he is a Zardari.

The political parties have paid too high a price already to let democracy slip away this easily but the Establishment has pumped enough money in to this game to lose out now.

Additionally, the impending US pull out from Afghanistan means the establishment stands to make a lot of money and make a play for Afghanistan again, both of which as Pakistan’s history would tell you, are establishment’s favourite things to do.

So buckle up, Pakistan!

This is going to be one hell of an election season – just hope and pray that democracy wins.