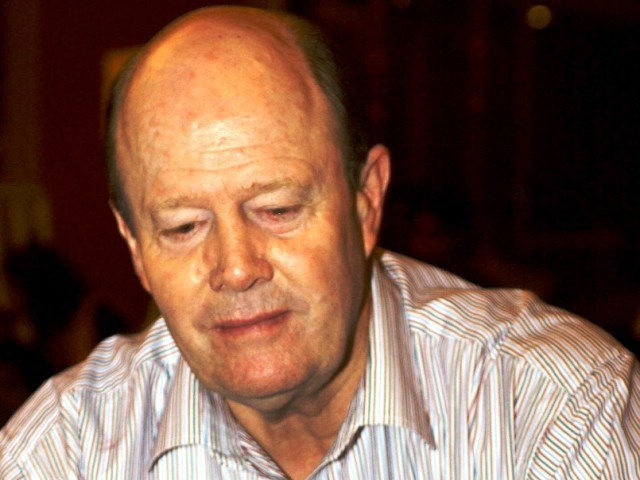 Having fought a lung cancer ailment, he succumbed to a heart attack in Sydney on 29th December 2012, aged 66. PHOTO: AFP

The first time I heard of Anthony William Greig I was listening into a Test Match special in 1972 – the first Ashes test at Old Trafford. The voice of John Arlott describing Greig scoring a 50, when England was in need of runs. He scored another 50 in the second and then took a few wickets in Australia’s last knock.

The match is remembered for a late assault by Rod Marsh, when Australia looked down and out. It did not win the match, but for us serial non-England supporters created last session excitement.

In those days live television was rare and when I saw recordings on PTV, it surprised me to see this tall (six feet six inches) gangly cricketer. His bat was held up and there seemed an inviting gap for the ball. Cricket was traditional then – pre One-day – therefore trendy stances were not in fashion.

His bowling also seemed innocuous, yet he was able to get wickets, because the ball moved both-ways to create uncertainty in the batsman.

Greig ended his Test career with a double, 141 wickets and 3600 runs with an average of 40 plus. In the non helmet days, a 40 average was considered the sign of a good batsman. It now seems to have gone to 50. All present day batting careers should be evaluated in that light. The helmet has had a huge effect on batsmen confidence.

When he ran out Kallicharran in 1974 as he left the field for close of play, a worldwide furor ensued; “This was not cricket!”

The decision was reversed overnight and Greig apologised. Later years saw his famous racist undertone message to West Indies in 1976 that they would grovel that summer.

That it was England who was made to grovel by Sir Viv Richard, was a humbling experience. But, after the 3-0 defeat at Oval, Greig made amends by dramatically falling on his knees to beg forgiveness and all was exonerated.

My two memories are just flashes and yet sped some light on Greig’s character. Hyderabad Test match 1973, day five post lunch England were in problems at 77-5, pitch turning, still behind first innings lead and it looked as if Pakistan would win easily.

Not so, Greig and Knott saw out the match, with some brilliant back against the wall batting. Cut to Brisbane 1974; a green and vicious pitch, Lillee and Thompson rampant. The English were physically dominated. Out walks Greig and hits both all over the ground. Every time he hit a four he would signal boundary himself. It was classic aggression and brinkmanship.

He got 110 that day and it is regarded as one of the bravest innings in cricket history.

For all that Greig would have disappeared into the annals of cricket history as a good cricketer, but for his two most famous contributions, post his retirement from Test cricket.

Firstly, professional cricketers owe him a debt of bringing money into the game. He was the one who led the WSC Packer initiative. At considerable risk to his career -in fact his career ended because of it- Greig ran the recruitment of cricketers as the front desk. Those who have not lived the division in cricket in 1977-78 would have no idea of the schism.

It divided cricket down the middle.

Pakistan’s own star cricketers faced the music also, being thrown out for two years, while the team lost badly in England.

Greig faced the brunt; lost his England captaincy and his place in the team. Nevertheless, cricketer’s earnings went from a pittance to international sports scale and also cricket was totally revamped to the look it has today.

He was welcome in Dubai, England, Sri Lanka etc and loved everywhere. Truly the status he achieved out of commentary, he could not out of cricket.

Fittingly, in June 2012, the MCC which had banished him in 1977 invited him for the Cowdrey Lecture to its members. It’s an honour accorded to few. There Greig lay to rest the bitter acrimony which had ensued out of the Packer era.

It was just not his fate that he could enjoy this final triumph, on being recognised by former adversaries. Having fought a lung cancer ailment, he succumbed to a heart attack in Sydney on December 29, 2012, aged 66.