How Bollywood entertained us in 2012…outside the cinema! 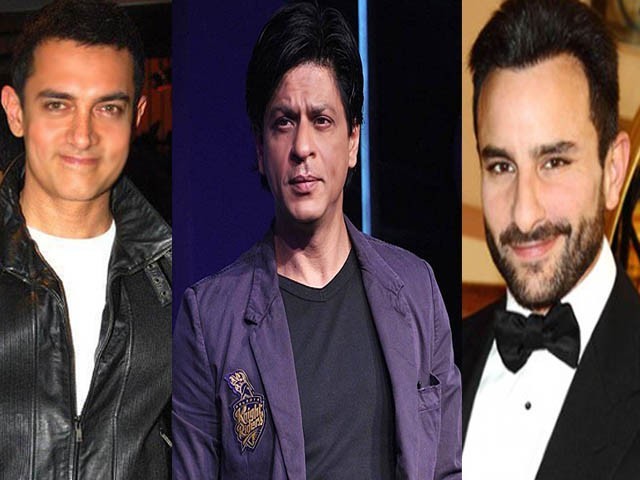 Here’s hoping you enjoyed this recap of a select few entertaining news stories from 2012 in Bollywood. Happy New Year - may the entertainment continue full-throttle in 2013!

What would Bollywood be without drama? And I don’t mean just the films.

The lives of former stars, current stars and even potential stars are scrutinised to death, sometimes over the most trivial of issues. Here, we compile a list of some of the more interesting, albeit inconsequential and even silly, controversies from 2012.

For the King of Bollywood, Shah Rukh Khan (SRK), this was not a good year for the most part. In the first half of the year, he was embroiled in two controversies – fist fights, no less – leading to Bollywood gossip pundits spelling the end of him. In the latter part, however, he pulled a coup – his name will go down in history as the hero of Bollywood kingmaker Yash Chopra’s last directorial venture.

In January 2012, Indian news outlets were abuzz with news that Shah Rukh Khan had slapped best chum Farah Khan’s husband Shirish Kunder at a party thrown by Sanjay and Maanyata Dutt for their wedding anniversary. Reportedly, the fight was initiated by Kunder, who was extremely drunk and had been following SRK around, making provocative remarks. Earlier, he had also sent out a distasteful tweet about SRK’s brainchild Ra.One which was unable to perform to expectations.

SRK and Kunder have never had a good equation. Rumour has it that even when Kunder was working as an editor on Om Shanti Om (the most recent film that Khan and SRK produced together), SRK was not particularly convinced of Kunder’s talents. This led to a souring in the friendship between SRK and Khan, and Tees Maar Khan (TMK) then went to Akshay Kumar with no contribution from SRK at all. A month before TMK was to release, both SRK and Khan appeared on their common buddy Karan Johar’s TV show ‘Koffee With Karan’ (on separate episodes, of course) and admitted to their strained relationship.

At the end, Kunder apologised for his obnoxious behaviour, but sadly SRK and Khan’s relationship appears permanently damaged. Had Khan taken a page from Kajol’s book (discussed later in this blog) and responded a little maturely by not getting involved in the men’s fight and giving public statements about it, perhaps there would still be a door open for the two former best friends to at least repair their friendship.

SRK was back amid similar news in May, when he got involved in a brawl with officials of a cricket stadium in Mumbai, where his Indian Premier League team Kolkata Knight Riders had just won a match. Officials said he was drunk and had behaved “improperly”, while SRK maintained that the officials had manhandled children and then abused him when he went in to stop them. He was eventually banned from the stadium for five years but his team KKR is allowed to play at the stadium.

Meanwhile, in February chotay nawab (young sir) Saif Ali Khan was also part of some bad news involving a scuffle, which was surprising given his squeaky clean reputation as a gentleman. Reportedly, the fight broke out at Taj Hotel in Mumbai, when a businessman complained to the management about the noise being made by Khan and his friends who were having dinner at a table nearby. Khan, apparently drunk, punched the man in the face and was arrested by police, eventually getting bailed out.

The case hasn’t died down yet and a charge sheet was filed against Khan this month.

That wasn’t his only share in Bollywood controversies this year. His marriage to long-time girlfriend superstar Kareena Kapoor in October was the cause of all kinds of speculation. Will Kapoor convert to Islam? Will she at least change her name to Kareena Kapoor Khan? Will Khan’s children attend the wedding? Was Kapoor no longer part of director Sanjay Leela Bhansali’s film Ram Leela?

Will they marry according to the Hindu tradition or Muslim tradition? That last one got a little out of hand, with some Indian Muslim clerics, including leading seminary Darul Uloom Deoband, termed the Saifeena marriage as “anti-Islam.” The actors, of course, reacted the way they have reacted to everything else: with class.

May you have a great and long life together, Saif and Kareena!

Controversy, however, was the flavour of the month in May.

If SRK had stirred up a controversy in that month, his archrival Aamir Khan wasn’t far behind. His immensely popular and well-done television show “Satyamev Jayate”, which debuted in May and ended in August, won a whole lot of praise. But critics didn’t let go of any opportunity to malign Khan’s admirable decision to use his star power for a cause much greater than selling toothpaste (sorry SRK, I still love you!).

From allegations that the show’s emotional content was doctored to claims that this was Khan’s attempt at trying to stay relevant (oh come on!), a million attempts were made to sabotage what the real purpose of “SMJ” was. But, although, the show managed to ruffle some feathers, all was hunky dory until a man who had appeared on the show decided to speak out against khap panchayats was shot dead in November.

I wonder if this will have an impact on the decision of Star Network, which aired the first season of “SMJ”, to go ahead with a second season of the show. It will be sad and unfortunate, to say the least, if the channel chooses to back out.

And for those arguing he was proving his relevance, once again: come on!

The Dutt and Varma blame game:

The one controversy where I feel personally involved (because I was among the four people in the theatre who put themselves through the torture of it) is the Department debacle. The film, directed by seasoned director Ram Gopal Varma, starred Sanjay Dutt and Amitabh Bachchan. Yet it is one of the most difficult films I have ever had to sit through.

And what is most annoying is that nobody is willing to take responsibility for it with Dutt and Varma blaming each other for the film’s complete failure and refusing to ever work together again. Varma claimed that Dutt was hindering his creative process while the actor and producer says that the director insisted on using 5D cameras which led to the disaster that the film was.

While Dutt is no stranger to controversy and has earlier blamed directors for his films’ bad performance, Varma has also been losing the magic touch from his wonderful films like Rangeela and Darna Manaa Hai.

It’s difficult to decide who to pin the blame on and if the two will ever go back to working together, but given Dutt and Varma’s recent work, it won’t be much of a loss for Bollywood.

Phew! That’s a lot of stories and I am not even finished with the month yet!

As if new ones weren’t enough, an old Bollywood controversy was rekindled when yesteryear superstar Rekha joined the Indian upper house as a member. While Rekha took an oath, television cameras zoomed in on Amitabh Bachchan’s wife Jaya Bachchan who is also a member of the house.

Well, do you remember the evergreen Yash Chopra classic Silsila?

At that time, rumours were rife that Mr Bachchan and Rekha were having an extra-marital affair and with the two women under the same roof again, the Indian media had a field day with this “replay of Silsila”. Mrs Bachchan was very unhappy with the media focus on her, but clearly the Indian public was not!

Two months later, in July, Mr Bachchan himself was in the news. As he carried the torch at the London Olympics, a group of Sikhs gathered outside the venue to protest Bachchan’s alleged incitement of murders of Sikhs in 1984, following the assassination of former Indian Prime Minister Indira Gandhi that year. However, none of the mainstream news outlets of Britain or India reported this event.

Talking about protests, we move on to September when a film named OMG! Oh My God created headlines because of it’s, shall we say bold, plot.

The film, produced by superstar Akshay Kumar and Paresh Rawal, shows Rawal as an atheist whose shop of moortis is destroyed during an earthquake. When he tries to file a claim with his insurance company, they tell him that they do not cover damages caused by “acts of God”.

The man then sues God in court, making representatives of Hinduism, Christianity and Islam respondents in the case. Hindu groups, including the fundamentalist Shiv Sena and semi-militant Bajrang Dal, led protests across Punjab and even managed to have the film’s screenings cancelled throughout the state.

The producers, however, have refused to apologise for the film that they say is only “anti-ritualistic” not “anti-religion”. Despite the brouhaha, the film managed to do well enough and that’s because of the strength of the research that has gone into making the film. It is a must watch, and do see it if you haven’t already.

On a side note, I must congratulate India on their thorough secularism, which allowed such a film to be thought of, made and presented in cinemas across the country.

There was a similar reaction in November to the song “Radha” in the film Student of the Year. FIRs were reportedly lodged against the film’s producers Karan Johar and Gauri Khan, but the matter is still pending.

Back in September, Ranbir Kapoor starred Barfi! It was officially nominated as India’s entry to the Oscars. But the decision was widely criticised and the film called “copied” down to its soundtrack. The director Anurag Basu, of course, defended his plagiarism as “inspiration” from other films; at one point even citing Martin Scorsese’s Hugo as a similar attempt to pay homage to cinema. But good thing that Barfi! did not make it to the Oscars’ short list because watching the film was really like sitting through an amalgamation of Charlie Chaplin films!

SRK is clearly controversy’s favourite child because the year started with something about him and it ended the same way. This time, it was the release date in November of his film Jab Tak Hai Jaan. While I continue to wonder why this useless film was even made, I would give it some respect because it was the last film that the great Yash Chopra made himself.

This is why it was in such bad taste when Ajay Devgan, the producer of Son of Sardaar, claimed that Yash Raj Films was using its “dominant position” to push his film out of screen options and served YRF a legal notice.

Here’s hoping you enjoyed this recap of a select few entertaining news stories from 2012 in Bollywood.

Happy New Year – may the entertainment continue full-throttle in 2013!