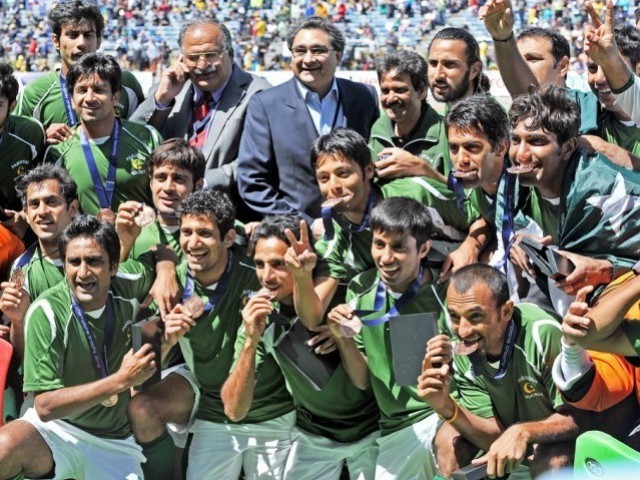 Asian Champions Trophy was a comparatively bigger tournament than Pak-India T20 series, but if it caught any attention, it happened only after India’s victory in the last T20 match. PHOTO: AFP

Most Pakistanis now know about the country’s hockey team winning against India in Asian Champions Trophy, all thanks to the cricket team being beaten by India… yet again.

Pakistan was declared the Asian Champion after a score of 5-4 against India. The Indian team boycotted and walked out when the penalty goal was reversed and the Pakistani team showed some Gangnam Style moves before taking the final round of the ground to celebrate their victory.

I know all these details because I was a part of the crowd at Al Rayyan Stadium, Doha, where the crowd outside the stadium was just as large as those seated inside. Some were trying to catch a glimpse through the net while others were watching the match from the roof of a nearby building.

In its news bulletin on Friday, PTV News reported a wrong score of 5-2 for the hockey final. The match was not aired by any Pakistani channel. On Thursday night, while the news channels were busy predicting Pakistani cricket team’s strategies for the second T20 match on Friday, the score of the hockey match occasionally appeared as tickers or side-news, only on some channels.

The Asian Champions Trophy was a comparatively bigger tournament than the Pak-India T20 series, but if it caught any attention, it happened only after India’s victory in the last T20 match.

Let’s stop calling Pakistan a cricket-frenzy nation. The truth is that we are made to believe we are one.

The spirit of Pakistani crowd during the final hockey match was no less than that in any cricket match. People had come dressed up in green with many wearing Pakistani cricket T-shirts from the previous World Cups.

Many had their faces painted in green and white, wearing green wigs or holding props, placards and flags. However, it was a shame that the hockey enthusiasts back home were getting live updates from their friends in the audience because the Pakistani media, like always, chose to give preferential treatment to cricket.

Since all this limelight has not helped much, I think it’s about time we stopped giving our cricket team undue attention and looked at the better things happening in the Pakistani sports scene.