Is Bilawal’s message what Benazir envisioned for the PPP? 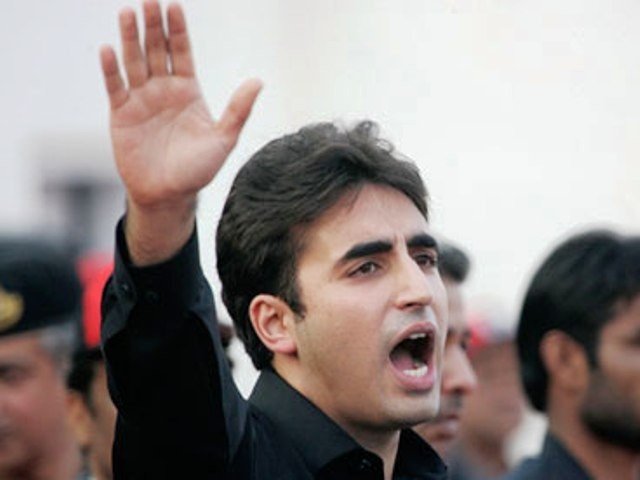 What a charming and fresh graduate like Bilawal offers may assist PPP to find its way to power for another term, but this is yet to be seen. PHOTO: REUTERS

As political parties gear up for the elections to claim their share of power, the PPP has launched its campaign, with Bilawal Bhutto Zardari taking the lead at the age of 24.

Bilawal, a graduate with BA Honours in modern history and politics from Oxford University seems to have inherited a knack for delivering crowd-pleasing speeches like his mother. This was not however the only reason why Benazir Bhutto was popular; she was known for her political insight and leadership qualities as well.

Bilawal’s strong-worded speech at Garhi Khuda Bakhsh criticising political opponents and the judiciary raises many questions about his understanding and approach to policy matters and the PPP’s future course of action.

Though Bilawal shares the same vision as that of Benazir’s, his speech turned to political vendetta, something BB had forgone on her return to the county in 2007.

His criticism of the judiciary also undermined his mother’s statement when she vowed to raise the national flag at the residence of Chief Justice Iftikhar Muhammad Chaudhry.

Assuming Bilawal had little input in writing the speech, the PPP ‘powers-that-be’ seem to have used the occasion to deliver a warning to the judiciary, a strong constitutional organ which has been challenging the weak policies of the democratic setup.

The few optimistic words in Bilawal’s speech were directed towards the PPP government’s achievements. These rang hollow as they did not match up to ground realities in the country.

To cite just one example, the employment rate has drastically gone down in the recent years, and we have seen our industrial sector crippled due to massive loadshedding in the country.

A right to education has been equally compromised as the literacy rate has gone down according to official data available.

The PPP’s slogan and manifesto of “roti, kapra aur makan” (food, clothes and housing) also sounds ridiculous when more than 65 per cent of Pakistanis are suffering from food insecurity.

In his speech, Bilawal also raised concerns and questions over BB’s killers going without trial, and roaming at large. A common man with a common understanding has failed to understand what (or who) is stopping the PPP government from arresting and prosecuting BB’s killers.

With five years of bad performance in hand, it seems the movers and shakers of the PPP consider Bilawal a trump card for the elections by cashing in on the Bhutto legacy. What a charming, perhaps naive rookie like Bilawal will bring to the table remains to be seen, but it is safe to say that the Garhi Khuda Buksh speech cannot be considered a moment of clarity or fresh political insight.

What does delimitation mean for Karachi?