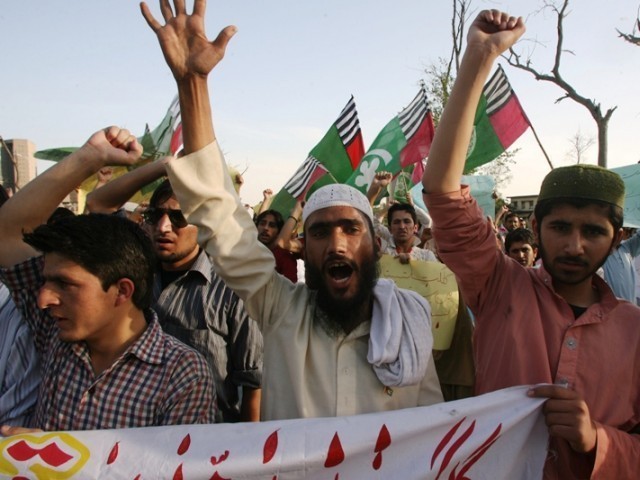 I have seen individuals under the Tehreek taking pains for peace, putting their lives at risk, and venturing into the ‘no go’ areas of the town, trying to talk people into peaceful coexistence. PHOTO: AFP

As sectarian violence plagues Gilgit, a group of dedicated natives is striving hard to revive harmony between people in the area. A beacon of hope for all of us, these individuals are striving to bridge the yawning divide between the Shias and Sunnis of Hazara which has claimed hundreds of lives over the years.

They belong to both the sects, and are united as the ‘Qaumi Amn Tehreek’. Most of them are natives whose forefathers hail from Gilgit’s Khomer Jutial, Majini Muhalla, Kashrote and Nagral areas.

Gilgit, the capital town of Gilgit-Baltistan, has witnessed rapid urbanisation over the years as people from remote valleys have moved to the town to tap several professional opportunities available here.

Owing to huge migration, outsiders have outnumbered the native population. The rate of crime in the city also recorded an uptick as migration increased. When people from different faiths and ethnicities dwell together, hatred and alienation often creep in.

Sectarian violence stems from the seed of difference. Gradually, it becomes a favoured pretext for conflict. Many personal enmities over the years have been settled in Hazara under the garb of sectarianism.

Unlike Karachi or any other metropolis, Gilgit is a ‘closed society’ with people having close ties with each other. Hatred manifests itself in violence much more quickly here.

The menace of sectarianism has widened the gulf between the rival sects on the one hand and strengthened intra-sect bonds, on the other, making the issue more complicated. As a result, a minor incident may lead to bigger catastrophes.

The continued violence has stalled development in Gilgit. But thanks to the Qaumi Amn Tehreek, an effort towards harmony is under way. I have seen individuals under the Tehreek taking pains for peace, putting their lives at risk, and venturing into the ‘no go’ areas of the town, trying to talk people into peaceful coexistence.

Though these individuals are received warmly by residents, they are back to square one with each sectarian killing.