If Pakistani dramas want to succeed, they need to compete! 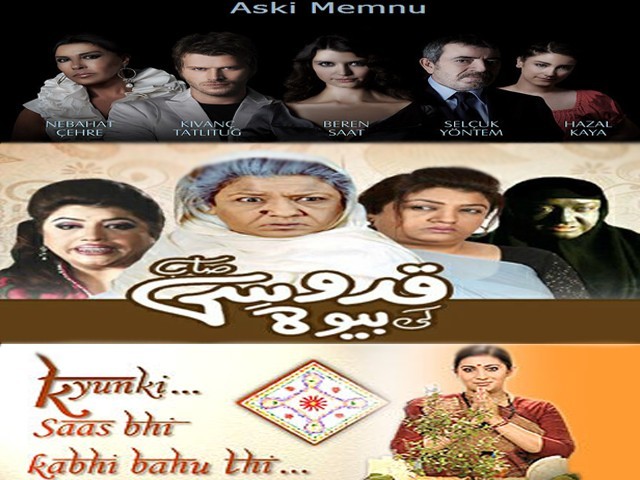 Do not be scared of the Indians, Turks or anyone else. If you are good, we will choose you over them. Just stop imposing yourself on us! DESIGN: ERUM SHAIKH

While browsing through the idiot box the other day, what caught my attention was a press conference hosted at the Karachi Press Club by representatives of the Pakistani media. They were complaining about how their industry is under threat from foreign content being relayed on our local television channels nowadays.

Yeah, yeah the controversy about the Turkish drama Ishq-e-Mamnu is all the rage these days, but what really perturbed me was the kind of statements they were giving out.

I do not happen to be a fan of any of those Turkish, Spanish or Indian soaps, but what irked me was that these people were trying to force the ‘be Pakistani, buy Pakistani’ mantra.

Hey, wait a second- aren’t these the same people who promote and wear glitzy designer labels from Paris and Milan?

They drive around in imported vehicles, their favourite tourist spots are Thailand and Malaysia, and they only travel by foreign airlines.

Doesn’t that speak of outright hypocrisy on their part?

Complaining that a Turkish drama is threatening the entire industry is simply outrageous.

Either they feel insecure about the quality and content of their own work, or they are just being a bunch of monopolists in a crony, capitalist world. Similarly, our automobile industry is lobbying the government to ban imports of used cars again, since they are so vulnerable!

Why pretend to be cultural activists and staunch patriots when in reality, our actors and directors are just scared of losing their jobs?

This does not surprise me because these are the same people who were whining and becoming hysterical when the government was not taking any action against the relaying of Indian movies, and also channels by our cable operators a few years ago.

It was the same line; Indian channels are taking away our business and intruding our cultural norms and now a Turkish drama.

My mother, along with several other Pakistani women, used to be huge fans of Indian soaps. Names such as Tulsi, Parvati, Jassi became our household names. While I admit that they were a complete drag, compared to what was being aired on Pakistani channels in those days, they didn’t seem to be all that bad.

My mom stopped watching them around 2010 and I guess for the right reasons. Ekta Kapoor had gone too far with her starry stories. Balaji’s decade-long honeymoon with Star Plus came to an abrupt end. Who could have thought that Tulsi Mayya with her cult like followers would have such a disgraceful fall?

On the other hand, my mother switched to Pakistani channels. According to her, the stories were far better and she had that instant connection with them!

A few of the Pakistani dramas are quite close to reality. Initially, I would poke fun at my mom for watching them; I had that stereotyped impression of them. Later, I realised that it is the quality of the content being relayed that matters, and not the person relaying it.

Take a look at Humsafar.

I didn’t get a chance to finish watching all the episodes. I watched just one and I really liked it. The script, storyline and the actors were refreshing. There was no typical ‘bahu’ (daughter-in-law) whining all the time, making unrealistic sacrifices, but a woman who dared to rebel.

Despite the grudge I have against the content being aired on several Pakistani channels, being a Karachiite, I happen to be a major fan of Quddusi Sahab Ki Bewa. I believe Hina Dilpazeer could easily knock out Smriti Irani or any other actress for that matter.

She is that good!

And so are many others; they just need to stop being insecure and believe in their abilities.

Lastly, as a consumer, it is my right to decide what I choose to watch. Isn’t this what a democratic society should be about? Freedom of choice?

My advice as a consumer to these people is; let competition flourish. Do not be scared of the Indians, Turks or anyone else. If you are good, we will choose you over them. Just stop imposing yourself on us!

However, if your slogan remains ‘be Pakistani, buy Pakistani’, then my friends, charity begins at home.

A student of finance and auditing in Karachi, Asad is currently studying French culture and language.