I met with the Mayans; they said the world isn’t ending anytime soon! 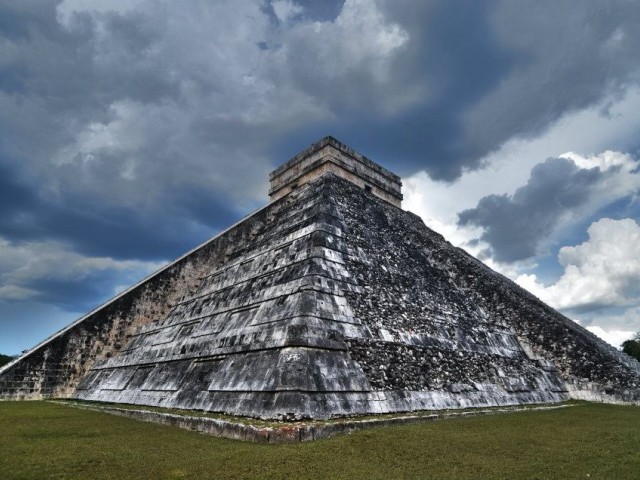 “Is the world ever going to end at all?” I asked. He pointed to the sky and said, “Only when the sun stops rising!” PHOTO: MARIAM MAGSI

I am sorry to disappoint you folks, but the world is not going to end on 21.12.2012 because the Mayans never made an apocalyptic statement alluding to a complete end to this world.

It is quite amusing to see people go into bouts of vigour, stocking up on essentials, sharing Facebook statuses and creating panic about this notion. I took matters into my own hands and decided to investigate this rumour further, by travelling to Mexico and meeting the Mayans themselves to gain a better understanding of this situation that has gone viral.

Needless to say, it was one of the most enlightening experiences of my life.

I explored pyramids and the Mexican life from the Yucatan Peninsula all the way to the state of Morelos where I was volunteering with children from low income families. Once back in the “Pit of Snakes” or “Cancun”, I was able to sit down with shamans, historians, healers and storytellers in Mayan villages, assertive and determined to get to the bottom of this theory about the end of the world.

The full moon was shining over us as I sat down with Shaman Malo, to consume warm tortilla bread with a glass of coconut water. Warm, sweet breeze was blowing, and many had gathered around us in the hopes for enlightenment and higher learning — the kind you don’t get at school.

I had touched upon the topic of the world ending and a dark cloud swept over the Shaman’s face. He seemed discomforted and decided to talk about this subject in front of peers and students.

“First of all I would like to start with the Mayan calendar. You can do extensive research on this and speak to archaeologists who have dedicated their entire lives uncovering our pyramids, ruins and ancient sites. Our calendar is cyclical in nature and not apocalyptic. In other words, we believe the world does not end, it only recycles, and based on the way history has unfolded, is this indeed not true?”

I felt elated. Not because the world wasn’t ending, but because I decided to seek out the truth.

I was also one of the few people who didn’t give into this notion and I realised we can know nothing about anything until we immerse ourselves into it and investigate, challenge and question the validity of the statements rumoured and spread by the masses.

Confused and curious, I asked,

“Why is the world entertaining this deception then?”

“People have even gone as far as to write up their wills, stock up on imperishable items and have built shelters in their basements all because they think the world is coming to an end.”

Shaman Malo threw his head back and guffawed so hard, his belly rumbled and moved up and down much like the laughing Buddha. His small, beady eyes crinkled up and his mouth turned into a smirk.

“Well my dear child, this is the maligning of our culture and heritage at the hands of money hungry and greedy con artists who have no strong backing or evidence about the statements they are making. They have twisted our words and gone out there into the world to make fools out of everyone. They have accumulated immense wealth by making movies and writing books, blaming the entire doomsday idea on us poor villagers. What saddens me is how the world and its intelligent, educated people have fallen right into their trap, spreading this nonsense further, while we Mayans out here in Mexico keep meeting tourists, volunteers and socials workers and find that it is our duty to let them know that we never, ever once said the world is going to end on December 2012.”

Over the next few days, I quenched my anguish by conversing with various people who had ample knowledge about Mayan history. I also obtained a copy of the “Popol Vuh” a rather complex and intense ‘Book of the People’ that delves into historical and mythological narratives of the K’iche’ kingdom in Guatemala.

Some subjects it touches upon are creation, death, ancestry, history and cosmology. There are gods, underworlds, jaguars, environmental theories, migration details and tribal conquests and after days of mind numbing focus I was on the last few pages on the grass at the Ek’Balam pyramids, a Yucatec-Maya archaeological site undisputedly the throne of the Mayan kingdom.

Suddenly, I saw two dusty, brown shoes standing near me and my eyes led up to a plump, aged tour guide with the marks of experience etched into the sunburnt lines on his face.

“You are reading the ‘Popul Vuh’ and I could not help but approach you. It is quite the daunting book, no?”

“It certainly is. I had decided I would visit Mexico and speak to its people myself, the Mayan tribes in particular, to gain a better understanding of a speculation regarding doomsday this December.”

“Ah yes! The apocalypse, indeed! What a fine buck they’ve made out-there distorting our history. If only that money could have reached our poor families, instead of lining the pockets of liars and ill educated people with no knowledge on these subjects.”

We stared out at the grand, magnificent and eroding structure of the pyramids opposite us. The scene was epic and beyond belief. As far as my eyes could see, the archaeological grandeur was surrounded by dense trees and greenery. This ancient mark of history stood out under the blazing, Mexican sun. Existentialist questions sped through my brain at a vast speed.

(Ruins on the Mayan Riviera.)

“You see, let me explain something to you. The sun rises and sets every single day without fail. It is the ultimate truth. Night falls and disappears and falls again. That, too, is the ultimate truth. Crops are sown and harvested, extracted and consumed only to be sown again. It is all a circle. Even the shape of this Earth we are currently visiting is a sphere, which makes it all the more important to put back what we remove, to keep the cycle going.” he told me.

“That is how we Mayans think and it is our supreme ideology. What will fall will rise; what will rise, will fall. But it will not end. There have been plagues, wars, famines, droughts and conquests but everything eventually gives way to light and hope, newer beginnings and fresher eras.”

The man made a lot of sense. Were we, in fact, self-destructing and feeding into this idea of the end of the world by interrupting the cycle of nature, by removing trees and not putting them back, by polluting waters and not cleaning them, by taking away majority of the earth’s resources, with no replacement?

I urged him to go on.

“December 21 is very significant for my people. Not because the world will end, but because it will change. My ancestors were obsessed with time keeping and this year marks the end of the 13 baktun to give way to the start of the 14 baktun completing another age of mankind. If the Mayan tribes that invented these sophisticated calendars and theories were alive, they would have been celebrating with dance, music, food, rituals and joy, basking in the pure happiness of the start of yet another era of pure living and experience, not death, doomsday and destruction. Regardless of having been colonised and made to convert to Christianity, many of us still believe in the power of our heritage. We believe in the renewal and rebirth of life and we celebrate this. We also believe that after this year, people will shy away from consumerism, materialism and capitalism, to give way to a more compassionate and thoughtful state of being. Oppressive regimes will be toppled and people will take their world back from unjust rulers. Do you not see this happening all around you?”

I gave what he said a couple of minutes of silent contemplation. People were definitely more socially aware than ever before. With the advent of social media, many people, worldwide, were speaking out against tyranny, holding marches and protests, the revolution in the Arab world being a prime example of this.

Those who didn’t bother recycling in the past were suddenly environmentally aware. I personally knew people who were planting trees, conserving water, switching to energy conserving light bulbs and being pro-active in saving this planet. Moreover, throngs of people were turning to yoga, reiki, meditation and the art of spirituality; they were growing into self aware, self conscious and socially evolved individuals.

“Well, child, it’s time for me to head back to the pyramids, because I have a group of six American professors coming in soon.”

He stood up, brushed the dirt and grass off his worn out khaki pants and gave me a courteous nod of the head, his wise eyes twinkling away.

As he walked away he said,

“Go out there and tell the world what I’ve told you. You have come here for a reason, we met today for a reason, and you have the opportunity to inform people and make them see the truth.”

“So let me get this straight,” I said in one last attempt to validate and solidify my conclusion,

“Is the world ever going to end at all?”

He began to walk backwards and pointed to the sky.

“Only when the sun stops rising!”