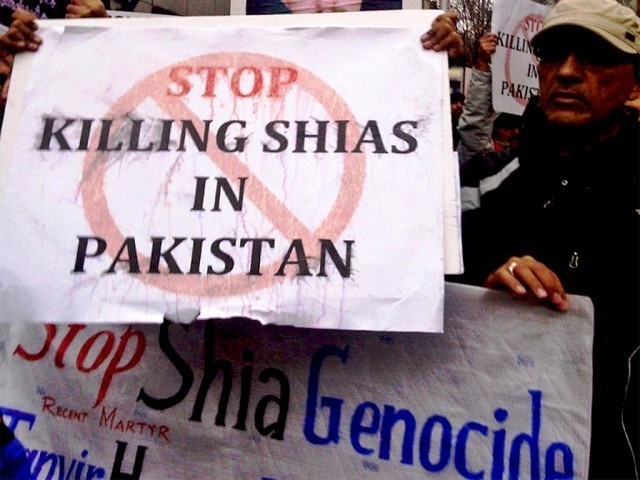 How is this grand protest different from what we witnessed at Tahrir Square in Egypt last year? It didn’t get the coverage it deserved. PHOTO: AFP

Friday Dec 14, 2012; on a night unusually cold for Karachi’s standards, more than 50 thousand people decided to join a sit-in protest against the ongoing Shia genocide in Pakistan.

I was one of them.

After being stuck in several traffic jams I eventually reached MA Jinnah road (named after the country’s founding father whose own personal religious affiliation is ironically debated time after time). The crowd grew from a few hundred to thousands in a matter of hours. Later that night, the cosmopolitan experienced an unannounced strike but that didn’t stop the protesters from growing in numbers. What surprised me the most was, clear attendance of women and children who stood shoulder to shoulder with men. All of them gathered for a common cause, a much needed attention to the Shia genocide in Pakistan.

Unlike regular Muharram processions of Ashura, this gathering had little or no support from the government as far as security was concerned. This made the protest more prone to a terrorist attack but that didn’t stop protesters from pouring in. Which made me wonder that perhaps each of these attendees have lost someone in their family or circle of friends in this genocide. Yet, they choose to protest in these difficult conditions and didn’t join the path of violence.

Now, for almost a decade, Pakistan has become a hub for terrorism. Attacks on sectarian and religious minorities, attacks on Pakistani Army, rangers and police have become the norm.

Year after year, we as a nation have failed to identify our number one enemy: Is it unmanned drones that fail to differentiate between an innocent civilian from a Taliban commander? Or a teenager equipped and motivated to take lives in the name of religion? Or a heartless monster, that shoots a 72 year old Swedish Christian missionary who dedicated her life to social work? Everyone has their own version of the story and every version blames a separate villain.

This ever widening difference of opinion has a lot (if not all) to do with what our media chooses or does not choose to broadcast. Political leaders and judges of the highest courts are often blamed to pick up on media popular issues in their rallies and respective suo-moto’s.  If this trend has affected anyone the most, it’s our religious and sectarian minorities.

According to a report an average of 50 Hindu families migrate to India every month, because of worsening economic and social maltreatment of Hindus in Sindh. How many talk shows were conducted on the persecution of the Hindu community? How many articles were written to highlight this mass migration? Opposition leaders like Imran Khan and Nawaz Sharif, who find excuses to highlight the government’s incompetency and corruption, somehow let this one slip by.

Most recently, over a 100 graves belonging to Ahmadi community were desecrated in a posh neighbourhood of Lahore, not far away from where the Sharif family lives. The reaction was more criminal than the act itself. No dharna from PTI, no walk out from PMLN and no suo-moto.

The persecution of minorities and negligence of Pakistani media took a new leap when a 14-year-old, Syeda Mehzar Zehra was attacked on her way to school along with her father Nazar Abbas, who died in the attack. Eyewitnesses reported that Mehzar was hugging her bullet wounded father when she was being fired at.

The way the media handled the news and the reaction that came from all political parties raised serious questions on the science that goes into the reporting of such events and the follow up reaction by our political leaders. It was very natural to compare Mehzar to Malala, another poor girl who was attacked by forces of similar nature, but Mehzar’s tragedy didn’t get the deserving media attention unlike Malala’s story. Mehzar who faced an unimaginable emotional and physical blow remained unnoticed for days until the issue was raised repeatedly on the internet by the Shia community.

When I dared to inquire the reason from a few journalists and bloggers, I was told not to compare the coverage of the two events, considering Malala’s father unlike Mehzar’s family are very cooperative with journalists and are more media savvy.

Interestingly, around the same time I was acquainted to Tahir Imran a Pakistani journalist (producer at BBC), who covered Mehzar’s story. On asking how he got so lucky, he replied that he just Googled the local hospital’s number which after a few minutes delay relayed his call to Mehzar’s mother.  Guess it takes only a Google search and few minutes of waiting to cover a story as important as this.

Whenever a suicide attack takes place in Pakistan, a certain section of society and political leadership justifies it as a reaction to drone attacks in the North. But here is a refreshing example of a non-violent protest where over 50 thousand people protested for over 40 hours or more and at the end of it no car was torched, no life was lost and no public property was put to harm. And how is this grand protest (although similar in nature) different from what we witnessed at Tahrir Square in Egypt last year? It didn’t get the coverage it deserved.

“In the End, we will remember not the words of our enemies, but the silence of our friends” – Dr. Martin Luther King, Jr.