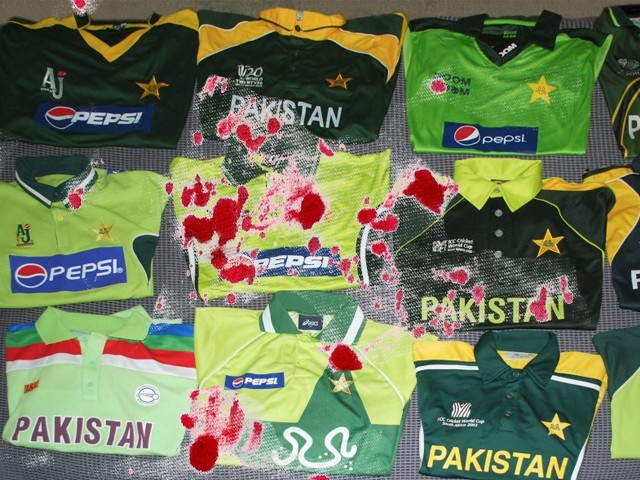 It does not really matter that Zeeshan was served diluted phenyl, dishwashing detergent or acid. Apparently it does not matter whatever may happen as long as the team victimised is Pakistani. DESIGN: ERUM SHAIKH

Kunal Anand’s rationale in his blog on Zeeshan Abbasi’s case is very impressive. He believes that the tradition in his country, ‘the guest is god’, serves the guests well.

Among other things, he suggested that we, Pakistanis, should not to react too harshly towards this ‘sad incident’ as the action cannot be taken as India’s conspiracy against Pakistan’s captain but has more to do with negligence.

I do believe I agree with what he had to say; the entire nation cannot be held responsible for the act of an individual- especially when the culprit has been given his due.

“Even Pak-India series will not be affected”, said the PCB chairman rightly.

It does not really matter that Zeeshan was served diluted phenyl, dishwashing detergent or acid. Apparently it does not matter whatever may happen as long as the team victimised is Pakistani.

The point I would like to raise today is why do Pakistani players have to face such incidences in every nook and corner of the world?

Please refer to the ‘sad incidents’ below, exemplifying the treatment bestowed upon Pakistani players in various parts of the world.

Manager, Akhtar Abbas, requested the event management to take a dope test of the US players, alleging unfair competition as the Pakistani team was upset over their narrow loss to the dope tainted US team – five of whose players tested positive, by the way!

After the complaint, the US team members were unhappy with the manager and started beating Abbas during the Pakistan-Norway match when he left the premises to use the wash room.

Unfortunately and predictably, no action was taken by the Pakistani management to punish the culprits.

2. Pakistan-England Test match 2010: Broad hit Zulqarnain in frustration that aggravated his injury and ruled him out of the Test series

Pakistani cricketer Zulqarnain Haider, while playing his début match against England played an unexpected innings and made 84 runs and in turn frustrating the English bowlers- who wanted to bowl Pakistani tail-enders out as early as possible.

However, Zulqarnain’s resistance kept them away from their destination and this aggravated Stuart Broad into throwing the ball at Zulqarnain, injuring a finger on his right hand.

The match referee took immediate action, charged broad with misconduct and fined him with £3,000 for throwing the ball at the Pakistani player. Pakistani captain Salman Butt showed his concern on the issue; however, the PCB remained a silent spectator.

According to reports, the match was levelled by Pakistan 3-3 in the last few minutes of the game. Indian players, led by midfielder Gurbaj Singh, attacked the Pakistani players with hockey sticks turning into a full-fledged brawl.

Syed Imran Shah and Shafqat Rasool sustained injuries during the scuffle. Pakistani players, however, did not retaliate and instead lodged a complaint with the umpire. Manager Khawaja Junaid, however, downplayed the entire incident.

A cricket stadium, capable of seating 100,000 people, was practically empty when the match was marred by the rowdy behaviour of raucous spectators that eventually led to forcible eviction from the stands.

Pakistan beat India by 46 runs in The test match and the crowd took to throwing food and bottles at the Pakistani players when the Indian team was nine wickets down.

Again, no compensation for our team for this crude behaviour!

5. Fielders wearing helmets against India in 1987

A strong Pakistani team defeated India in the ‘Cricket Diplomacy’ series under the leadership of Imran Khan. Indian spectators threw stones at Pakistani fielders when they were fielding. The Pakistani team left the ground in protest.

Sunil Gavaskar spoke to the crowd on speakers and asked them to respect their guests. Imran Khan however guided his players to wear helmets on the field if they wanted to save themselves from the crowd’s torture.

No big deal – the game continues and we, yet again were persecuted.

An Australian spectator tackled Pakistani fielder, Khalid Latif, when he was fielding at deep mid-wicket during a match between Australia and Pakistan. It was an unexpected and unfortunate incident for the Australian management and they took appropriate action.

The spectator received a lifetime ban from the ground and faced a fine of A$9000 under state law.

However, as expected, the Pakistani management did not even bother to address the issue or give an official statement regarding the incident.

Taking all this into account- all I can say is that Kunal spoke well for his people. If the ambassadors of peace- who tour different countries with Pakistani players say nothing to help their own players- how do we ensure that they are treated fairly? When will the people of Pakistan speak up for the players of Pakistan who visit other countries under threats that could one day – God forbid – prove fatal?