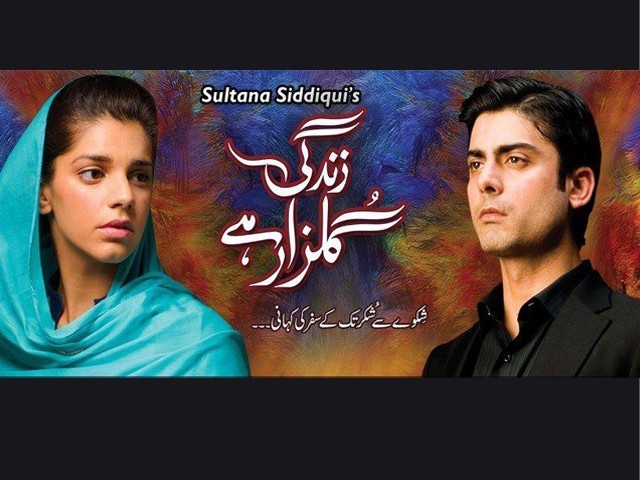 Sanam Saeed is focused on stepping one foot in front of the other despite the odds weighing down on her, holding her back, who pens the miseries of her life with self-deprecating honesty. PHOTO: PUBLICITY

After receiving countless amounts of messages from my friends to watch the new drama serial, Zindagi Gulzar Hai, I finally spared some time to catch up with the few episodes that have aired so far.

Given the hype surrounding the show, I wasn’t surprised when from the outset, a similar plot was introduced- a plotline that serves the basis for many Pakistani TV series.

It reminded me of the serial, Humsafar.

No, not because the same actor is acting in this drama, though I have to admit it certainly added to the likeness of the two drama serials. It is primarily because, both the serials show an affluent matriarchal family in which the woman, especially the mother, wields unusual authority and teeters on the brink of transgression.

In Zindagi Gulzar Hai, Zaroon’s mother is successful in her affairs and makes a show of it by unduly criticising her husband. In dealing with familial affairs, however, she is often careless and mindless. She is snobbish and does not like being questioned.

The children go about their daily lives, not bound any limitation whatsoever. When someone frowns down upon this, one of the parents shrugs it off in a way that suggests that their children are mature adults.

Yet, the daughter will be seen brazenly wearing a shirt that reads, “Little Miss Jihad“. But that has little to do with the drama. The T-shirt is a story in itself.

On the contrary, we have the lower middle class family that is striving to reach the top.

My concern, however, is not the lower middle class. This, if anything, is portrayed aptly and follows standards of other shows in which there is a sincerity with which the middle class is dealt with. Perhaps it is easier to infuse emotions when we find ourselves confined to a certain lifestyle, and from which we only wish to escape.

Sanam Saeed has played well the role of Kashaf, a girl from a middle class family who is being crushed between the emotional distress of having an uncooperative father and joining an elite university, where she meets her insecurities.

There were a couple times when the dialogue was too over the top: the admission result day when Zaroon and his friends mock the girl who outshone Zaroon; the drive back to his home; the scene in which Zaroon’s sister is pestering him to drop her off to a friend’s, and so on. The depiction of ‘spoiled rich kids’ seems a little overdone.

Let’s just say, in those two episodes I watched, my brow furrowed and my head shook with disapproval quite a few times. I understand that it is important to use slang in conversation, but throwing “yaar” in every scene is unnecessary and irksome.

The elite family structure, portrayed in Zindagi Gulzar Hai, is depicted as self-righteous with complete disregard to principles. It is portrayed in such an extreme way that it almost looks unrealistic. Coupled with mediocre acting skills on behalf of a few actors, particularly Mehreen Raheel and Ayesha Omar, it becomes completely unbelievable and at times hilarious. There is little truth in the acting- a truth that so easily lends itself to Sanam Saeed, as she slips into the character of a young girl.

Having said as much, the actors mirroring the typical middle-class Pakistani roles are redeeming the show for me, especially when it comes to the aesthetics. Kashaf is shown dressed in very plain clothes and so are his sisters and mother. Unlike many other dramas where lower middle class girls are caked in makeup, this one shows a very soft, realistic image of the sisters.

Samina Pirzada does not disappoint. Where she can play the role of a rich, glamorously vengeful woman, she also does justice to her role of a government school principal and stressed mother who sacrifices all she can for the best of her children. However, she is not shown to be suppressed, which is great. She has a soft motherly aura, but is also a determined (and at times stern) woman who likes to make her own decisions.

Let’s hope the next few episodes of this show reveal a deeper theme and hook me in. I have unending faith in the Pakistani drama industry and I know that the actors in this show have the capacity to put on something really special.

An English and communication studies student at the University of California who loves reading regional fiction and cooking.