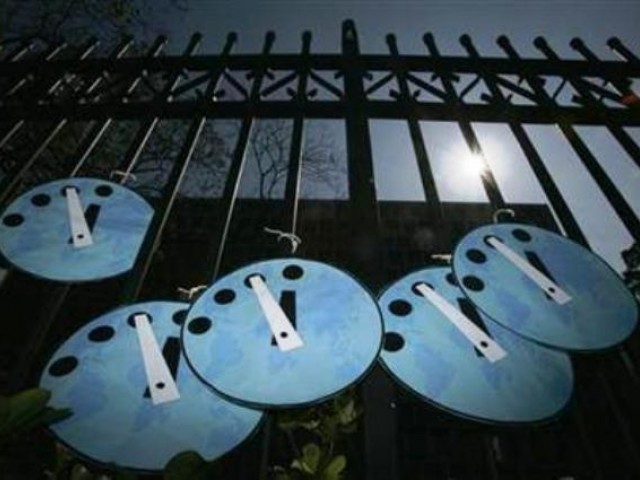 What about being hit by an asteroid or a meteor? One such episode created a huge impact and wiped out the existence of dinosaurs from the face of the earth, 65 million years ago. PHOTO: REUTERS

I was planning on have an amazing winter break until I watched the movie “2012”. It scared me to death and made me reconsider my future plans. The movie depicts a global cataclysm that brings the world to an end in 2012.

Since the past decade, a lot of people believe in the hoax of doomsday arriving on December 21, 2012.

The public’s concern about this date blossomed into a major presence on the internet and spread internationally. Some conspiracy theories linked the end of the world on December 21, 2012 to the ancient Mayan calendar.

Can you guess why? Only because the Mayan calendar ends on December 21, 2012.

In order to justify the world’s end on this date, a number of theories are making rounds on the internet. Right now- (the time I am writing this blog), there are only three days left to the predicted end of the world.

Let’s analyse the possibilities that can cause the destruction and depletion of this beautiful planet of ours. After all, we should expect the unexpected.

Some theories suggest, an inter-galactic alignment that would cause chaos on the earth leading to ultimate destruction. It’s really depressing how people forward such news on social websites without any verification at all. It takes less than a minute to enter the key words in Google and check what pops up. There is no such inter-galactic or planetary alignment expected in the next several decades. Even if these alignments occur, their effects on the earth would be negligible.

Therefore, it is safe to preclude this phenomenon as a factor to cause the end of the world.

What about being hit by an asteroid or a meteor?

One such episode created a huge impact and wiped out the existence of dinosaurs from the face of the earth, 65 million years ago. A meteor shower called Geminid  is expected to set to peak on December 13 and 14. However, it cannot cause the end of the world as Geminid comes each year in December, and was witnessed a few days ago on December 13.

According to the latest news from NASA’s Near Earth Object Program, there is no possibility of the earth being struck by a giant asteroid or a meteor in the near future.

Hence, there is nothing to be worried about from this angle.

But, hang on; a 3.4 mile long asteroid known as 4179 Toutatis, was expected to pass the earth. Could this cause the end of the world?

Lucky for us, this giant rock passed over the planet at a safe distance of 4.3 million miles and does not pose any threat to us.

Therefore, we do not need to send a team of deep core drillers to plant nukes on the asteroid (remember Armageddon, the movie?). You can follow the progress of the asteroid via the Slooh space camera online.

In contrast to the predictions pertaining to a sudden change in the Earth’s climate, we haven’t witnessed any increasing number of natural disasters and unprecedented weather events such as earthquakes, volcanic eruptions, hurricanes, tsunamis, and floods. Nor, is there any prediction of any unexpected disruptions in earth’s climate.

Consequently, the weather factor can be safely eliminated from the list of the end of the world possibilities.

Another theory came out of nowhere, suggesting that the magnetic poles of the Sun will reverse at the end of 2012. It may cause a serious knock-on effect on the earth and a sudden twist in the orientation of the earth’s magnetic poles as well as a reversal in its rotation.

When I first heard this theory, I remembered “Superman”. In the movie, Superman flew around the planet against its rotation so fast that he got the Earth to reverse its spin.

I am afraid; I can’t believe this “Reversal of the Earth’s Rotation” theory. This is impossible. Both the Earth and the Sun undergo regular magnetic pole shifts, but it occurs over a huge time scale.

There is no evidence that a polar shift on the Earth is occurring in the next several thousand years. Even if such a shift occurs, it can in no way cause the Earth to start spinning in the opposite direction.

Let’s not forget the giant solar storms that can eradicate the life on earth. Solar activity occurs at a regular cycle of approximately 11 years. However, there is no special risk associated with the year 2012. The next solar activity is expected to occur after a couple of years and is predicted to be an average solar cycle, no different than previous cycles throughout the history. No surprise here.

To create a little hope for the end of the world enthusiasts, let us not forget the possibility of a nuclear world war that can extinguish humanity on earth, within no time. At present, we don’t see any world-wide political instability of a magnitude that can start a nuclear war within a couple of weeks, do we?

I am, thus, happy to conclude that our beloved planet, the Earth, is not going to end, at least not in 2012.

My advice, make plans for New Year’s Eve; go out and have a great time!