Nothing better to do? Wage war over Ayesha Omar’s T-shirt! 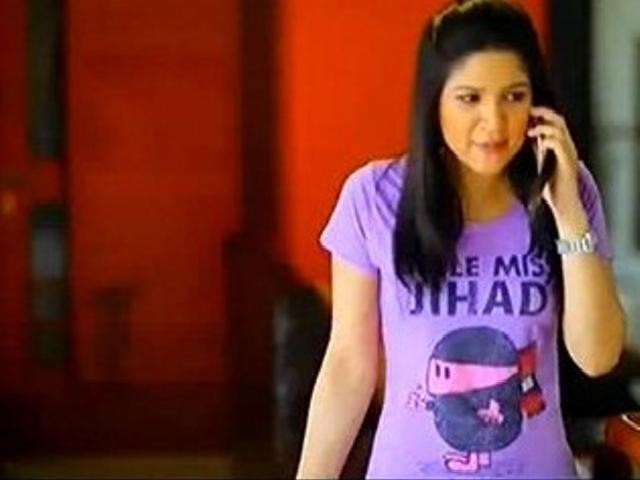 The screen time of the actress in the offensive T-shirt was around 45-60 seconds or maybe a few seconds more. And those few seconds have garnered this furious reaction from the viewers. PHOTO: SCREENSHOT

Recently there has been hot debate going on over a T-shirt Ayesha Omar wore in one of the scenes of the ongoing drama on Hum TV, called Zindagi Gulzar Hai.

There has been outrage on social networking websites (especially Facebook) and many people have been blogging about the huge offence to Islam that the T-shirt apparently caused.

The reason behind all the fury is not because she wore a T-shirt but because the shirt says ‘Little Miss Jihad’. It also sports a cartoon of a veiled woman with a bomb tied to the back of her head. The screen time of the actress in the offensive T-shirt was around 45-60 seconds – or maybe a few seconds more – and those few seconds have garnered tremendous fury from the viewers.

Few people remembered that ‘Little Miss Jihad’ is actually the name of a movie.

Sentiments of people across the nation have been hurt and they have not tried to hide the pain. It is understandable; after all, jihad is an important and sacred part of Islam. Muslims have been known to react over huge offences to Islam like amateur movies, derogatory cartoons, which represent the sick mentality of the artist and, now, T-shirts.

According to them, they are fulfilling their duty as a Muslim.

Now, people here they can sit back and be as immoral as they want in peace as their duty towards Islam has been fulfilled.

I am not debating about whether the actress’ action was right or not. Even if she did it on purpose – which she says she didn’t – it doesn’t matter because she did nothing wrong!

The pious Muslims who are condemning her for her actions and telling her to seek forgiveness from Allah (SWT) are the same people who are not hesitant when it comes to drooling over her beauty. Is this not ‘immoral’ and against the teachings of Islam?Yet, for them, wearing a T-shirt with an offensive slogan is more disturbing than the brutal murders and destruction of property in the name of Islam.

Isn’t torching cars and buses and killing minorities in the name of Islam, an insult to jihad? How come we see no blogs or outrage over these blatant acts of terrorism, but are infuriated over a T-shirt?

My point here is that what has Ayesha Omar done that is so new? All of us make jokes about our shortcomings as a nation on a daily basis. We lie, we cheat, we backbite and commit all the sins we can, then curse the infidels and go to sleep. Yet we have the guts to stand up as representatives of Islam and declare her hell worthy – a decision only Allah (SWT) can take. Even the ‘misled’ actress knows that the authority of labelling others does not lie with us, and that mistakes should be forgiven, so why make a mountain out of a molehill?

Need I even mention the great sin we commit by trying to take divine decisions?

This is not our job. Leave it to Allah (SWT); forgive and move on.

A Mass Communication undergrad and a blogger, Farwa tweets as @fbNaqvi. twitter.com/fbNaqvi