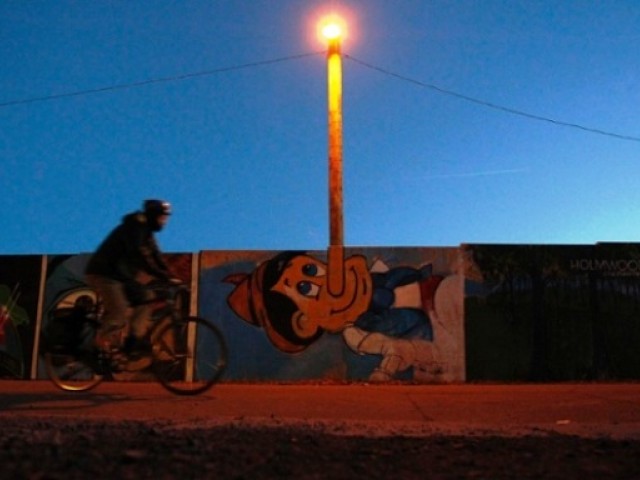 How do you navigate a city based on a description from 65 years past? How do you guide yourself with landmarks that don’t exist anymore? And what do you do when the idyllic description of the city is confronted with the stark, present-day reality?

That is what happened to someone I met this week.

My grandfather bought what would become our family home in Rawalpindi from a close friend, a Sikh, who had chosen to migrate to India after partition. A lifetime later, that friend’s granddaughter made her first trip to Pakistan, for a pilgrimage to the Gurdwara Panja Sahib in Hasanabdal.

While she was impressed by the cleanliness of Islamabad, she was silent on the condition of Rawalpindi.

Older parts of the city have turned into a series of dilapidated buildings hovering ominously over pedestrians and cars attempting to navigate narrow streets. These buildings, in their heyday, were described by current and former city residents as part of the lifeblood of the city. While I have no medical training, the condition of the buildings would be enough to diagnose Rawalpindi with blood cancer.

Zahid Rabbani recently wrote a series of articles for this paper’s Islamabad section in which he called attention to the state of decay that many of the city’s notable landmarks stand in. Reading the articles, I felt a sense of embarrassment at what has become of the city my parents grew up in.

But then, embarrassment was replaced by anger, when it became obvious that the institutional structures to maintain these buildings not only exist, but have existed since this country was born.

Unfortunately, a lack of will, or maybe attempts at land grabbing, meant the buildings were never cared for and marked as heritage sites. But then, who cares about a building when places of worship — non-Muslim ones of course — are in worse shape than a china shop after a sacrificial bull’s failed attempt to hide inside.

I won’t go into detail, because my colleague already has, but I can only wonder why the city government has done so little to maintain the city’s history. That question of course can easily be answered by the fact that one of the cantonment areas was successfully sued in court after authorities demanded that residents — who were getting tainted water through the taps — pay for the installation of new water lines, despite the fact they already pay for water supply. Instead of budgeting and charging for water and maintenance, it would seem the relevant civic authority had only charged for the former, or more dubiously, had put the money to ‘better’ use.

Meanwhile in Islamabad, the CDA, ostensibly a cash-strapped body, has no problems giving away some Rs320 million a year in ‘charity’ to IESCO. This was only discovered after a streetlight census revealed that the city only has 45,000 streetlights, compared to the 65,000 that exist on paper.

The difference can be explained through recent roadwork and expansion, for which lights are torn down and may or may not be replaced.

Shoddy accounting of the number of lights, such as not subtracting the number that were torn down, would be enough to cause the massive over estimation. The question though, is why such figures existed on paper, and why nobody from the relevant department bothered to check this out when proposals for replacing the streetlights with LEDs were being pushed forward.

This makes even less sense now, considering they have budgeted for 145% of the streetlights in the city.

Taxes are meant to be spent, but the spending should be on the people, not in the form of a gift to boost IESCO’s profits. Instead of cutting essential services, bad record keeping and innumerable redundancies are the areas where cuts should be focused. The CDA spokesperson said they would get the money back and that there was no chance of corruption since IESCO had indeed been paid. If the CDA does get the money back, good, but it doesn’t really deserve to.

The law is not meant to protect the ignorant from their ignorance, or in this case, the CDA from its own past of shoddy record keeping.

It is not IESCO’s fault that the CDA overpaid, nor was it IESCO data that formed the basis of the overpayment, rather it was the CDA’s own. Instead, whoever at the CDA was kicking back his boots while the agency was bleeding money should be made to pay, be it through dismissal from service or other strong actions available to the FIA and the NAB. Unfortunately, almost all former CDA chiefs still in service happen to be federal secretaries.

So much for justice.