University: A haven for fashion, marriage, and entertainment 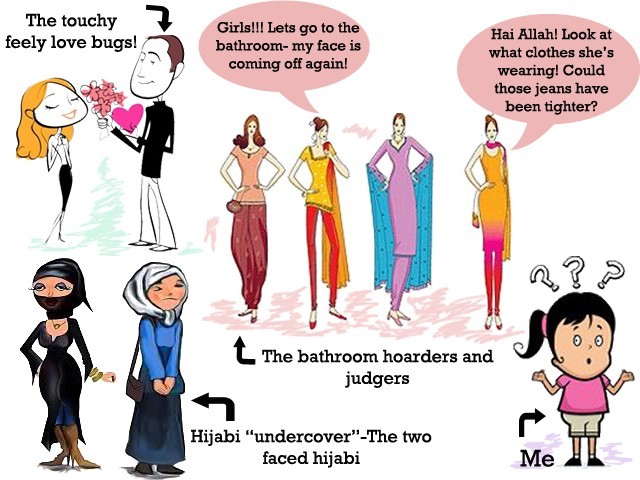 Although, I am still in my first semester and it might be too early to judge or draw conclusions, I am completely bewildered by these people. DESIGN: ERUM SHAIKH

They were right when they said that university can teach one some of best lessons in life.  In this place called a ‘university’, I have met people that I didn’t even think could possibly exist!

Although I am still in my first semester and it might be too early to draw conclusions, I am completely bewildered by the people I have been fortunate enough to have met. Having been swept off my feet, I would like to talk about a few of them:

The original concept of using the toilet has pretty much diminished. The bathroom is now considered a convenient dressing room.

Unfortunately, every time I have actually decided to use the toilet, I have been confronted with eager girls glued to the mirror, in attempts to fix their hair and apply lipstick on their already glossed lips.

To begin with, I just can’t comprehend how anyone can be so dressed up for an 8:00am class! What is even more surprising is that the same bunch of girls are seen heading towards the ladies room after every class; it’s the new hang out spot without a doubt.

Regrettably, all my classes are on the same floor as the bathroom.

We have all known some of these or been a part of these at some point in life – ‘the judgers’. Comprising mainly females, they believe they are better than the rest.

Their morals, values and ethics are not to be questioned. They decide who to pick on and there is nothing anyone can do about it! Their day is not complete without this activity of sneering, pointing and sniggering at some poor being.

So anyone wearing western clothing is immoral and unusual. The poor girl who decides to wear jeans is attacked by stares, marking disapproval of such clothing.

At the end, not only are you identified as “evil” due to your unacceptable attire but they will also spit the word ‘modern’ out at you, which naturally means you are immortal and a ganday character ki larki!

Within three months, there have already been three girls who have abandoned the university, followed by a dozen who do not wish to continue in the following year. A handful of them are engaged and a significant number are waiting for rishta aunties (proposals) to knock on their door.

So, not only are Monday mornings devoted to exchanging rishta stories but engaged girls take this opportunity to share their experiences, followed by their unsolicited advice.

Whether they get married or not is none of my concern. However, I do believe that they took away this opportunity to obtain a reputable degree from another potential candidate, who may have actually entered the job market.

I don’t see a point in attending university halfway or at all, if you don’t plan on graduating.

If you are from Defence, you are labelled a “burger” . There seems to be this divide between Defence and Clifton with the rest of the city.

People from Defence and Clifton are labelled ‘oblivious’. They are not considered to be part of Karachi and are assumed to be unaware of the country’s numerous problems. Conversations of loadshedding, CNG crisis, robbery and bomb scares do not apply to them. These things don’t apply to the people who live there.

The only conversation that can be carried out with this lot is about magnificent malls, fancy restaurants and women in western clothes.

A handful of women in my university cover their heads. Amongst these, some of them are not very sincere in their motives. They come wrapped up from home but by the time they reach the classrooms, their scarf is coyly sliding off their heads.

Some of these women even go to the bathroom and intentionally remove the scarves off their heads, flaunting their latest blow dry! What is even more surprising is that if you ever come across their Facebook pictures, they are wearing sleeveless and off-the-shoulder dresses!

I find this funny, but hey, to each their own!

Within the first month of studying in this university, I have seen many new couples emerging. I often wonder how they decide to implement this decision in such a short span of time. However, what particularly disturbs me about this whole situation is their ridiculous behaviour. They will completely isolate themselves, hide behind buildings and stick to each other like Siamese twins.

You’re in university, not in middle school. I understand they may not have the option of meeting otherwise, but still, if you walk with a distance wide enough for a bee to fly in between, it might just make it more comfortable for others sharing this public space with you!

These are the kinds of people I’ve come across so far and as I said earlier, this is just my first semester – and I suspect just the beginning. I’m sure I will be back with more details of the other eccentric people.

I am sorry Mr Policeman, you deserve better...