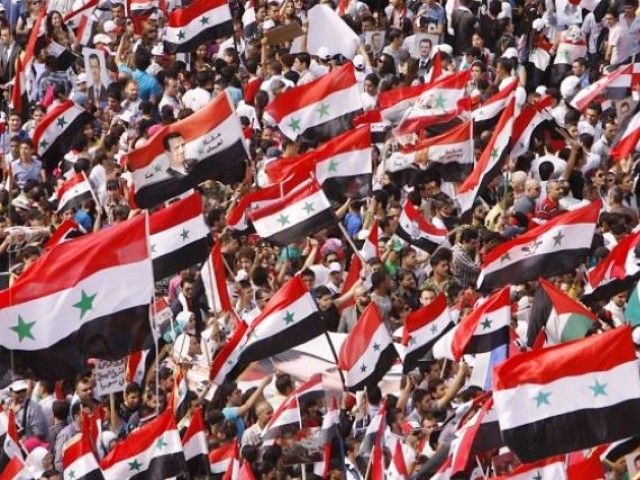 The civilian casualties by Syrian government could not be supported at any cost, but who is responsible for those human lives, who are the victims of the rebels’ bullets? PHOTO: AFP

In December 2010, a man in Tunisia self-immolated to protest against the treatment he received from the police. The incident served as a catalyst and what followed was an extraordinary year, which saw pro-democracy rebellions erupting across the Middle East.

The wave of popular unrest sweeping the Arab world came late to Syria, but since the first protests in March 2011 in the city of Deraa, at least 40,000 Syrians are thought to have been killed. It is difficult to see a clear winner emerging from the ever-bloodier civil war in Syria. After thousands of casualties, however, the question is,

Sectarian divides are a key factor in the Syrian conflict. The majority of Sunni states like Turkey, Saudi Arabia, and the Persian Gulf countries line up in support of the Syrian resistance, and Shiite-majority nations, such as Iran and Iraq, seek to bolster Assad’s hold on power.

The main opposition is the Syrian National Council – an umbrella group dominated by the country’s Sunni majority. The free Syrian Army formed as a group of army defectors intent on waging a violent insurgency to depose Assad. Armed rebellion, funded by Saudi Arabia, Qatar and Turkey are fighting against the Syrian government.

The regime of President Bashar al-Assad, himself from the Alawite offshoot of Shiite Islam, insists that it is fighting foreign-backed ‘terrorists’. As a Shiite Muslim president, Assad has established close ties with Iran and Hezbollah.

According to the United Nations, on average, over one hundred people, many of whom are civilians, died every day in Syria in the past 20 months. The UN also estimates, more than 400,000 refugees, and some 2.5 million Syrians are in need of humanitarian assistance, and more than half are children.

The majority of Arab rulers threw their support behind Syrians’ opposition. Saudi Arabia and Qatar are funding weapons to the Syrian armed militia who are fighting against the regime. Assad maintains that it is fighting ‘terrorists and armed gangs’ and that 6,947 people have died, including 2,566 security forces personnel. He also says that it is facing an international conspiracy seeking to destabilise the country.

The United States and European Union have placed a variety of sanctions on Syria. The United Kingdom is also helping Syrian rebels; this was criticised by Amnesty International.

United Kingdom campaign director Tim Hancock describes British Prime Minister David Cameron meeting Saudi King Abdullah as “disrespect”. It was both darkly funny and disappointing to read that the Saudi King was discussing human rights issues of Syria with David Cameron. The world is aware of the value of human rights in Saudi Arabia. The meeting resulted in David Cameron assuring his complete support to the Saudi king and promised that the UK will strengthen armed groups in Syria.

Some countries, such as Iran, Russia and China, showed support for Bashar al-Assad.

Both Russia and China have significant economic and military relations with Syria. As permanent members of the United Nations Security Council, the countries have vetoed three Western and Arab backed resolutions aimed at isolating the Assad regime. Iran, a long time Syrian ally, continues to have crucial links to the regime in Damascus. Tehran has provided Damascus with both military and much-needed economic assistance.

On the other hand, the Security Council is paralysed by deep divisions between the US, Britain and France on the one hand, and Russia and China on the other. NATO has categorically said that it will not contribute to a military intervention in Syria, nor will it provide assets to deliver humanitarian or medical assistance. NATO Secretary General Anders Fogh Rasmussen said,

“Syria is ethnically, politically, religiously much more complicated than Libya.”

So, UN approval for any kind of Libyan-style military action in Syria seems impossible. And consequently, action without a UN agreement looks equally improbable.

A few weeks ago, when Israel carried out attacks on Palestine, all Arab leaders were quick to voice their reservations against Israel and urged for a cease fire.

The important point to ponder upon is that they want peace in Palestine but not in Syria?

The Arab rulers’ double standards are robbing them of any credibility they had left. It seems like they are trading civilian blood to achieve their political goals. They are arming rebels in Syria to prolong civil war. They want the Syrian war to continue because it serves their narrow sectarian and nationalistic interests.

Can these policies be considered double standards of Arab rulers? Would it be wrong to conclude that these actions expose their hypocrisy and supremacist attitudes? The civilian casualties by Syrian government could not be supported at any cost, but who is responsible for those human lives, who are the victims of the rebels’ bullets? Saudi Arabia? Qatar? Turkey? Or the west?

The rulers of Saudi Arabia and Qatar insist that Bashar al-Assad should step down or be removed by force because the Syrian people want him gone. Yet, they ignore the fact that the Arab people want them all gone, not just Assad.

And what needs to be realised by these forces is that this spring will come to their kingdoms, too, and it might just arrive as a dead winter.

It's Israel who is the real super power, not the US