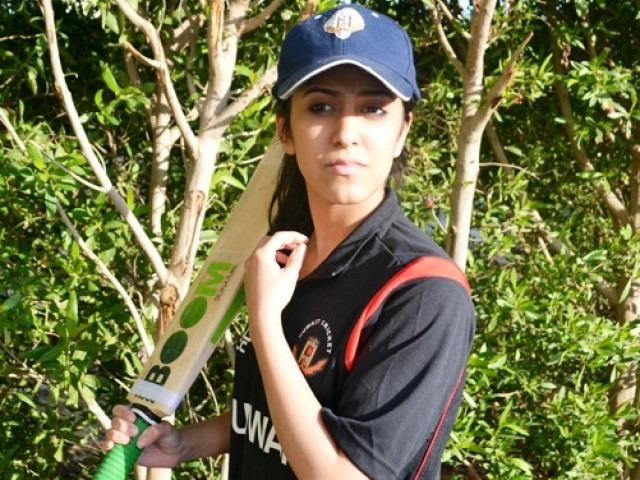 I am currently focusing on just Kuwait. However, my ultimate destiny is to wear a green cap and play for Pakistan. PHOTO: ROHA NADEEM

I am standing on the field, eyes glued to the ball that is coming towards me with an unusual scooting speed. ‘I can take it. That’s mine.’ I say to myself. I judge the ball and see my team-mates gleefully run towards me as the ball inescapably settles in my hands.

I roar triumphantly as I see the opposing batsman walk back towards the pavilion.

Oh cricket, how I love this game!

I was that typical Pakistani girl who grew up watching her father, uncles, cousins and friends enjoy cricket. However, it took me a good few years to get used to it.

It all boiled down to the inaugural T20 world cup that took place in 2007. The nation was whistling and humming as Pakistan made it to the finals. Although, I had pretty much no sense about the game then – being a patriot at heart, I was quite ecstatic myself. Having lost the final to India, the amount of buzz this tournament created nevertheless left me wondering how enjoyable this sport can actually be. That’s what gave rise to a cricket devotee inside me.

Through the years, I wholeheartedly changed myself into an avid cricket follower by watching cricket. I loved reading cricket books too and I believe they helped me understand cricket through a broader perspective. Cricket was all I did, see, watch, talk and read.

Being recklessly in love with the game, getting an opportunity to play for Kuwait was something I couldn’t shut my eyes upon. Yes, it came as a challenge, but I was ready for it.

To be quite honest, my family initially had no hopes of me excelling at the game. They were rather uncertain because of the tough physical demands of cricket training. Sitting at home and watching was one thing. Going on the field and playing was another.

On the other hand, my parents were specifically concerned about cricket affecting my studies in the long run. They made sure I gave all my devotion to school before anything else. For them, cricket stood second. They encouraged me throughout my trials and training, although, at the back of their minds they were somehow still reluctant about the whole thing. The most strenuous part of my journey was convincing my parents that I could do well at cricket.

Being a girl, the challenges doubled.

The training was way more fatiguing than I thought. I am not a morning person but when it came to cricket, I remember waking up at 4am for practice. Moreover, as the tournament came nearer, trainings in Ramadan brought out the most demandingly exhausting part of the job.

On the contrary, senior players in the team kept me motivated throughout. I remember spending some memorable yet mischievous moments with my team-mates both on and off the field. There were days when we used to skip practice and go partying instead, much to our coach’s annoyance!

Furthermore, I am greatly thankful to my coaches for bringing out the best in me through these months of practise. As a beginner, I felt under-confident at times. I was constantly doubting my place in the team and questioning, if I was able to play up to their expectations. But they had always been motivating and encouraging.

These are some of the most frequently asked questions that I encounter, when I tell people I am a female cricketer. They seem pretty amazed at the idea of ‘female cricketers’ and their level of amazement is doubled when they realise that I don’t carry the ‘tom-boy’ look that majority of female athletes do.

A major misinterpretation people hold about female cricketers is that they lose their feminine charm. I usually get that as well, as to how can I carry my ‘girly’ looks and play cricket at the same time? To which, I have no answers. I reckon it’s all about how one carries oneself.

On a lighter note, female cricketers can be good-looking too.

I have currently taken a short gap from professional cricket ahead of my academic engagements; however I look forward to resuming cricket next summer.

As I have been residing in Kuwait, I am currently focusing on just Kuwait. However, my ultimate destiny is to wear a green cap and play for Pakistan. On my Singapore tour in 2010, we played against some amazing women teams such as, Hong Kong, Bhutan, China and Singapore. The toughest team had to be Nepal. Their women team is nothing close to what their women look like!

Although, we lost some of the major games and were not able to qualify for the semis, I believe that tour was an excellent learning experience for me. It had by then, struck me that I needed to work way harder and make myself as fine as these women cricketers.

Talking of which, I greatly admire Sana Mir, the serving captain of the Pakistan Women cricket team and dream of playing under her someday.

For a girl my age, that’s quite a rare wish, but that’s what cricket does to you!