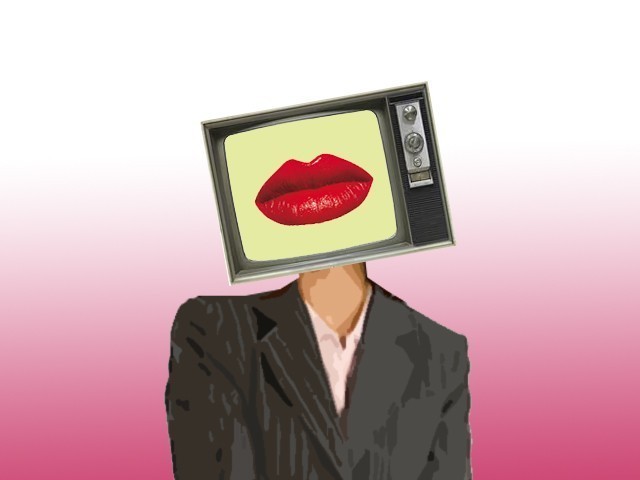 News channels should have their dress codes but the government should not dictate it. DESIGN: JAHANZAIB HAQUE

In a country plagued by many menaces – exploding sectarian violence, common man struggling for food, electricity and gas – the government has once again done an exceptional job of prioritising and combating the nation’s problems.

The National Assembly Standing Committee for Information and Broadcasting recently expressed their concerns over the danger of female news anchors not wearing dupattas on air.

“Journalists are in trouble and we are ready to provide them with complete security.”

I’m all for journalists’ rights and protection but I highly doubt a dupatta would act like a shield or a bulletproof vest. If people actually went over the edge and started killing news anchors for displaying their hair on TV, then they wouldn’t stop at these women only and we would actually have a real problem on our hands.

If head covering is implemented then that would only encourage fundamentalism, which as we know is always lurking in the shadows of our society, waiting to be stirred into madness by an idiocy such as this.

Now I want to try and understand the motive behind the aforementioned statement, and it boils down to two plausible directions- cultural and religious. It was further stated that the local culture should be promoted by the media, as the country is rich in heritage.

I have to say, I agree with the very wise statement made by our information minister- Pakistan does indeed have incredible heritage which should be maintained and encouraged.

But I would like to question how the ‘rich heritage’ and ‘culture’ of this country seems to only amalgamate in the female faction of the society?

Are men not deemed worthy enough of acting as representatives of our culture?

If it really is culture that we are trying so hard to protect and promote, then why not adorn our lovely male news anchors in shalwar kurtas as well? Moreover, how about the current state of our tangible heritage? What about our ancient landmarks and historical sites that are, slowly but very surely, dying from old age and neglect?

But no, first we have to make sure that these news anchors cover their heads because that obviously poses more of a threat to a culture that is allegedly slipping out of our hands!

Looking at it from a religious perspective, this recent news wailed the warning sirens of the Zia era. Before proponents of Zia roll up their sleeves and come after me with stakes, this is not a bashing of Zia’s governance; all I want to point out is that forcing the news anchors to cover their heads back then did nothing to help the situation of the country or its culture, so I highly doubt its implementation again would serve any purpose.

The only problem with this step being taken is the fact that it will only act as a stepping-stone towards such declarations and enforcements being made.

First you cover the heads of the newscasters, then what?

Next you’d be telling them to read the news with their gaze lowered as some man sitting watching it on his television might be driven to vile temptations by the overtly illicit eyeballs staring at his soul through the screen?

However, modesty does not come from a dupatta or hiding every strand of hair that exists on a woman’s head.

A woman could look perfectly modest without her head being covered. If those who look at it from a religious angle and believe that Islam dictates that a woman should cover her head, why drag your religion into the media? Media that is meant to be independent of any religious or governmental affiliations.

A government that can dictate the compulsion of covering one’s head will surely not stop at that. If a woman wants to wear a dupatta according to her free will, she should be allowed to do so and if one doesn’t believe in the notion, then she should not be made to do that just because her face is being broadcasted on national television.

News channels should have their dress codes but the government should not dictate it. That is a boundary that is getting overstepped and people chanting the pro-modesty-through-dupatta mantra should realise that.

The news watchers have an assortment of channels, ranging from mujhra dancing to the Islamic ones, which is highly representative of our current national mindset-highly confused and layered with hypocrisy. There are plenty of channels promoting our culture and there are plenty that may be tarnishing it too, but that is where the power of the remote control comes in and it’s your ticket to free will. Use it if you feel what you watch is offensive, even if it is a woman who has the audacity to leave her hair loose for everyone to lust on.

The government may use such issues to steer away from the actual problems, but it’s more saddening when the public falls prey to manipulation and believes these meaningless gestures can add value to our deep-rooted, bigger crises.