Learning from US electoral experience 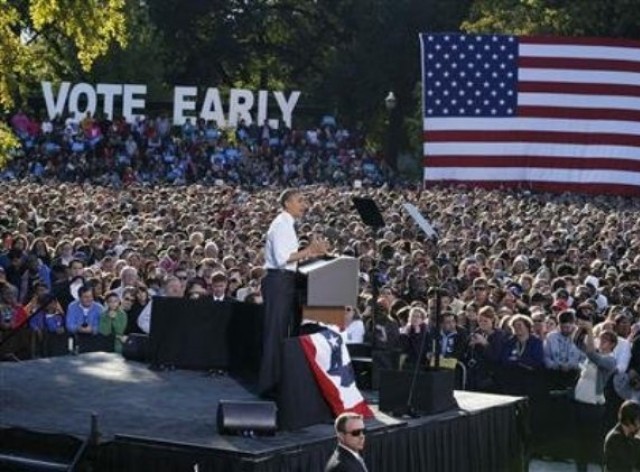 We should replicate the US system if the government wants to get the desired results with minimum chances of rigging and other issues. PHOTO:REUTERS

Spending three weeks in the most important swing state of the Unites States — Ohio — and observing the recently-held presidential election campaign was a golden opportunity for me as I got to study how different the US election is from our own. The month was as important for candidates as it was for the voters.

To voters, the election was not merely about voting but about electing a president for the next four years that would redress a number of their national issues such as job opportunities, health care and social security.

The greatest thing I observed that is rarely practised in our country was the revelation of the policies and future plans of the two presidential candidates.

In his last leg of electioneering, President Barack Obama in Cleveland, Ohio said “don’t vote for me because of what I have done for you in my past four-year tenure but vote me for what I am going to do for you in the upcoming reign”.

He spoke clearly on all his policies before the people and asked them to choose who they thought would be a suitable person to change their future.

The general election is also approaching in Pakistan and aspirants for the assembly seats are all set to woo voters by delivering heart touching and emotional speeches during their campaigns. Their manifestos mostly enshrine slogans for nationalism, politicking on their martyred leaders and holding the previous government responsible for failures.

Over time, we have been deceived on these hollow slogans and empty promises. However, the onus of an incompetent government can’t only be put on the rulers; voters are squarely responsible for a failed and successful government.

Candidates should announce public-centric policies and also hold debates like the Republicans and Democrats in the US, in order to earn people’s votes based on the clarity of their visions.

The early voting system in the US also gives a better opportunity to everyone living inside and outside the country to cast their votes. We should replicate the US system if the government wants to get the desired results with minimum chances of rigging and other issues.

A Reporter for the Peshawar Bureau at The Express Tribune.