Palestine: The audacity to hope 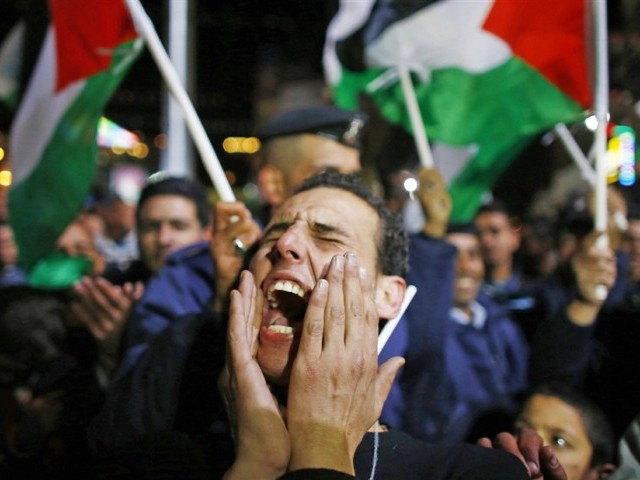 After over a decade of sacrifice, struggle, loss of life, loss of land, constant war and international seclusion, Palestine was finally recognised by the UN as a state. PHOTO: REUTERS

I remember an evening in November, 2011. I was sitting at a meeting of the Model United Nations Society at the University of Westminster on Regent Street in London. While the society had always been my favourite extra-curricular activity at university, as I sat their waiting for the proceedings to start, I was feeling very depressed.

In the course of studying International Relations, realism — the notion that world is driven solely on basis of self interest — is one of the first theories taught. But when the United Nations Security Council (UNSC) rejected the Palestinian bid to gain recognition as a member state, I felt that the past three years of my life had been a waste.

Almost all the faith I had in the United Nations (UN) had evaporated, leaving behind cynicism at the prevalent status quo and the unlikelihood of it ever being changed.

As I sat there, I remember the then president of the society, Rizwan Amin, walking to the podium and saying a line which has held huge meaning for me ever since:

“A journey of a thousand miles begins with a single step.”

Rizwan was quoting the words of the ancient Chinese philosopher Lao-tzu and in doing so; he made me realise the entire worth of the UN in particular and diplomacy in general.

After over a decade of sacrifice, struggle, loss of life, loss of land, constant war and international seclusion, Palestine was finally recognised by the UN as a state by an overwhelming majority of the world.

The vote grants Palestine a ‘non-member observer state’ status, which is an upgrade from its former ‘non-member observer entity’ role. The promotion would mean that representatives from Palestine can now take part in the General Assembly discussion, join various UN agencies including the International Criminal Court, and rally the Palestinian cause with a much stronger diplomatic standing.

Even more significantly, the recognition of Palestine as a state gives those suffering there something much more than a birth certificate…it gives them hope.

The historic vote came 65 years to the day after the UN General Assembly voted in 1947 to divide the British Mandate for Palestine into two states — one for Jews and one for Arabs. Israel became a state but the Palestinians rejected the partition plan.

Out of the 193 member states of the UN, 71.5 per cent voted in favour of recognising a Palestinian state while only nine members voted against it.

The tremendous support that Palestine was able to gather crushes every theory of realism in the textbooks. Palestine is not a major trading partner with any country; it does not hold particularly rich resources which can be exploited, its geographical location is of no greater significance than that of its neighbours. The world simply voted for the sake of justice and for the sake of peace. Palestine won its bid through sheer diplomacy and human sympathy.

The only platform which allows this to happen is the United Nations.

I know a lot of people who deride the UN as tool of the powerful and not useful in bringing about real change. The veto power that five permanent members of the Security Council have can make it seem like that. But the General Assembly on this case proved that the organisation does have the capacity to showcase the entire world’s opinion.

After even 65 years, they still dare to hope.

Besides, as Rizwan said:

“A journey of a thousand miles begins with a single step…”

A freelance journalist currently pursuing a Masters degree from the University of Pittsburgh's Graduate School of Public and International Affairs specialising in International Political Economy. He tweets @asifhasansheikh (twitter.com/asifhasansheikh)

The rise of the rupee: A politically potent economical stupidity

Election day tips: Be prepared, there is no separate line for the rich

Reporting on Gaza is about keeping the viewers at peace