I am blind, not disgusting 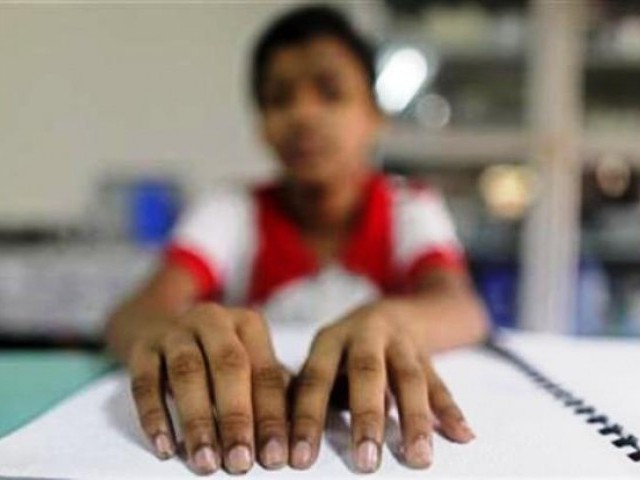 When I entered that classroom, I had no idea; I was just as blind as these students. PHOTO: REUTERS

His name was Hamza and he wasn’t born blind. He was the only son amongst five daughters and was not very well off.

A cricket ball plunged to the back of his neck took away his eyesight but was not able to take away his desire to learn. He had a beautifully haunting yet a wise way of looking at the world and accepting it.

I was assigned as his teacher during an internship at the Ida Rieu School for Deaf and Blind in my final year of undergraduate school. He was placed in the special class, where students who weren’t born blind but had lost their eyesight as a result of some illness or accident, studied.

When I entered that classroom, I had no idea that I was just as blind as these students.

I didn’t know my life was about to change drastically. I did not know that the little boy, who lost his eyesight at the age of ten, would be the cause of this change.

I sat next to him and helped him practise his Braille, pushing him to try and understand the difficult technicalities of the Braille alphabet. We slipped into our roles of a teacher and a student and he was perfect, accepting criticism and pushing himself to work harder.

At the end of the day, we both congratulated ourselves for learning something new. Him, the Braille alphabet and me, the patience to teach, listen and teach again.

One day, when the bell rang at the end of the school day, Hamza stopped me before I could reach for my bag.

I agreed and helped him with his bag. When we started to move towards the door, I automatically stood in front of him and offered my elbow to him to grasp so that I could safely lead the way without him bumping into things.

I was confused. I asked him what he meant.

(You will have a problem. I will come myself)

I assured him that it was no problem at all and he hesitantly grasped my arm just above the elbow. We carefully made our way down the stairs to the parking lot where the student’s vans were parked.

I asked him the number of his van and the driver’s name. After ten minutes of futile search he said maybe the driver is running late.

(You can go; someone will seat me in the van)

I told him not to be ridiculous and helped him sit on a bench and we both waited for his van to come.

(Miss if you don’t mind, can I say something?)

I told him to go ahead and speak his mind.

I was so shocked that I didn’t know what to say.

Hamza smiled as if he could read my expression and said,

(Miss why are you so shocked? I am used to it. The lucky people think of us as untouchables.)

I couldn’t help it. I reached out and grasped his hand. I choked on my words but somehow managed to swallow the hard lump in my throat and tell him that it was them who were the unlucky ones.

I looked around, desperately looking for something to say or do to make him feel better. I spotted a man who was selling corn kernels near the van. I asked Hamza if he would like some.

(Yes miss, but my mother has given me money. Please don’t embarrass me. I want to buy them myself.)

I realised that Hamza, like every special person I have ever come across, desperately wanted to be treated normally. I agreed and we walked over to the corn seller.

I asked him for two packets of corn kernels worth Rs10 each.

When I opened my bag to take out the money, I noticed the look of distaste on the man’s face as he almost threw the packets at Hamza. He quickly retracted his hand and wiped it on his clothes.

I was outraged and asked him the meaning of his behaviour.

(Sister forgive me, but I don’t like touching blind people.)

He said this with Hamza standing right there, hand outstretched to pay for the corn kernels.

I was so angry that I took my packet and returned it to the man, fixing him with an icy stare I said,

(May God forgive you!)

I handed Hamza his corn kernels and we walked back to the bench.

We sat in silence as Hamza ate the corn.

(Miss please don’t be angry. He gave me Rs10 worth of corn today, usually he gives me a packet worth Rs5 and tells me to go away.)

I was so upset I didn’t know what to say or how to respond.

(Miss I love candy floss and they sell it outside the school but the man who sells it doesn’t even like to talk to us.)

I silently thought to myself, in amazement, about the kind of people that lived in this world, even educated people like Hamza’s teachers didn’t allow him to touch them. What use was their education to them?

After helping Hamza safely on to his van, I noticed the van driver shouting at the other blind children getting on board and occasionally calling them names when they couldn’t find a place to sit.

It depressed me to no end to see these children, who have already lost so much, to be treated like this by people around them, just because they weren’t as perfect or normal.

I silently prayed for forgiveness, for these ignorant and heartless people, who didn’t realise that if God had the kindness to bless them, He also had the power to take it away whenever He wanted.

From that day onwards, I made a conscious effort to thank Allah (SWT) for all He had blessed me with and to apologise for being so blind, ignorant and thankless.

We are the lucky ones, for God has given us the sense to see His miracles, the tongue to thank Him for it, and the ability to appreciate them.

Ironically, it took a 12-year-old blind child for me to see it.

My brother has Down Syndrome, not a contagious disease