‘Objectivity’ the first casualty in the Gaza conflict 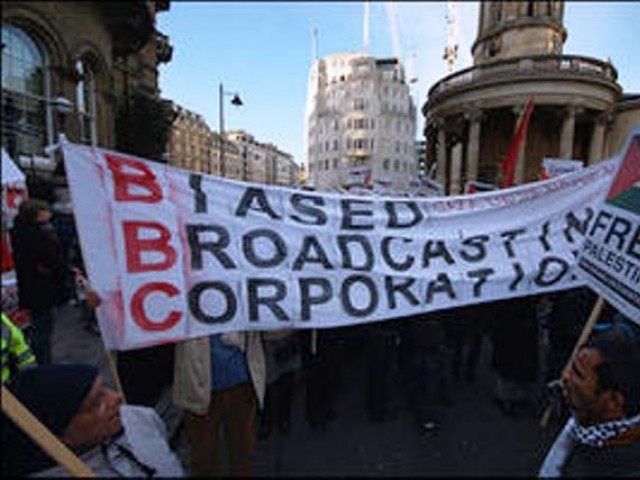 The choice of words in BBC newscasts reinforces the pro-Israeli perspective; Palestinians are described as terrorists but Israelis who tried to bomb a Palestinian school were described as vigilantes. PHOTO: INDYMEDIA.ORG.UK

A fragile truce is in place in Gaza and now begins the battle of interpretation of who was to blame and who was hurt most. Israel’s eight day war on Gaza was accompanied by a war of words, with the Israeli Defence Force (IDF) sending out a barrage of propaganda that was uncritically picked up and repeated by most of the world’s media.

Information from the communications branch of the IDF flooded the internet with the IDF’s own blog full of updates and infographics, also featured on their Twitter, Facebook, Instagram and Tumblr accounts. The infamous IDF video on YouTube showing the destruction of the car carrying leader of the Hamas military wing, Ahmad Jabari, was briefly removed but then reinstated.  The use of social media – to show graphic and violent images and to dispel biased information – calls into question, once again, the responsibilities of social networks towards individuals, governments and armies. So much is allowed by freedom of speech, that ‘freedom’ has become wanton license and objectivity is looking like a lost cause.

For many years now, the reporting of the Israeli-Palestine conflict has been noted for its biased language and competing information. Journalists have until recently been seen to have a duty to present the objective facts to inform and explain, but television news has changed all that by reporting in sensational sound bites and short partial accounts that leave no room for balanced discussion.

Over the years it has been noted that viewers are really confused about the origins of the Israeli-Palestine conflict.  For example, in one research group, over 90% of people had no idea that access to water was a vital element in the conflict. The Glasgow University Media Group Study in 2004 found that journalists were being told to concentrate on hot live action and not to give explanations so it is hardly surprising that there is a basic lack of understanding about who the settlers are and who the occupiers are, who are the aggressors and who the oppressed.

According to Greg Philo, co-author of Bad News From Israel;

“There are very distinct and different perspectives on this conflict which should be represented on the news. The Israeli authorities and much of the Israeli population see the issue in terms of their own security and indeed the survival of the state in the face of threats from terrorists and hostile neighbours.”

Israeli military actions are presented as retaliation to attacks and in contrast the Palestinians in Gaza see themselves as resisting or responding to brutal military action by people trying to deny them their own land and state. The BBC has usually been the example of in-depth objective news reporting, but it too has fallen into the sound-bite trap and all too often shows a strong preference for Israeli perspectives. This is even more obvious in the US where politicians who support Israel are twice as likely to be interviewed on television and present Palestinians as initiating trouble and violence, forcing the Israelis to respond or retaliate.

The choice of words in BBC newscasts reinforces the pro-Israeli perspective; Palestinians are described as terrorists but Israelis who tried to bomb a Palestinian school were described as vigilantes. Words such as mass murder, atrocities, brutal murder were used to describe the deaths of Israelis but not of Palestinians. The ongoing Israeli attacks on Gaza are described in BBC reports as a “defensive policy manoeuvre” and the possibility of a ground invasion was described in terms of “a major Israeli engagement” or “a violent escalation that neither side can control.”

Now that the truce has been mediated by Egypt and seems to be holding (November 26, 2012) the grim accounting has begun. The IDF has announced statistics on Israeli casualties, which the military put at five killed and 240 injured. However, a Mondoweiss correspondent notes that, “Gaza rockets have produced so few casualties that in the absence of deaths and serious injuries, Israeli authorities have resorted to detailing how many people were “treated for shock”.

With elections in Israel just weeks away, no doubt the IDF wanted the casualty list to be more impressive to add to its other reckoning:

With the Palestinians suffering more than 96% of civilian casualties, it is appalling to consider that the IDF might wish to inflate its own civilian casualty numbers to try to counter the distasteful image of disproportionate overkill.

Truth has always been noted as a casualty of war, but in this case the propaganda has become grotesque. With such biased terminology confusing TV viewers, it is no wonder that a common reaction is to turn away from current reporting, and as Greg Philo says,

“This has the very damaging effect of limiting any serious public debate about how the conflict might be ended.”

This can only compound the tragedy for the people of Gaza.