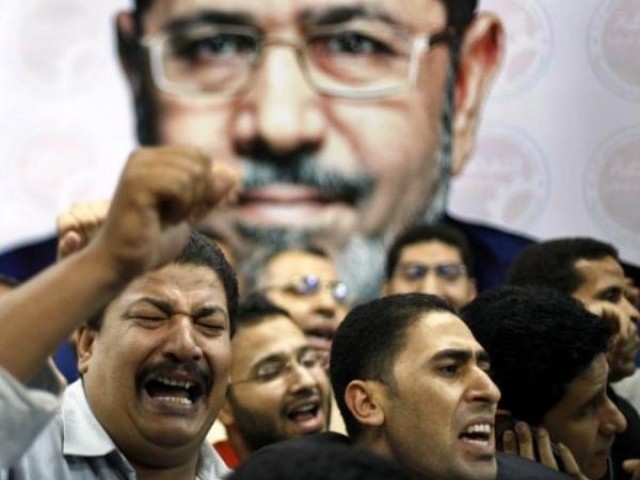 It is the common Egyptian on the street protesting against the decree because he sees it as a return of the Mubarak era. PHOTO: REUTERS

Last Thursday, Egypt’s President Mohammed Morsi stupefied the Egyptian public Islamist allies and opposition alike with his new decree granting him sweeping powers that practically make him immune to judicial decisions and gives him near absolute power in constitutional matters.

At the time of writing, Egypt is roiling with mass pro democracy protests that are spreading with the passing of each day. On November 27, 2012, almost 100,000 protesters flocked to Egypt’s iconic Tahrir Square to protest against Morsi’s new decree, which they call a ‘power grab’ and led the Nobel Laureate Opposition leader, Al Baradei to pronounce Morsi as Egypt’s New Pharaoh. The protest sit-in at Tahrir Square still continues.

The decree gives President Morsi the power to proclaim any new law without any hindrance and no challenge could be made to his decisions, not even in the Supreme Court! He also actively banned the judiciary from dissolving the Shura Council (i.e. the Upper House of the Parliament). This has been viewed as a defensive strategy by Morsi to protect the Shura Council from any judicial decisions, seeing that the Supreme Court already dissolved the lower house of Parliament on the premise, that the elections were held on rules that were in contrast to the country’s constitution. That decision pitched Morsi against the judiciary that has remain unchanged since Mubarak’s reign ended in 2011.

Morsi’s new decree also immunises his decisions on “National Sovereignty” from any judicial review until a new assembly is elected early next year. Now what those issues of national sovereignty are, no one from the Morsi camp has been able to satisfactorily explain to the world at large. Most probably, the issues of national sovereignty pertain to his decisions on foreign and domestic affairs like imposition of martial law, severing diplomatic ties with nations and dismissing the cabinet.

He also gives himself the power to tackle any challenge by issuing uncontested decisions to protect any state institutions from performing their functions. This has been interpreted to mean that the president has given himself extensive standby emergency powers, should such a situation arise.

Needless to say, this new decree raised more than just eyebrows. Egypt is up in protest, and this protest seems to have united the hitherto divided and diffused opposition. Although it is the common Egyptian on the street protesting against the decree because he sees it as a return of the Mubarak era and the judiciary, who see it as a blow to their authority,  it is very interesting to note that the protest camp has also seen former military men join the anti-Morsi demonstrations.

In an interesting article in the Washington Post, it has been reported that the mass protests are also being used by anti-Muslim brotherhood elements, notably the liberals, secularists and Mubarak era military officers, to topple Morsi’s Islamist regime. It is important to bear in mind that Morsi faces opposition from the Coptic Church and secularists who claim that the brotherhood dominated constitutional panel does not reflect the pluralistic identity of Egypt. This reason exactly has led to a standoff between Mosri and the opposition (now aided by the judiciary).

From the view point of Morsi, we must remember that from day one, he has been on a quest against ousting Mubarak era officials from any positions of power. So far he has been generally successful since he has effectively sidelined the military officials from interfering in important political decisions. He also removed the Mubarak era prosecutor general, Abdel Maguid Mehmoud, who had infuriated Egyptian revolutionaries, by playing an important role in the acquittal of the Mubarak era officials who were allegedly involved in violent crackdowns against anti-Mubarak protesters.

The implementation of the new constitution, which is the real bone of contention, is the reason given by Mosri for adopting these new powers; which he promises to abandon when the new constitution is passed and the assembly is functioning normally. However, given the fact that Egypt has changed significantly since Mubarak it would have been a fairly large oversight, by President Morsi, if he assumed these powers for himself. In my view, President Morsi granted himself these powers so that the judiciary, with which he has been at loggerheads since the start of his term, does not hinder the implementation of the new constitution.

Despite the allegations by liberals and the church leaders, that Morsi is trying to pave the way for Salafists to come into power, it is worth noting that Morsi has proved to be, so far, not the demon that the western analysts predicted. In fact, his relations with the US have improved since he brokered a ceasefire between Israel and Gaza much to the consternation of Islamist and Jewish right-wingers. It remains to be seen how big a role the US plays in this ongoing drama seeing that ice between the Morsi led government and the US has just started to melt. The White House, given its apparent cold-shouldering of the Islamist regime, has stopped short of denouncing the decree and called for a peaceful solution of the issue.

How this new constitution will shape shape Egypt and play its role in the Middle East is something we will just have to wait and see. At the end of the day, it is a battle between the Islamists and secular opposition for which a solution is extremely pertinent as the success of the Arab-spring depends on how Morsi lets democracy flourish in a post Mubarak Egypt.