They are differently abled, not disabled 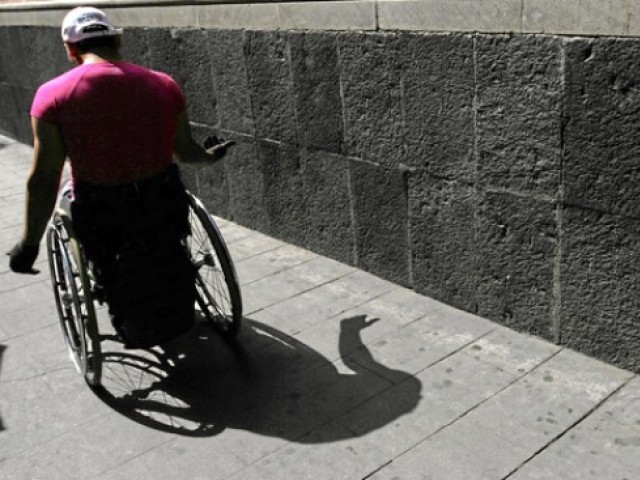 When you’re constructing a staircase in a public building, you’re not thinking of it as a special concession for people with legs. But when we’re building ramps, we think of it as a form of charity. PHOTO: REUTERS

Who among us has stopped at a red light in the inner city and not been visually assaulted by a dozen individuals with gross physical abnormalities walking, limping, crawling and rolling towards our cars?

What we’re observing is not necessarily poverty, but ‘ableism’.

‘Ableism’ is a belief that only those with a certain set of physical and mental attributes may be counted as a normal part of the society. Those lacking such attributes must either hustle to fit into a non-compliant society, or remove themselves from the mainstream entirely.

One of the most heart-rending sights you may come across is that of a gentleman in a wheelchair hanging around awkwardly at the bottom of a staircase at a government office. He looks around helplessly, waiting for somebody to pick him up – like an infant – and carry him up the obstacle course than an ‘ableistic society’ has gifted him. The staircase, to him, screams that he’s not part of the normal system, but an outsider. The onus is on him to find a way to deal with this existing system, usually by becoming dependent on the ‘normal’ individuals.

It is not the society’s burden to accommodate him into this setup.

If the message you derive from this is that we need to be kinder and more sympathetic towards the disabled individuals, then that’s the wrong way to go about it. The objective is to create a system that views these people not as disabled or dysfunctional anomalies, but as regular people with different needs than ours.

A fine example of ‘ableism’ at play is the widespread use of the slur ‘retard’. Traditionally, the term ‘retardation’ has been used to describe people with mental disabilities. By using the word interchangeably with ‘stupid’ in general conversation, we’ve equated a legitimate disability with ‘stupidity’, or any other epithet or curse of this nature.

When you’re constructing a staircase in a public building, you’re not thinking of it as a special concession for people with legs. It’s not the product of your boundless magnanimity, but something fairly normal that people need. But when we’re building ramps, we think of it as a form of charity.

People sometimes argue that in Pakistan, considering the miniscule proportion of disabled individuals, it’s too inconvenient or economically unfeasible to allow wide-scale construction of ramps and elevators for paraplegics, tactile paving for the blind, or regularise the use of sign language interpreters in public speeches.

About 2.5% of the people in Pakistan are classified as PWD’s (Persons with Disabilities) of whom 60% have physical or visual impairments. The reason you don’t get to see a lot of these people every day is because they mostly remain indoors, being taken care of by their families.

In a country where albeism holds sway, these citizens are forced to retreat from the mainstream society. Despite having the potential of becoming normal, functional citizens, they instead become a burden upon their loved ones.

Why ‘normal’, you may ask, when they’re obviously abnormal anatomically, physiologically or psychologically? Whenever you take a random sample of 1000 Pakistanis, about 25 of them would always be PWD’s. This means that their occurrence is a normal phenomenon in a social sense, even if their individual conditions are anomalous.

The projects being carried out by the Special Talent Exchange Program (STEP) and UNESCO do not serve as charities, but as prudent investments aimed at revitalising a good chunk of the population that has been unnecessarily made useless. Not only can we improve the lives of the differently-abled and their families, we can empower them to play an active role in nation-building.