Windows Live messenger is soon to be dead 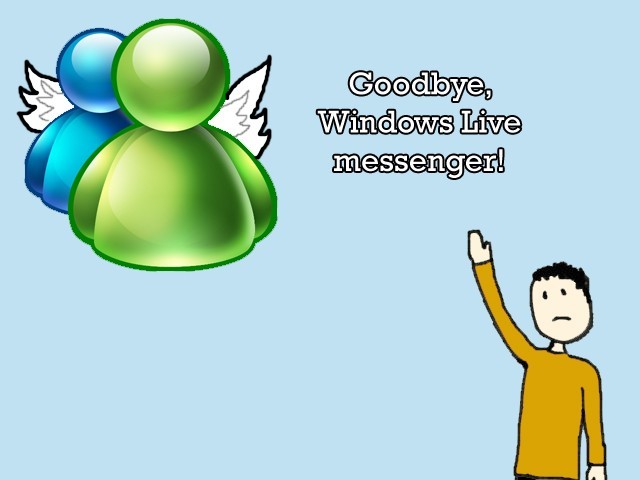 Ah, we do hate endings don’t we?

The feeling that I had when I heard the news can perfectly be painted by this quote.

“The leaves of memory seemed to make a mournful rustling in the dark.” (The Fire of Driftwood)

Tony Blates, the President of Microsoft, explained that in favour of its Skype division, and to optimise the server costs of running such instant messaging (IM) systems, Microsoft has decided to shut down Windows Live Messenger world over in the first quarter of 2013, except in mainland China.

Some of the executives at Microsoft are explaining that Skype is currently the best way to have video and voice calls in addition to its IM capabilities. The team at Microsoft has been trying to switch and merge Windows Live and Skype users.

A few weeks ago Skype 6.0 was released. One can log on to this portal with their Windows Live account and contacts from here can be imported as well. The Skype application that is available also prompts to merge the two; this was in continuation with the plan to shut it down.

It is expected that Microsoft may start giving an incentive to its customers to migrate their accounts with Skype, such as free Skype credits.

Only time will tell!

I’d love to have some free Skype credits, by the way.

One thing is for sure, we will surely miss the Windows Live messenger. Some of us were addicted to it. But, alas, times change and we’ll have to change with them and adapt to the new, much as we would hate to do so.

There were times when instant messaging was very popular. Some of us would set timings to go online and chat with our friends. This was so effective that major players like AOL, Yahoo and ICQ, all jumped onto the IM bandwagon and tried to increase their users by providing the IM service as well.

Since advertising is a major part of these IM services, this step boosted their earnings immensely. However, the king remained unshaken ─ Windows Live messenger (known as MSN messenger earlier) was the hot favourite.

With around 300 million users worldwide, there was no match for Windows Live, but with the advent of social media networking, it faced a sharp decline. This portal currently has only 180 million users.

There was no other way to contact and chat with someone online back then, unlike today when we have several options ─ Facebook, Twitter and tonnes of other online communication facilities.

There will always be a huge chunk of nostalgia associated with Windows Live messenger. I still remember people asking each other what their MSN ID’s were, so that they could catch up later. Lists were managed so that people could be categorised accordingly on one’s Windows Live account. It was the full package back then, and many friendships blossomed this way.

Goodbye, Windows Live messenger; we were an entire generation you served so faithfully.

Thank you for making my childhood so much better and exciting!

You will be missed!

A born marketeer and strategist, Zeeshan loves to write about and discuss technology, archaeology and science. He tweets as @XeeSheikh twitter.com/XeeSheikh