The point of snap checking 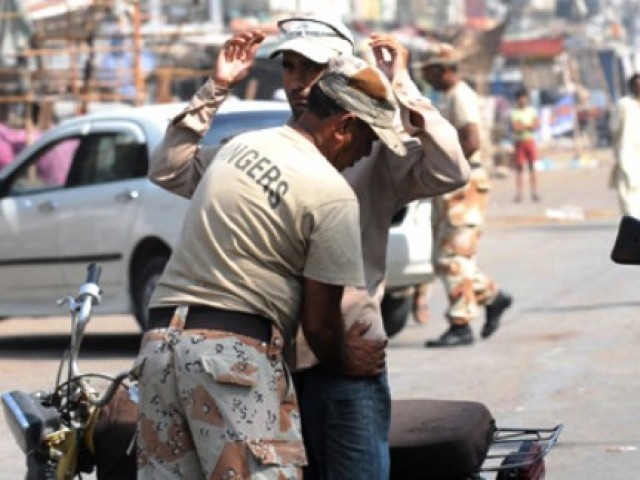 It never crossed my mind that they would stop our vehicle as we were not speeding or breaking any other law that I was aware of. PHOTO: AFP

On the eve of Muharram, a colleague and I were on our way home in a company car. We had just passed a bakery in Gulistan-e-Jauhar, Karachi when we noticed multiple security vehicles parked along the side of the road. About 10 officers were randomly motioning vehicles to pull over.

It never crossed my mind that they would stop our vehicle as we were not speeding or breaking any other law that I was aware of. Our vehicle also bore, quite distinctly, the name of our media organisation. But then one policeman directed us to pull over and exit the vehicle. While we were still recovering from the blatant hit on our rather inflated self-esteem, other personnel gave us an old-fashioned pat down.

As a policeman started interrogating our driver, we asked a Rangers officer nearby about the reason they stopped us. Your van has tinted windows, was the reply. Shortly afterwards, our driver was seen plucking pieces of black plastic sheet, a cheaper alternative to using actual dark-coloured glasses, from the front, rear and side windows.

I ventured that the vehicle belonged to a media organisation and transports expensive equipment so the tinted windows were, perhaps, intended to keep them safe from prying eyes. The officer calmly replied that his ‘higher ups’ had ordered that no vehicle without a permit was allowed to drive with tinted windows. When I asked him if such an inspection drive was being carried out in areas like Clifton and the Defence Housing Authority, which are home to a majority of those ‘higher ups,’ the officers replied that they were. After about 10 minutes, we were on our way again.

Should security personnel be criticised when they are seemingly doing their job?

But I recall seeing political leaders of three major parties in Sindh claiming on live television that they have lists of criminals belonging to the drug mafia, land grabbing mafia and every other kind of mafia.

I wonder why these politicians wouldn’t just share those lists with law enforcers for their time and energy would be better spent going after known culprits than ‘snap checking’ students, families and others who are least likely to be involved in anti-state activities.

But maybe the officers didn’t trust us and thought that two journalists were going to lob hand grenades at the nearest Rangers post.

We never found out.

A sub-editor for the Karachi pages at The Express Tribune.

Aren't we already a 'state sponsor of terrorism'?

TTP: Can we reverse the plague of extremism?