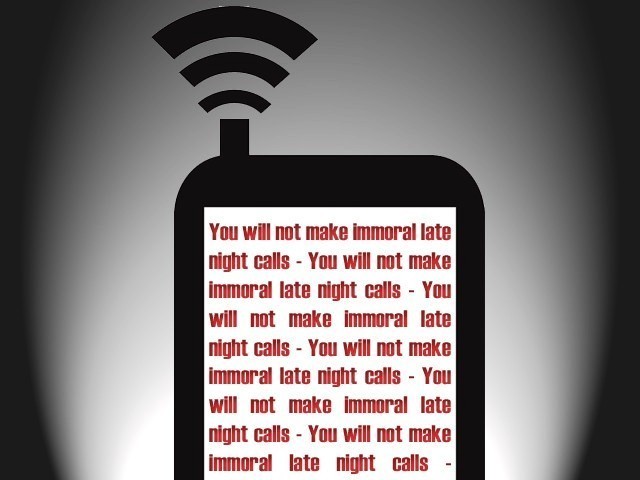 These packages have had a lot to do in creating a nation of Laila’s and Majnu’s. DESIGN: JAHANZAIB HAQUE

There is certainly something exciting about huddling under the covers and chatting late into the night with someone you find relatively interesting. But, as it is with most thrilling activities, there was more bad coming out from it than good.

Introduced several years ago, late night cell phone packages threw the entertainment starved youth of Pakistan into a frenzy. After a regular day of studies or work, users (a great portion of which were youngsters) looked forward to a night of chatting away with their significant others – and possibly some spare wheels as well.

It was an offer too good to resist; an incentive to chat all night with a member of the opposite gender.

As more and more cell phone companies competed with each other to lure users with the best deal, more and more youngsters felt that they were missing out on the time of their life and so, even those who, (at first) weren’t too keen on the idea began jumping onto the late night chatting bandwagon.

But to what avail?

There was certainly no good coming out of these packages.

Relationships were being severed and broken off. Cheating and infidelity was given a whole new meaning. When Soha* finally started her house job at a busy government hospital, her fiancé missed their late night talks and sought out another chat friend. After several months of late night sessions, which Soha was unaware of, he fell in love with the new companion and the engagement was broken off.

Where at one hand, romance would be blooming under the covers for a pair of love birds, on the other hand, single people were beginning to feel neglected. As Sarah* who lives in a dorm in Islamabad says,

“My roommate would chat all night with her boyfriend, but I had no one and it made me frustrated and perhaps gave me a slight complex. Besides that, her hushed whispers would infuriate and disturb me.”

Desperate males, which our nation has no shortage of, would seek girls on social networking sites who they could chat with at night; this was often translated into harassment.

Ah, but the late night romance had a downside too! The same late nighters would be rubbing their eyes in the morning and sleeping in their respective classrooms and workplaces. Studies and the quality of work invariably suffered.

Apart from troubled relationships, we haven’t heard enough times how cell phones are dangerous for our health. According to Em Watch;

“We don’t have to rely on common sense alone. Scientific evidence is also mounting. Frequent cell phone users are more likely to get sick than other people, and doctors, scientists and health researchers are trying to tell us about it. Almost every month, new research studies are published on cell phone radiation dangers. Recently published reports indicate that cell phone radiation is responsible in some degree for health challenges such as:

And all these things affect those people who make frequent or extended use of cell phones.”

In the daytime, people have several things on their plate and use cell phones for shorter interactions while in the night, with most tasks out of their way, cell phone activity goes on in full swing.

These packages have had a lot to do in creating a nation of Laila’s and Majnu’s and you don’t need to look further from the Facebook accounts of our youngsters. Take a walk on Facebook and at every turn and corner, you’ll find nothing but cover photos of sad poetry, lovers holding hands, weeping faces – and every youth wailing about the biggest problem in their life – having lost love.

All in all, these packages were benefiting no one except allowing youngsters to indulge in aimless and idle talk:

(What did you eat for food today?)

And similar discussion which would most likely foray onto something along the lines of,

(What are you wearing?)

Leading obviously to provocative chat we aim discourage in our youth. Furthermore, these packages allowed youngsters to move from one broken relationship to the next, because they had become so accustomed to this ‘enjoyable’ activity.

While I was writing this blog, I shared the issue with a friend who said,

“One learns ethics at home and curbing such plans will have no effect on youngsters. Those who know the difference between good and bad will always follow their principles.”

To which another friend who happened to be listening in retorted,

(Only the ones without opportunity are innocent)

And these packages are providing one with exactly this – the perfect ‘mokah’.