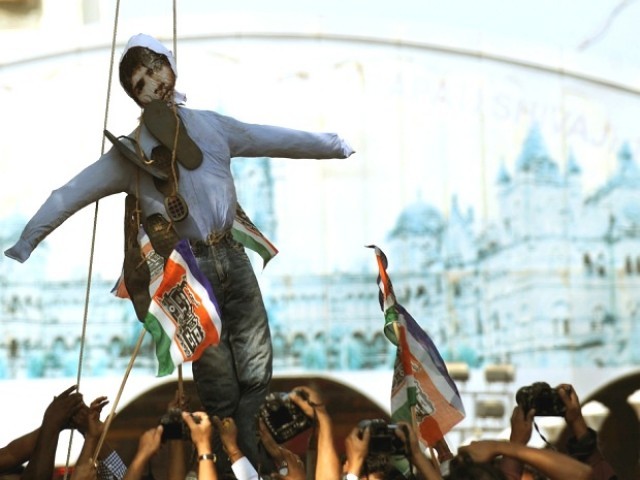 Even as many in the media began sounding triumphant, there were people whose heads were placed firmly on their shoulders. PHOTO: AFP

Unlike the Pakistani media that reported the hanging of Ajmal Kasab sparingly, the Indian media featured the story very prominently all day yesterday. I can vouch for the fact that for Indian television and online journalists it was a busy field day.

Literally, all angles of the story were covered – the actual hanging, the mercy petition, 26/11 survivors, 26/11 martyrs and Kasab’s last wish.

One of the reasons that got many elders in Uttar Pradesh and Delhi to watch television news was the invincible dumbing down spirit that India TV, a 24 hour Hindi news channel, exhibits time and again. They were true to their reputation yesterday as well, in an attempt to explain to the Indian public the nuances of hanging a terrorist they said, in a hurried tone,

“Faasi ke waqt Kasab bhi maujood.” (During the execution, Kasab was also present at the scene.)

– A piece of information that an average Indian was quite unaware of and was very hungrily seeking!

The English channels, catering to the intelligentsia, were only slightly more measured in their theatrics. Times Now had a two minute promo that called Kasab a ‘butcher’ more than four times! As much as we all agree that Kasab was a terrorist who came to the country to kill people in cold blood, there is little need to rekindle the wounds of the victims of the dreaded night of November 26.

Now that my usual amount of criticism has been meted out, I want to go on record to say that yesterday was a day when I also saw some good, balanced reporting done.

Not all Indians celebrated death.

There will always be channels that went overboard, reporters that got emotional and reportage that were opinions. But, an overall picture of the reporting done on Kasab’s hanging was better than the usual jingoistic, loud reporting.

Even as many in the media began sounding triumphant, there were people whose heads were placed firmly on their shoulders. Kafila, an well-known team blog, carried a piece on how a Mumbai terror attack victim sympathises with Kasab – sensible and level headed commentary on why people like Kasab are made and why we shouldn’t lose sight of the other side.

“Rejoice, fellow Indians. Ajmal Kasab has been hanged. But please excuse me, I am not joining you. Your cheering and hooting and hurrahs feel like a medieval lynch mob celebrating the death of the sinner and not the sin. ‘Barbaric’ is the word that comes to mind.

This isn’t merely about the morality or aesthetic of capital punishment. I want to ask you; what did we just achieve? Ten terrorists had come to kill and be killed, to cause maximum damage of the sort that they surely knew they’d be killed. Nine of them were killed in direct encounter. Did we hail their deaths? Do we say their deaths were justice? So if we killed Ajmal Kasab four years later – ‘with due process’ — what exactly have we achieved?”

Several senior journalists congratulated him on the piece and several others were concerned about the impact that this would have on the India-Pakistan relations.

And, the social media was rife with several journalists showing their frustration about the Pakistani establishment, but to their credit they targeted their anger towards only the authority. Divya, a senior journalist with NDTV said

“And can Pakistan stop looking away? Such pathetic leadership really, I feel sorry for the common man there.”

Read more by Raksha here or follow her on Twitter@Raksha_Kumar

Barfi!: A sweet cine-treat for all