It’s Israel who is the real super power, not the US 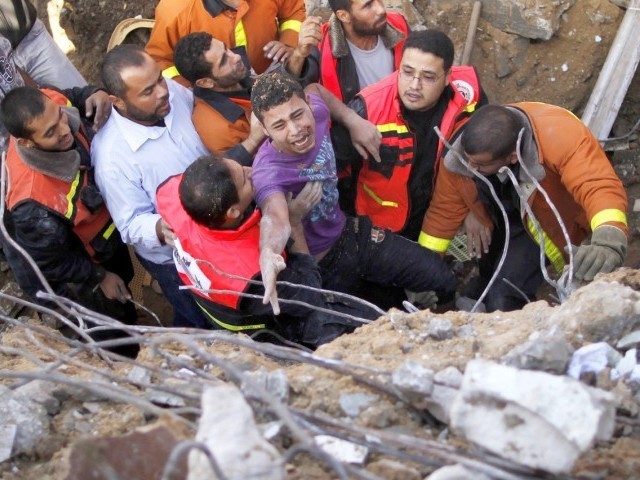 Hue and cry ensue where and when vested interests of western powers are threatened. PHOTO: REUTERS

Within a few days of Israeli air strikes, 130 Palestinians including at least 11 civilians, among them, six children and a pregnant woman were killed. An 11-month-old child, who was the son of a BBC Arabic correspondent, was killed too.

Five Israelis also have died since Israel killed Hamas’ military chief on Wednesday.  Middle East peace envoy and former British prime minister Tony Blair, without wasting time, showed his allegiance to Israel and called on Hamas on Thursday to stop firing rockets from Gaza into Israel. He said that as long as it continued, the Jewish state would act to defend itself.

”If the rocket fire carries on out of Gaza, targeted at Israeli towns and villages, then the retaliation will increase,” Blair told a UK television news network.

Blair, who represents the diplomatic quartet comprising the United Nations, United States, European Union and Russia, said the immediate priority was to calm the situation to stop it from destabilising the region. It seems that the former British Prime Minister has his eyes set on the next Nobel Peace Prize which has in recent years been awarded to the US President Obama, the European Union, and the Burmese opposition leader, Aung San Suu Kyi.

The world is aware of Obama’s role in world peace and the efforts that the EU carried out to rescue Libya, Iraq, Afghanistan and Syria. Suu Kyi’s silence on ethnic cleansing in Burma also raised some eyebrows. Considering that pattern, it won’t come as a huge surprise if the nominees of the next Nobel Peace Prize are Israeli Prime Minister Benjamin Netanyahu or Saudi King Abdulaziz, for their peace efforts in Palestine and Syria. The United States (as it has done innumerable times in the past) also threw its weight behind Israel after the latter launched a barrage of air strikes on the Gaza strip, and condemned Palestinian militants’ rocket attacks on Southern Israel. The fact that the US has used its veto power 10 times since 2000, nine of which favoured Israel pertaining to their conflict with Palestine, goes a long way to explain why this latest episode of unabashed defence of Israel by the US is nothing unusual. (A Palestinian walks past a burning house after an Israeli air strike in Gaza city. PHOTO: REUTERS)

Who waged the war?

The answer to this seemingly complex question might actually be very simple and straightforward. Israel started the air strikes whereas leaders in the West are urging Palestinian militants to stop firing rockets on Israel. Where does Hamas stand? It’s a political party and is elected by Palestinians, yet still labelled as a militant group in Western media.

Can we, by that logic, assume that if someone’s mutilating Western interests they should be regarded as a freedom fighter and a political leader or their struggle be termed as the Arab Spring?

Killings are backed by global leaders in the name of democracy and human rights thus making the UN, Amnesty International and human rights organisations essentially irrelevant. Hue and cry ensue where and when vested interests of western powers are threatened. (A Palestinian carries his belongings from a destroyed house after an Israeli air strike in the northern Gaza strip. PHOTO: REUTERS)

Over decades, thousands of innocent people have been relentlessly killed in Palestine. This is not just the military chief of Hamas who has been recently killed but Israel has committed the following brutalities:

In an average classroom, a teacher quizzing the students about who the superpower of the world is, would usually get a unanimous response; the United States of America. I, however, object!

Israel, in my humble opinion, is the super power. The European Union and the US play in the hands of Israel.

United States grants $3.2 billion to Israel annually. The Guardian revealed that Britain had helped Israel obtain its nuclear bomb 40 years ago by selling it 20 tonnes of heavy water.

The West and Israel have an astounding formula that most of the Muslim world has so far been unable to do away with: divide and rule.