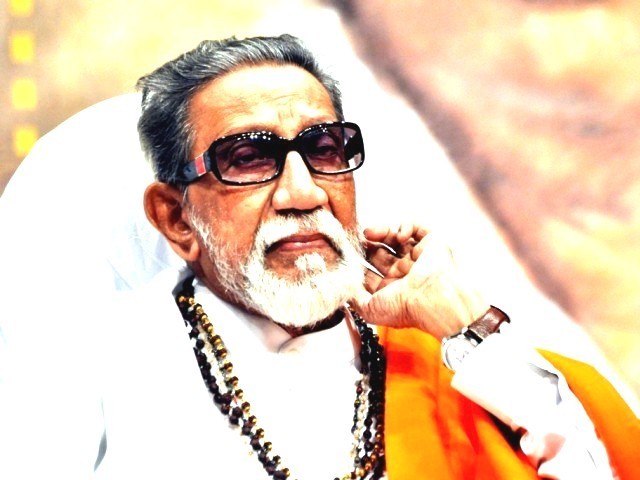 He has been a merchant of fear and it is this fear that stalked the streets of Mumbai since the news of his serious illness became public. PHOTO: AFP

Finally Bal Thackeray succumbs to his own fear – fear of his own death.

If there is one word that defines this rabid Hindu nationalist it is ‘fear’. It is to his credit that this cartoonist turned religious fundamentalist and rabble rouser maintained his hold over Mumbai for almost five decades on the basis of fear. Thackeray’s strength was not the ideology that his political group, Shiv Sena, espouses, but fear that his party ignites amongst his supporters and cadres.

That’s why it’s difficult to characterise this man as a politician or a leader. The outpourings of obituaries and condolences after his death on Saturday are very confusing for many who have not followed Thackeray’s political trajectory. But those who know his life history understand that this saffron clad man was more notorious than popular.

‘Don’, ‘Tiger of Mumbai’, ‘Bala saheb’ and so on were the popular names by which this man was commonly known, who died after prolonged illness at the age of 86.

A Hindi movie few years ago, named “Sarkar” depicts him as a city mafia who competes with other of his ilk’s to control the political and economic space of Bombay, which became Mumbai when Thackeray’s Shiv Sena managed to cobble up a majority in alliance with the Hindu right, Bharatiya Janata Party (BJP) in the dark ages of the 90s when religious polarisation reached its height in the aftermath of the demolition of the Babri Masjid in 1992.

The Shiv Sena supremo defies the normal political description which would characterise a majority of the Indian politicians. He was not a by-product of the mainstream democratic tradition but an aberration. That’s the reason despite being in the business of politics for almost five decades, he could never become a normal politician. He remained the prisoner of an image; the image of a mafia don who wanted to control a big city on the basis of guns and goons.

He could not take the mantle of regional leadership despite being in politics since 1966. In his home state, Maharashtra Sharad Pawar, the leader of the Nationalist Congress Party (NCP), is known as a regional satrap but no one ever described Thackeray as a regional leader despite forming his political party four decades before Pawar formed his own.

His method of public mobilisation has never been political campaigning or selling a vision. He has been a merchant of fear and it is this fear that stalked the streets of Mumbai since the news of his serious illness became public.

Balasaheb Thackeray practiced politics which were a mixture of rabid Hindu fundamentalism and regional chauvinism. When he started his political journey in late 60s he raised the issue of non Maharashtrian’s settlement in the Mumbai city, a city of dreams.

The Shiv Sena instigated violence against the settlers, mostly the South Indians and Gujratis, who came in search of jobs and opportunities, to the metropolis. On top of that his anti Muslim communal campaign further accentuated Sena’s identity.

This politics of hate was in full display in 1992, when Thackeray’s inspired hate campaign claimed more than 1000 Muslim lives in one of the worst religious violence outbreaks against the minority in the big metropolis.

The injustice done to the minority Muslims, the violence perpetrated against the community and complete lack of inaction on the part of the government against the Hindu fundamentalists led to the serial blasts in 1993 that claimed many lives. Thackeray played a prominent role in both these events.

Past these events, Mumbai could not remain the same.

Bal Thackeray stands accused of vitiating the cultural and emotional ambience of the city. He stands accused of negating the rich history of social reform movements and freedom struggles that the state of Maharashtra was known for.

He leaves behind a bad legacy in the name of Raj Thackeray, who is more brazen than his notorious uncle.

While his uncle targeted South Indians, the nephew is targeting people from Eastern India for making Mumbai their home and a nest for their dreams. He let loose his goons on the hapless people in the same way as the senior Thackeray used to do throughout his public career.

Narendra Modi is an illegitimate political child of Bala saheb’s crude political conduct. The Chief Minister of Gujarat, and senior BJP leader, seems to have been inspired by Thackeray who managed to dodge laws despite being responsible for killing so many people in his long career as a Shiv Sena leader.

Sri Krishna Commission, set up after the 1992 riots in Mumbai directly blames Thackeray and his group for killing at least 1,000 Muslims, and yet, he remained to live a peaceful life, scot free of any threats or repercussions throughout his life.

Modi, who allegedly presided over the death of hundreds of Muslims in 2002, remains a survivor despite damning political and moral indictment. He, on the contrary, is dreaming to become the Prime Minister of the country.

If Raj Thackeray and Narendra Modi, along with their uncouth brand of followers are the real inheritors of Bal Thackeray’s ideological legacy then one can only imagine what kind of personality the founder of Shiv Sena was. One can also imagine what kind of dent such an individual, with his own organisation and ideas can make in a secular and democratic society.

Although Thackeray had his own rabid cadres to massage his ego, some of the well-known personalities tried to give him a legitimacy that such an individual definitely did not deserve. These personalities and stars seem to have quid pro-quo relationships with the ‘sarkar’. ‘Sarkar’ would protect their business and Bollywood interests, and in return the stars would give legitimacy to him and his work, which otherwise would not have come to him.

Amitabh Bachchan, the popular star of the Mumbai film industry, is good in this trade off. His popular poet father, Hariwansh Rai Bachchan, dedicated all his muses for religious syncretism and secular traditions of the country, but the son has shown a remarkable ambivalence on this issue.

When no major star or public personality would like to be seen in the company of Narendra Modi, this superstar not only became his votary but also the brand ambassador of a state which has largely segregated its minority population, where hundreds still cry for justice for the irreparable loss they suffered in 2002.

For Bachchan, Bala saheb was also an epitome of virtue and one of the kindest human souls to have existed on this earth. He and his son even braved a surging crowd to meet the critically ailing Shiv Sena patriarch.

But no amount of legitimacy and approval can acquit Bala saheb from the sin and crime that he committed on hundreds of hapless citizens of the country.

It is a matter of great satisfaction that people like Thackeray got marginalised in his own life time. They could not damage the democratic and secular polity of the country despite their concerted efforts.

Shiv Sena split and his nephew, Raj Thackeray, formed a new faction. No government could book Thackeray for his crime but the people’s court has largely rejected him.

But the great victory here lies in the hands of the people of Mumbai and Maharashtra. The real winners, who have remained united and resilient- they have been the real preservers of Indian ideals; ideals viciously challenged by the Shiv Sena leader, Balasaheb Thackeray.

No fear can stop the spirit of Mumbai.