Is ‘exposing’ Karachi’s flaws betraying it? 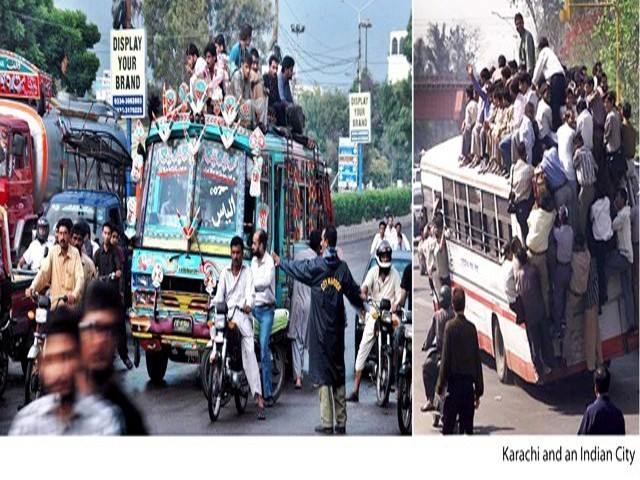 In the search for solutions perhaps we have to face tough truths. PHOTO: FILE

I was dining on risotto by Lake Como at the Rockefeller Foundation’s Villa Serbelloni in Bellagio in Italy – and I wanted to cry.

My ‘tormentor’ was an erudite Canadian professor who is on a writing residency at the foundation’s retreat where she has come to work on an immigration project spanning several cities. I was there to cover a conference on cities and had just finished telling her, among other things, about traffic congestion in Karachi, my city of an estimated 18 million people where the car is a status symbol and red lights might as well be green.

I had just told her about our inability to properly ticket traffic violators.

Along the way a discussion of Karachi’s violence inevitably cropped up. As the plates were taken away and the salmon appeared, she said,

“So, you are living in a failed state.”

Suddenly, I did not want to eat any more.

I did not respond, except with a watery smile. What could I say? There was a measure of truth in that observation. How many times had I heard it before, read about it in the opinion pages of our newspapers and in international publications. The professor was just giving her professional opinion on the information I had just provided her.

Immediately, I felt guilty about giving such terrible examples, exposing Karachi, stripping it naked; ‘betraying’ it.

As it is, talking about Karachi is extremely fraught and painful. For a split second I scrambled to think of happy stuff I could have told her. But then I slumped back in my silk-upholstered chair. It felt cheesy to try to valiantly defend Karachi as a ‘vibrant’ city to try to counter the stories of the breakdown in the rule of law with ones of festivals (we really are a happy people… promise!) I am not comfortable with that approach either.

The four-day conference I was covering was precisely focused on this complex interlocking of resilience and liveability for cities. It was organised by the Municipal Arts Society of New York City (MASNYC) and supported by the Rockefeller and Ford foundations. And during each session, I was sorely tempted to keep pressing home a raw point based on my rudimentary understanding of resilience;

“Karachi is a resilient city; we go back to normal an hour after a bomb blast.”

After that dinner, which was partly assuaged by the torta mimosa, I retreated to my room to nurse my feelings. And over the next two days, for the remainder of the conference, I had time to reflect on my betrayal. I realised there was another reason why it hurt so much to hear from an outsider that I was living in a “failed state”.

That reason was the Indians.

There were two of them at the conference. One of them gave examples of how nine kilometres of beachfront had been rehabilitated in Mumbai with the celebrity support of none other than Shabana Azmi. The other talked about community and how they had set up the Indian Institute of Human Settlements to tackle India’s growing concerns. I realised that I would be hard pressed to remember any negative comment they had made about their country.

Yes, they mentioned problems, but only to talk about how they had been solved. They talked about the challenges, but only to showcase how they had been met. Perhaps it was just my interpretation of the way they communicated, because of the particularly vexed position I found myself taking vis-à-vis Karachi, but it felt as if they had a quiet pact not to mention India’s ugly side.

But I had a feeling that the group of urbanists and city planners, community activists, environmentalists and professors who had gathered for the conference must have been aware of the reality of India, its poverty, slums, failure in governance, violence and corruption.

Towards the end, as I packed to head home, I went through a catalogue of the first 50 years of the Rockefeller Foundation’s Bellagio Centre where scholars, writers, doctors and poets had come to thrash out the world’s thorny problems – from nuclear warfare to genital mutilation.

I had been in the place where Susan Sontag, Joseph Heller, Maya Angelou, Anita Desai, Michael Ondaatje and Maxine Hong Kingston had all written part of their cosmic manuscripts as fellow residents. The Bellagio Centre was a space where the human condition’s complexities as they intersected with globalisation’s benefits had been painstakingly examined for half a century.

The MASNYC conference was particularly close to my heart as it problematised what constitutes resilience and liveability for cities. I will be writing in detail about what I learnt there. But this I will tell you for now; it became clear to me as an uncomfortable necessity that it was only by being nakedly honest about Karachi and searching for a vocabulary for its struggles that I would begin to understand where the solutions lie. And wasn’t the entire point of attending the conference sharing and soaking up solutions, approaches and ways to mend its broken parts.

I can only hope that the people who are able to effect the change are reading this.