Wake up Pakistan! This is your war 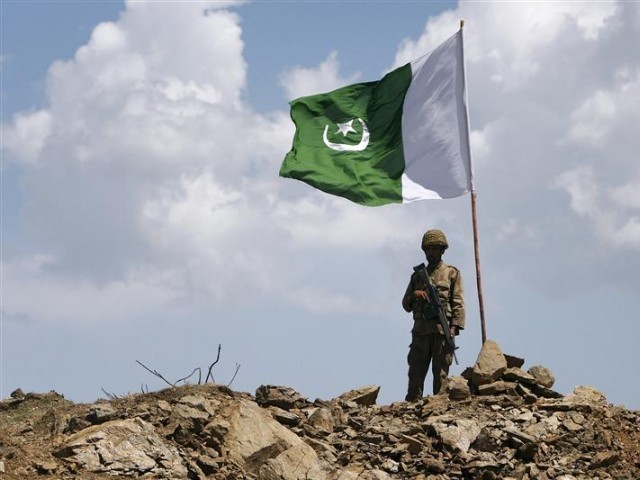 Pakistan must either acknowledge that it cannot win the war of aggressive counter-terrorism without international help or come to terms with its militant extremists. PHOTO: REUTERS

Pakistan is out of step with the rest of the world – a recent poll showed it was the only country to prefer Romney over Obama and is now proved to be on “the wrong side of history”.  Obama’s win on November 6 for a second term has been recognised by every country but Pakistan as a historic decision that is good for the peace and security of the Middle East.

The international community has welcomed the election result with much relief as, unlike his Republican opponent, ex- Governor Romney, President Obama will not engage in unilateral military action and will not confront China aggressively over its currency. Instead, Obama will continue to pursue his current cautious policy of pragmatic, multilateral diplomacy, disengaging from Afghanistan and paying close attention to the global financial crisis.

Pakistan seems to be out of step also with the Arab Spring movement, where people are recognising that corrupt and autocratic governments are the real enemy – not the US for sending aid which all too often props up the government instead of going to the people where it’s needed. To judge the US by its military interventions is too hasty – when the blame should lie with the government which requested it, condones it and professes to reflect the will of the electorate.

The CIA drone operations in Pakistan appal every person of conscience and the loss of civilian life does not justify the objective of ridding the frontier area of extremist violence. It isn’t working and the killing of leaders only seems to create new leaders with a more entrenched commitment to violent revenge. The intensity with which the US is hated and blamed for these deaths is disproportionate when it is compared with the civilian deaths caused by the Taliban and its allies within Pakistan.

The Bureau of Investigative Journalism has estimated that between 474 and 881 civilians have been killed in drone strikes between 2004 and 2012. Compare this with the Institute of Conflict Management’s assessment of 44,400 deaths in Pakistan from 2003-2012 comprising 14,600 civilians, 4,700 military forces and 25,000 terrorists and insurgents.  In the balance of justice, the civilian deaths caused by drones are far outweighed by the death tolls from indiscriminate suicide bombs and insurgent attacks.  The CIA at least tries to use sophisticated intelligence to strike at named, high-value terrorists, military training camps and suspicious compounds in areas controlled by militants.  The random slaughter of people waiting for a bus or doing their daily marketing seems infinitely more shocking.

However, there is no doubt that the CIA drone program has become a symbol of American military power, by ignoring national sovereignty and killing innocent civilians. Worse still, it has established a precedent for other countries who will now wish to use drone technology to cross borders to kill enemies.

By focusing on the drones deaths and blaming the USA, it makes it easier for the Pakistani media to ignore the fact that Pakistan is at war with its own people. Pakistan must either acknowledge that it cannot win the war of aggressive counter-terrorism without international help or come to terms with its militant extremists.

Pakistan-US relations need re-calibration and it would be to Pakistan’s advantage if people would stop blindly hating the US and be more discriminating. They will find it is not President Obama, but the remnants of the old guard, the neo-cons and the generals who have made a case for counter-terrorism using drones. By following their advice, the President has proved conclusively that the Democrats are not “soft on terror” as the Republicans liked to portray them and now he no longer has to prove this to get re-elected, it is to be hoped that he will review policy and continue to scale back and eventually cease the drone program.

This will give voters in Pakistan the chance to question their own government’s role in prolonging the conflict. It is very much Pakistan’s war, and the military needs to be reminded of that. Pakistan’s leaders need to consider the alternatives if the US withdrew all military action and aid. As the NATO troops withdraw from Afghanistan, leaving a resurgent Taliban with destructive and self-destructive capabilities, Pakistan may well regret its cavalier response to US intentions.

As the next election approaches in 2013, Pakistanis need to give some thought to new regional and international alliances that best serve the country’s economic interests. The country cannot stand alone against the rest of world opinion and potential leadership is aware of this.  Imran Khan, probably Pakistan’s next Prime Minister, is very aware that the present government is more beholden to the US than to its own people. His populist calls for an end to the CIA drone program may well help get him elected, but he knows that what the people really want and need is a radical change of government, an end to corruption and bureaucratic incompetence and a turn around for a state on the edge of failure.

Given the enormity of the task, Imran Khan would be wise to use all the help he can get. He is much more likely to get assistance from President Obama in the next four years, than from a Republican administration if Romney had won. Obama was on the right side of history when he supported Tunisians, Egyptians and Libyans against their despotic and corrupt leaders. His policy has been described as pragmatic multilateralism rather than the “nation-building” of past administrations, and regional security is becoming the responsibility of other countries and associations rather than relying on a US military presence. Obama is showing the restraint, foresight and maturity that has been absent in US foreign policy for too long, and while not by any means retreating into isolationism, the US will act with greater forbearance, restraint and hopefully, generosity for the next four years.

Obama also recognises that the US has been unable to replace the Taliban with a viable democratic government in Afghanistan and that civil conflict in that country will continue indefinitely. As NATO troops are withdrawn and Afghanistan is left with its own security forces to maintain order, Pakistan’s responsibility for its border will become more critical. Without a military solution, the next government will have to undertake some serious diplomacy if it is to end the killing in the border areas.  Pakistan cannot keep blaming the US for its failure to bring lasting peace to the area and would be wise to keep the Obama administration as a friend and partner instead of fabricating a media war against the US.

Another candidate aspiring to lead his Muslim country, Anwar Ibrahim of Malaysia, sent a congratulatory message to President Obama, urging the president to fulfil the pledges he made some four years ago in Cairo.

“After all, freedom, democracy and Justice are not aspirations confined to the Middle East but are universal aspirations which are desired equally in Southeast Asia.”

With Iraq and soon, Afghanistan, behind it, US foreign policy will turn more toward Southeast Asia over the next four years, giving Pakistan room hopefully, to reflect, reconsider, recalibrate and move on to a better and more just future.

Read more by Azeem here or follow him on Twitter@AzeemIbrahim