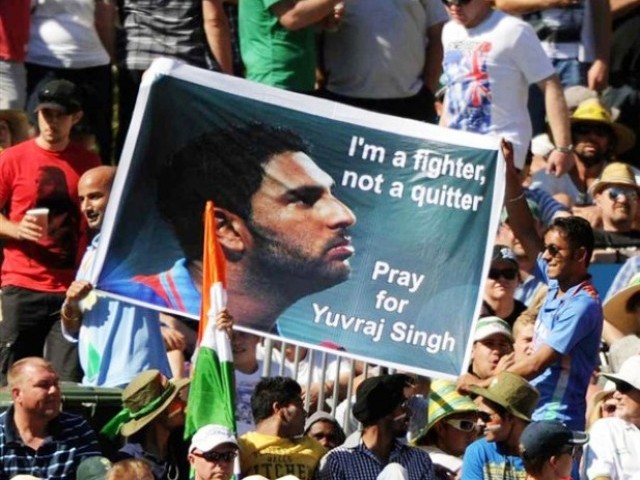 “When I was diagnosed, I was really scared. I was not coming to terms that I have got cancer. Being an athlete, it was hard to believe. The hardest part of this journey was staying positive. I used to stay depressed all the time and wanted love and affection from people. I felt like the ugliest man around” PHOTO: AFP

These were the words of an international cricketer – coming back home – who a couple of days earlier, did not know if he would ever play cricket again.

The morning of April 9, 2012 saw Yuvraj Singh arrive back in India- this time, not as a world-class cricketer but as a cancer survivor.

Received by his mother, Shabnam Singh, at the Indira Gandhi International Airport in New Delhi, he seemed nothing less than a champion having hit cancer for a six. Moreover, the ingenuous welcome by his devotees reflected nothing but incalculable approbation, besides the expected media frenzy.

Barely does an athlete receive such a salutation back home. But then, Yuvraj was is ordinary fighter. The world, who until the recent past regarded him as a gifted cricketer, has now been given a reason to call him a fighter and a champion in the true sense of the words.

“When I was diagnosed, I was really scared. I was not coming to terms that I have got cancer. Being an athlete, it was hard to believe. The hardest part of this journey was staying positive. I used to stay depressed all the time and wanted love and affection from people. I felt like the ugliest man around”

Yuvraj underwent three painful chemotherapy cycles at the Boston Cancer Research Institute in the US.

On a positive note he didn’t isolate anyone; in fact, he managed to keep his family, friends and fans updated with his battle by staying in touch through public forums online. He was seen regularly interacting with the world through Twitter and received an overwhelming amount of feedback from not only his Indian supporters, but cricket followers the world over. From celebrities to his little fans and from fellow athletes to Lance Armstrong – prayers and wishes for Yuvi kept pouring in like never before.

And then came the big day; the day we anxiously awaited for so long.

Amidst depressing weather, it was Yuvraj’s bright smile that stole the limelight, as India took on New Zealand in their first T20 internationals.

The game however was abandoned as heavy rain took over Visakhapatnam.

Nevertheless, September 11, 2012 was the day Yuvraj Singh stepped onto the cricket field after 10 months. It was the day the stadium was filled once again with avid fans roaring ‘YUVI’ in support of him all across the arena; the day jersey number 12 shone as bright as the sun again.

“For me personally it was a big emotional moment to get on the field. I had tears in my eyes when we were fielding. Luckily, the cameras did not catch it.”

I need not remind you just how many proud moments this southpaw has given his nation. However, this phase of his life shall be looked upon as a beam of inspiration, not only for the sporting world, but for the many people who are combating this disease everyday of their lives.

“I want to portray to everyone who have the same illness, that don’t be afraid. I was also in denial, I was also afraid. Fight it out, be strong. It’s not easy. But if I can do it, they can do it too.”

Having beaten cancer in a short but fierce battle, Yuvraj Singh now wants to help others fight the disease. To support his cause, he launched a charity called ‘YouWeCan’ that will set up detection centres across India and hold awareness campaigns.

“I endured a lot of pain and don’t want others to go through this. Early detection and awareness will go a long way in saving lives.”

Being a Yuvraj Singh devotee from the start, I had never imagined seeing myself sit down and pen his struggle and survival through cancer, but it was his strength and determination that gave me the courage to write today. I wanted to preach his story, in my word, and let people drive as much inspiration as I did from his battle. I wanted people to see that survivors are strong and I wanted people to draw encouragement and motivation from Yuvraj Singh’s story. He showed the world how strong and determined a person can be and today, I dedicate this post as a tribute to his fight against cancer. I dedicate this post to Yuvraj Singh’s strength and to all those who can draw inspiration from his struggle; just as I did.

Yuvraj will soon be seen telling his story in his own words in a three-part series called “Zindagi Abhi Baaki Hai” to be aired on national television. But at the end, what we need to remember is not the fact that it was Yuvraj Singh’s fight against cancer- it was the struggle of a mere mortal against a life threatening disease. This post was to show people that Yuvraj Singh went through same thing and survived- it’s for all those who at some point in their lives did not know how long they were going to live for.

This goes out to everyone who thinks he lived a hopeless hard-shelled life. No success comes without a struggle- Yuvraj’s story just goes to prove that.

You can either let your hardship kill you, or turn you into a stronger person. I would definitely choose the latter.