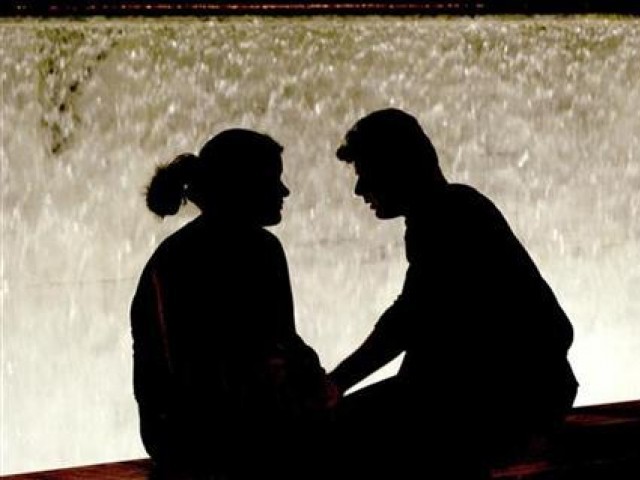 He smiled to himself again as he pulled on his socks, revelling in the chaos around him. This was his world; noisy, messy and completely complete. PHOTO: REUTERS

He watched her from the corner of his eyes as she tried to contain her long, impossibly curly hair into a bun on top of her head.

His 5-year-old son was running around in circles making it absolutely impossible for her to put his shoes on him. As she finally grabbed him and started to briskly slide the shoes on his feet, a few wild curls escaped from the bun she had managed to make on her head and she muttered under her breath as she pushed them out of her eyes.

He smiled to himself.

As she was done getting their son ready, almost on cue, there was a piercing cry from their bedroom. The baby was up, wailing frantically for her bottle.

She turned quickly, causing those untamed curls to break free from the confines of the bun, looking like black waves cascading gloriously down to her waist as she ran to the kitchen in her rush to get the baby’s bottle.

He smiled to himself again as he pulled on his socks, revelling in the chaos around him. This was his world ─ noisy, messy and completely complete.

“Are you ready,buddy?” he asked his son.

“Baba, tell mama I don’t want to go to school today! I want to go to work with you!” his son looked at him, with his wife’s eyes, imploring him to save him from school.

He laughed as he picked his son up in one swift motion, and walked towards the bedroom.

She sat there on their bed, in her pyjamas and a navy blue kameez; their nine-month-old baby daughter cradled in her arms.

He did not know exactly what words could best describe the emotions that played across her smooth golden face. He just knew that those emotions were possibly the purest form of love there ever was. Every time she held their baby, he felt like a light switched on inside her, radiating the sort of love that could light up the sky, illuminating her face and everything around her.

To him, as always, she looked most beautiful then, in her worn out pyjamas and her wild black curls, her eyes still carrying traces of sleep in them, not an ounce of makeup on her face. Simply glowing with love for their children.

“Suniya, we are off,” he said, as he plopped his son down from his arms so he could go give his mother a hug goodbye.

“But baba! I told you I want to go to work with you today!”

Mikaal’s eyes…her eyes, started to brim with forced tears as they looked up at him.

“Meri jaan” (‘My love), she said, as she bent forward and pulled him to her.

“I will pick you from school early today. Then we will go meet baba for lunch. What do you think about that?”

“Okay! McDonald’s?” the tears were gone as he started to bounce up and down with excitement.

She placed the baby on the bed and hugged him tight, her face lighting up again, with that glow he was so familiar with now.

“Yes, meri jaan, we’ll go to McDonald’s.” she said with a smile.

Mikaal pumped his fist in the air and bounced out of their bedroom calling behind him,

They looked at each other and laughed at the joy that was their son.

She got off the bed and walked up to him.

“I will come around noon and we can take him to lunch then. I will leave baby Eisha with Ami (mother); she said she will come today.” she put her arms around him.

“Are you going to hug me goodbye?”, she teased.

This was their joke; he was not big on hugs or words, or any displays of emotions in fact.

“But words are all we have in the end”, she would tell him often.

He said peeling her arms away from him while trying not to let her see how happy that gesture made him.

He tugged at a tight spring curl as she frowned at him for not hugging her goodbye.

“You will never change,” she sighed,

“Khuda hafiz. I love you.” (Goodbye, may God be with you)

He kissed the baby and started to walk out of the room.

“Hello? At least an ‘I love you too’ would be nice!” he heard her call out from behind in annoyance and laughed as he closed the door behind him, his heart brimming with tenderness for the woman he loved.

That same day, later that night, he held her soft hand in both his hands and for the first time, words spilled out, like a dam had been broken.

“I love you, Suniya, I love you more than you will ever know. From the first time I saw you, I knew in my bones you were made for me. And from that day on, nothing and no one could complete me the way being with you did. You are the love of my life. If I live a thousand lives; in every lifetime, you and I will be together, you will be the love of all my lifetimes until the end of time.”

“Are you listening, Suniya?” he gently kissed her hand and then bent forward to touch her beautiful wild hair.

“I love your hair. I could lose myself in your hair. I know I know I never told you that before, but tonight I want to tell you everything.”

“You always tell me that I don’t express myself. You always say; “Use your words Asad. Words are all we have. Nothing should be left unsaid”, you once said to me, especially not words of love or joy. You were right, Suniya; today I want to say everything.”

“But you must have known all these years, my love, that I love you more than words could ever express. Some things are so precious, so dear to us that we want to keep them inside us, not just close to our heart, but seeped in the essence of our soul, and my love for you is such a thing, that I felt it in my soul and I knew always, that my soul reaches out to your soul and whispers what you are to me, even as the words don’t come out of my mouth. Even as your ears never heard these words before, how could your soul not have known? Am I right, Suniya? Tell me I am right.”

“But I know you always have pined for sweeping gestures of love. I love that about you too; your desire for romance and passion and all those things that I always thought only happened in books or movies. You believe they happen in real life and I know I have always teased you and made fun of you but you are right, the things that people say in books, I feel them for you, always have, and always will. I just did not have the courage to say them. I don’t know why.”

Tears started to fall from his eyes and he felt like his world was ending.

She lay there; white as a ghost, all life, all light, sucked out of her. Tubes and machines connected to her body, a giant gash on her chest that had been covered with bandages. Then he looked up, above her head and saw her heart’s chords beat a little faster on the monitor.

He became frantic, losing all control as he started to scream her name and squeeze her hand, willing her to open her eyes, willing her to allow him to say what she always wanted to hear. But then, just as it happens in movies and books, the line went flat, and with that line his world ended.

He had lost her to a freak accident when she had arrived at their son’s school to pick him up. A bus had hit her as she walked across the road towards the school.

And now, words were all he would have.