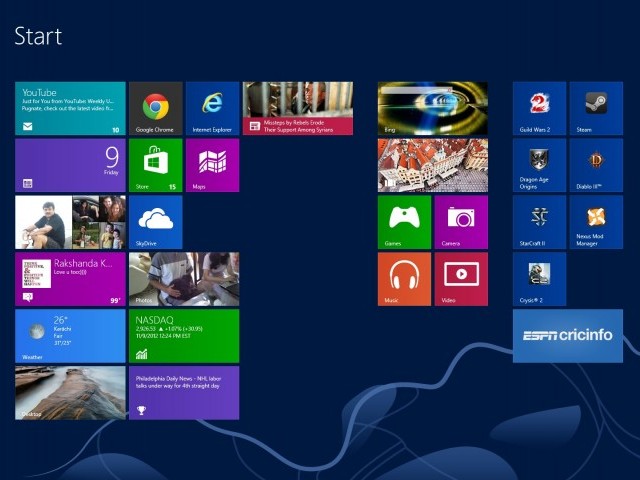 Windows 8 sports a new interface termed ‘Modern UI’, which was previously called the ‘Metro UI’, but the title has since been changed due to rumoured legal reasons. PHOTO: NOMAN ANSARI

I didn’t expect Windows 8 to be very good. Why? Because Windows 7 was excellent, and as longtime Microsoft consumers understand, the Redmond based software giant hasn’t released two quality iterations of Windows in a row.

Not until now, that is.

Windows 8 has been a pleasant surprise. It looks quite gorgeous, runs lightning fast, and best of all, is rock solid. For the $15 upgrade price I purchased it for here in Pakistan, it is an absolute steal for an officially licensed operating system.

Over the years, whenever Microsoft has tried to take revolutionary steps with Windows, the initial results have invariably been rocky, with Windows 95 and Windows Vista having had especially poor launches. Meanwhile, some of the best versions of the operating system, such as Windows 98SE, Windows XP, and Windows 7, have been refinements of previous iterations, especially the latter, which trimmed the fat off the notoriously bloated Windows Vista to become an instant fan favourite.

So how does Windows 8 manage to take such a huge step forward without stumbling much? Well, the secret is that although it is a revolution on the surface, it is an evolution underneath.

Windows 8 sports a new interface termed ‘Modern UI’, which was previously called the ‘Metro UI’, but the title has since been changed due to rumoured legal reasons.

Like many, I find the Modern UI to be an aesthetic masterpiece ─ a work of art. This new interface is essentially an arrangement of ‘live’ tiles, where each tile is basically a programme icon, which is visually changing, sometimes with real time updates through the internet. Some of these tiles, such as those related to communication and social networking, offer live updates of a personal nature. The tiles can be customised and switched around to suit users, and are a blast to use.

The intuitive nature of the Modern UI isn’t only limited to the tiles. Any tile double-clicked, leads to a Modern UI based programme which follows the consistency of the beautiful art direction. Programmes such as those that allow you to check your email (Mail tile), exchange instant messages with Facebook and IM contacts (Messaging tile), or allow you to read the news (News tile), are joyful to interact with. The latter especially feels akin to reading a digitised magazine. I have to say that at this point Modern UI has spoiled me, and I seriously love its ‘Messaging’ tile, which easily beats Facebook’s own messenger.

The native Modern UI apps aren’t flawless, however. The messaging application for example, can exhibit slight delays in messaging Facebook contacts. Meanwhile, the market place isn’t extensive yet, with understandably only a handful of options so far.  The ‘Games’ tile is also useless, as it does not feature installed PC games for now. Other annoyances include a lack of customisation on some of the tiles. For example, importing pictures to the Modern UI is a bit of a nightmare in terms of navigation with the options in the ‘Pictures’ tile frustratingly limited. That being said, none of the issues with Modern UI are deal breakers, and future patches from Microsoft should amend these niggles.

Traditional users not quite enamoured with Modern UI, or still in love with the tried and tested desktop platform, shouldn’t feel disheartened, as Windows 8 still retains the desktop interface, which can be accessed through the desktop tile on the Modern UI.

Here, you will notice the desktop is mostly the same as Windows 7, except for one major difference: the lack of a start menu. Instead, clicking the start button on the taskbar in Windows 8 switches to Modern UI. This is initially frustrating, as force of habit will unintentionally lead to Modern UI regularly.

Worse is that by default, files on the desktop, such as music, videos, and the like, are assigned to applications on the Modern UI rather than applications on desktop. Also, since there is no start menu to access, Windows 8 users will regularly find themselves switching from desktop to Modern UI to use regular applications such as “defragment”, “calculator”, “MS paint” and such, where they are now located.

The result can initially be slightly confusing, as users will regularly find themselves switching between the two interfaces needlessly. This leaves Windows 8 with what comes across as a multiple personality disorder. However, there are some quick tips that I can offer, which will go a long way towards ironing out the creases in the new OS:

1. The start menu is no more, but the taskbar still exists on the desktop. Right-click on the Modern UI start page to access “All apps”, where you will reach a list of all installed applications. Here, right-clicking on any application will allow you the option of ‘pinning’ applications on to the desktop taskbar. Thus, you can access all your favourite apps from the desktop without having to visit Modern UI. Also, the ‘set default programmes’ option in the control panel can be used to set default access from desktop programmes rather than the Modern UI. These two quick steps will help Modern UI and the traditional desktop feel like independent entities.

3. Those still not happy with the lack of a start menu can use Stardock’s Start8 programme, which seamlessly integrates a customisable start menu into Windows 8. For even more tips and tricks, readers can use the excellent guide by Ars Technica.

Regardless, some issues related to the multiple personality disorder in Windows 8 can’t be fixed at this point in time. For example, browsing the internet in Modern UI will open a separate navigation programme from the desktop. So in theory, you could have an Internet Explorer programme open in the Modern UI, and another, unlinked Internet Explorer on the desktop. Similarly, at this point in time, if you want to view images using the Modern UI pictures tile, you will have to ‘import’ them to your Windows documents folder, even if they already exist on your hard drive elsewhere, resulting in a waste of hard drive space.

In spite of the fact that Modern UI and desktop sometimes run the same programme separately, Windows 8 is blazingly quick. In fact, it is easily the speediest operating system I have ever used by far. Switching between applications is smooth as butter. Moreover, video games such as Diablo 3, Guild Wars 2, Crysis 2, Skyrim, all run incredibly well, and according to benchmarks I have seen, run at higher frame rates than Windows 7. Gamers who use the Steam platform will be pleased to note that the games on that system also run perfectly.

The stability is incredible with not one application having crashed since I installed Windows 8 two weeks ago. How is it possible that a new Windows, which is seemingly snazzier, runs meaningfully better? The answer lies in the tablet market, which Microsoft is targeting aggressively with Windows 8.

Typically, tablets are significantly weaker in terms of processing power than the average PC, so for tablets to run a very flashy operating system such as Windows 8, the operating system has to be extremely efficient at managing memory and power, while being quite steady at the same time. Windows 8 is up to this challenge with massive refinements under the hood, where it allows for memory sharing of running programmes, and accesses certain executables more efficiently.

Beside that, Windows 8 has gone through other overhauls that allow for better processing. Of course, benefits which allow for faster performance on tablets, naturally translate to even better performance on PCs, where the systems have more muscle. But the improvements don’t end here. The start and shutdown times in Windows 8 are a matter of seconds, while the installation process is easier than ever before.

In Microsoft’s push for Windows 8, I see a lot of parallels with their entry into the console market with the Xbox. In both scenarios, the pricing is aggressive, with Microsoft selling at a sizable monetary loss in order to gain market share into a more lucrative market.

In terms of the video game consoles, PC users benefited with a sudden boost in video game graphics standards. With Windows 8 on special offer till the end of December, PC users are once again benefiting from Microsoft’s interest in a linked market, not only in terms of product quality, but in terms of value as well.

Windows 8 currently can be bought for USD39.99, while it can be upgraded to for as little as USD14.99 in certain circumstances. Compare that to prices of Windows in the past, which ranged north of USD 149.99, and you have a real bargain.

All in all, I find Windows 8 to be the complete package; in terms of usability, performance, and price, this new operating system is a must have.