Will Disney do justice to Star Wars? 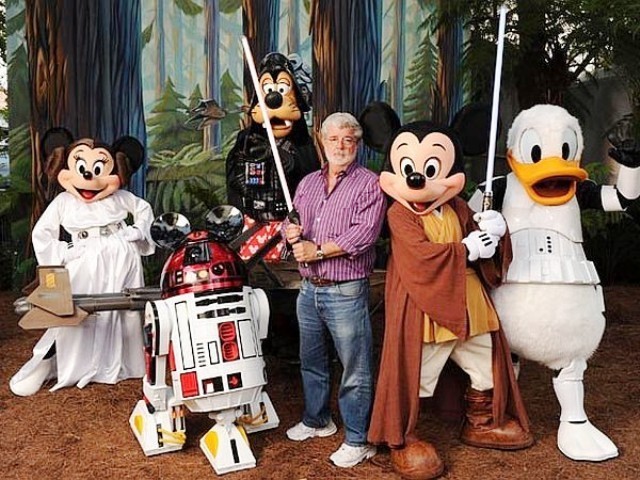 Rest assured, The Walt Disney Company will want to protect the integrity of its investment, and you won't see Chewbacca dancing with Mickey Mouse in the next Star Wars film. PHOTO: AFP

But it seems that for many, George Lucas, the man behind Lucasfilm Ltd., isn’t the force he once was.

Some of this is understandable, considering that the last film in the Star Wars franchise was released in 2005, Revenge of the Sith, and it capped a prequel trilogy, which while entertaining overall, lacked the heart and soul of the original three films. Moreover, since then, franchises such as The Avengers, Batman, Transformers, and Harry Potter have established themselves further, replacing Star Wars at the top of geek culture.

For diehard fans, part of the problem has been George Lucas himself. When Star Wars hit it in 1977, its massive impact on the box office, popular culture, and filmmaking itself was unprecedented; thanks to the film’s success, suddenly, other big budget films with expensive special effects started to headline summer releases. Phrases like, “May the Force be with you” became a common part of popular culture, and merchandising for films was revolutionised like never before, with every fan wanting a piece of Star Wars.

Even today, I remember as a child playing with a flashlight in complete darkness, pretending it was a light sabre. And from my college days, I have fond memories of attending the opening day of The Phantom Menace (1999), where the majority of screaming fans were dressed up like popular Star Wars characters.

Yes, Star Wars has gained an army of obsessive fans over the years, but none more so than George Lucas himself, whose fixation with his work has grown steadily with time.

The original Star Wars trilogy was a more corroborative effort, with some of the best and most iconic moments in the films stemming from creative minds other than that of George Lucas. Sadly, George Lucas took tighter control of the franchise when he started putting together the prequel trilogy, writing and directing all three of the newer films on his own. The result was a somewhat underwhelming series, which while amazing in terms of special effects, was sometimes laughably weak on the narrative front.

Lucas also released multiple versions of his older films with the release of every new home video format, tinkering like a man trying to achieve unrealistic perfection in his masterpieces. Initially, his efforts were welcome, with the re-mastered editions of his films looking quite phenomenal. Unfortunately, it soon became apparent that Lucas had a ‘Jabba the Hutt’ like appetite when it came to editing, and the changes took a turn for the dark side when prequel Anakin Skywalker actor, Hayden Christianson, was creepily edited into Return of the Jedi(1983), replacing poor old Sebastian Shaw.

Sadly, this was but one of the many changes that left long time fans mortified, and somewhat disenchanted with the franchise.

With George Lucas holding Star Wars so close to his chest, the sale of his company to The Walt Disney Company was an absolute shock for everyone. Many interpreted the enormous USD 4.05 billion payday as the primary incentive for the aging filmmaker, but it wasn’t quite as fans had imagined.

Recently George Lucas announced that the majority of the money from the sale will go to charities that focus on world education, which seems quite noble.

Other fans are worried that The Walt Disney Company will ruin the Star Wars franchise with kiddy themes, but I feel that these fears are a little ridiculous, and quite unwarranted, especially considering that the company has done right by the many assets it owns, including Marvel Entertainment.

Rest assured, The Walt Disney Company will want to protect the integrity of its investment, and you won’t see Chewbacca dancing with Mickey Mouse in the next Star Wars film, much like you didn’t see Goofy don the Iron Man suit in the Avengers movie. Furthermore, over the years, the company has given proper respect to a lot of older films in its catalogue, which is more than I can say for Lucasfilm Ltd itself.

Personally, I am quite excited about the announcement that Star Wars Episode VII is scheduled for 2015. Rumour has it that the story will feature an older Luke Skywalker as well as new characters, and an overall focus on the next generation of the Skywalker family.

I feel that with a solid creative team, Star Wars will most definitely make a triumphant return to the silver screen. Hopefully we will see Mark Hamil, Harrison Ford, and Carrie Fisher in the roles that started their careers very soon. I also think that Joss Whedon was born to direct this film. If you don’t agree you should perhaps watch the short lived Firefly TV series.

That being said, I am also quite sure the new films will retain the essence of the older films, with George Lucas involved in just the right dosage. In the end, I hope George Lucas has a happy retirement from full time work, and that the force is always with him.