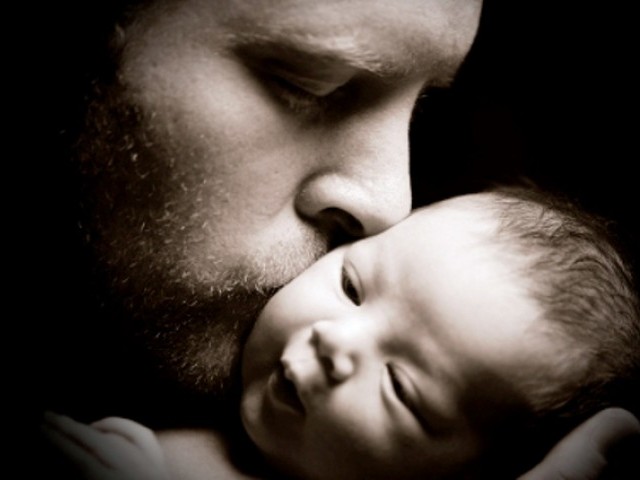 After the baby was born, it only got more difficult for me. Now, not only did I have to make my wife happy, I had another innocent baby to keep happy as well. PHOTO: AFP

Fatherhood has been a very esteemed title in the world for a long time. Almost every civilisation had some sort of nobility associated with fatherhood. Fathers are seen as strong, diligent protectors. They are the supermen to their children.

But how much of this is based in reality?

It’s been a little over a year since I became a father. My baby boy is growing up fast and every minute spent with him seems like the best time of my life. Just like every child, he’s learning new things and new ways to impress and swoon us. Come to think of it, he is the proverbial “bundle of joy”.

However, the path to fatherhood was not an easy one for me. Obviously, you cannot compare the hardships of pregnancy and childbirth borne by the mother to what a father goes through, but the fathers, too, have their crosses to bear.

We had been married for just three years when we found out that my wife was pregnant. My wife initially thought it was a bit too early to have a child, but I kept consoling her by giving one rhetorical reasoning after the other.

My wife had high aspirations and wanted to have a career of her own first. Being pregnant changed that and changed the way she viewed everything. This started showing in her mood swings, the way she carried herself and her attitude towards me. I had to be the “man”, and by virtue of being a man, I had to be ‘strong’ and capable of bearing all this. In retrospect, I wasn’t ready to be a father myself, however, I was in denial.

I didn’t want to appear as the guy who runs away from the hard challenges of life. I kept idealising other fathers in the circle of my family and friends. Most of them, when they had their kids, were about my age, and some were even married for a far less period than I was. So why was it that they appeared to be content and excited while I was still unsure and nervous?

I did a little analysis and when I looked at our culture, I noticed that most men don’t have to worry about having kids. Usually, men only have to provide financial support to their wives and children; they’re not responsible for helping raise the kids since, according to our culture, it’s the mothers’ job. A father usually goes to work, comes back home, plays with his children for a few minutes and then goes to sleep. So, of course, those fathers I knew were content, and the ones who didn’t fit these criteria actually loved kids and genuinely wanted to have them.

My wife’s pregnancy was a difficult period for me. I was pretending to be happy in front of everyone. I had to look and feel elated in front of my wife because she was going through the actual pregnancy; my worries were nothing compared to her’s. I had to appear content in front of my family, because they were looking forward to seeing us becoming parents, as that’s the gauge of a successful marriage in our culture.

I had to appear happy in front of my friends as well, because if I told them my true feelings, I would get a lecture on Islamic teachings and how it was our religious duty to procreate and be thankful to God. So all this pretending put me in a very odd mental state.

I was with my wife physically but not mentally, I would meet my family but that, too, was just to assure them that we were all fine. All the while I kept thinking to myself whether there was a way out of this; could I catch a break for just a moment? But the truth was, there was no way out of it. I started getting into arguments with people whom I usually wouldn’t argue with, and slowly just became reclusive. The thought of an abortion went through our minds as well, but the religious upbringing quickly shunned it. Whether that was the right decision or not, is perhaps a topic for another day.

After the baby was born, it only got more difficult for me. Now, not only did I have to make my wife happy, I had an innocent baby to keep happy as well. I could’ve taken the traditional route with the ‘hands-off’ approach, but I never had that cultural male role in my mind for myself. I wanted to be a part of raising my child, I wanted to change his diapers, wake up in the middle of the night to console him, to play with him for hours. But with the entire emotional roller coaster during the pregnancy, I was too exhausted to take up that role.

I couldn’t give proper attention to my wife or my child. I did wake up in the nights to console by baby, I still changed his diapers and fed him and played with him. But I did it only because I had to, not because I wanted to. If it weren’t for my wife, I would probably spend the rest of my life in this state of mind, subconsciously ignoring the real responsibilities of my life and just chugging along. She was the one who saw the telltale signs in me and gave me direction and brought me back to being myself.

I’m glad my wife had the intellect and patience to better understand what I was going through, for bearing with me and also having the courage to make me realise what was actually going on with me. However, I’m sure there are a lot of men out there going through or have gone through the same without any support or anyone actually understanding them. To them I would like to say, you’re not alone; fatherhood is tough stuff, just hang in there. And to their wives I would like to say, fathers are humans too. Yes, what you go through during pregnancy cannot be compared to anything else, but just like you, father’s are also scared. They, too, need attention and support.