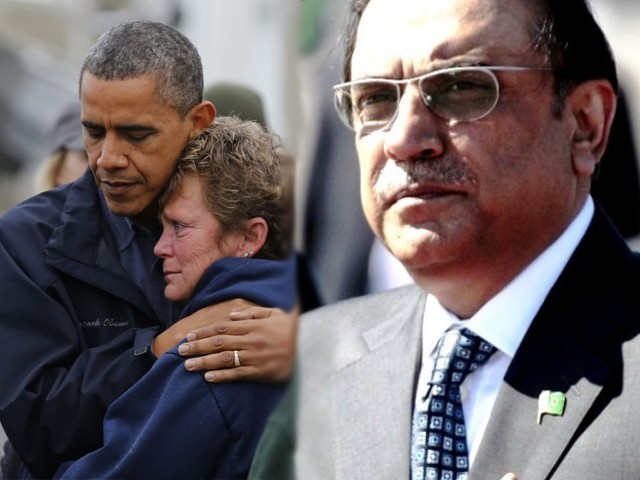 The swift response of the leadership here to Hurricane Sandy makes me think back to the lack thereof during the disastrous flooding in Pakistan in 2010. DESIGN: ERUM SHAIKH

Earlier this week the East Coast of the United States battled Hurricane Sandy. A storm of epic proportions dubbed by American’s as ‘Frankenstorm’, Sandy ripped through the Caribbean, Cuba, and East Coast wreaking havoc on the way.

New York City blacked out and 80 homes burned to the ground as fire fighters were unable to reach the area. The iconic boardwalk from Seaside Heights, also known as Jersey Shore is now in pieces; people are without power and many are homeless.

In response, much to his party’s chagrin, New Jersey’s Republican Governor Chris Christie set aside partisan politics and worked with the Obama Administration to ensure an immediate and efficient response to keep his citizens safe. Unlike the government response in Pakistan to natural disasters and fires, lives in New York and New Jersey were undoubtedly saved because these mattered more than political differences.

The swift response of the leadership here to Hurricane Sandy makes me think back to the lack thereof during the disastrous flooding in Pakistan in 2010. The president of Pakistan wasn’t even in the country when people were drowning and starving! While Chris Christie and Michael Bloomberg (Mayor of New York City) acted in the best interest of their citizens, Pakistan’s leadership dragged their feet in sending aid to the flood affected areas, so much so that the army had to step in.

A slow response to any kind of disaster costs lives. We saw it with hurricane Katrina and we saw it with the response to the earthquake and tsunami in Japan. The Japanese government has been criticised of a slow and ineffective response to the tsunami, for covering up extensive damage to the Fukushima Dai-ichi Nuclear Plant, and for taking 18 months to recognise the heroic “Fukushima 50”, employees who risked their lives to prevent the plant meltdowns from spiralling out of control.

On that same token though at least some of the management appeared to show remorse. In March 2011, Managing Director Akio Komiri wept as he left a press conference briefing journalists on the situation at Fukushima. Other officials eventually conceded that the disaster was handled poorly and that the country was overwhelmed by the earthquake and tsunami and they were not equipped to handle the meltdown.

While the leadership’s response in Japan was subpar at best, the response in Pakistan to the flood was not only inefficient but also embarrassing. Government claims of assistance and aid were refuted by leaders, such as the National Party President Abdul Malik Baloch of Quetta, in the flood affected areas. Other government officials lambasted the United States for providing aid and relief and some outright denied that the US provided any financial aid at all. The entire thing was a hodgepodge of PR disasters resulting from an obvious lack of care and larger than life egos. Our government was just unable to put the people above themselves; they refused to set aside their differences and unite for a common cause. Thus many many people who deserved their help, died.

And of course, the Pakistani leaders didn’t learn from their mistakes.

In September 2012, the Baldia garment factory fires took the lives of 315 people. In conditions reminiscent of the 1911 Triangle Shirtwaist Factory Fire in New York City, emergency exits were locked and workers were unable to escape the fire. While leaders like Komiri in Japan weep and bowed down to employees over their mistakes, factory owners like Shahid Bhaila not only locked emergency exits and kept workers in outrageous conditions, Bhalia also reportedly prevented inspections of the factory from taking place. Adding insult to injury, Bhalia and his brother blamed the fire and casualties on the “lazy fire brigade” of Pakistan and refused to accept any responsibility for the heinous working conditions and their mistreatment of workers!

While Pakistan’s leadership and factory owners may not care about ordinary citizens, its people certainly do. This is the nation that produced Abdul Sattar Edhi, one of the great philanthropists of the world. Over the past few years, the people of Pakistan have united in the face of tragedy. The evidence lies in our reaction to Malala’s shooting and Rimsha’s persecution. Pakistani’s need more leaders that care about our interests and less about their capital gains and political triumphs. We need more leaders that accept that we’re entering a time of enhanced climate change and are ready to prepare for it because I assure you more storms and tragedies of such calibre are in our future.

Pakistan’s general election is three and a half months away. Remember that in the aftermath of the 2012 floods President Zardari responded slowly and inefficiently. He let people starve. In fact, the response was so slow that known terrorist organisations stepped in to help! This is also a government that let minorities be left behind to die and expelled from relief camps.

So, as all of you make your way to the polls next year, vote for whomever you think has your best interests at heart; vote for the person that isn’t running for personal gain and to line their pockets, but to make the country a better place. Every vote counts and when it comes to the health of a nation and its people, nothing is more important than sincerity.